Western Hills Motel is on Route 66 in Flagstaff, Arizona, and has a very nice sign which is supposed to be especially impressive at night (but of course I was there at around noon)… that’s about all I can tell you. (I’m guessing the horses are animated to look like they’re walking?)

This place was supposed to have award winning greek food in addition to some pretty impressive neon, but apparently five years ago they switched from Greek to Mexican ……because (and I say this sarcastically) what Flagstaff really needed was YET another Mexican restaurant…

When I stopped here I was REALLY looking forward to some good Greek food. Sigh

Louie the Lumberjack Statue is …. well… not very big, only 10 feet tall and made out of cedar … while his two brothers who are both used by Northern Arizona University as their mascot, are both 20 feet tall … no wonder he looks sad

Louis is on Route 66, right after this intersection (going east)

Miz Zip’s is a historic diner on Route 66, reputed to have good food (I didn’t eat there)… 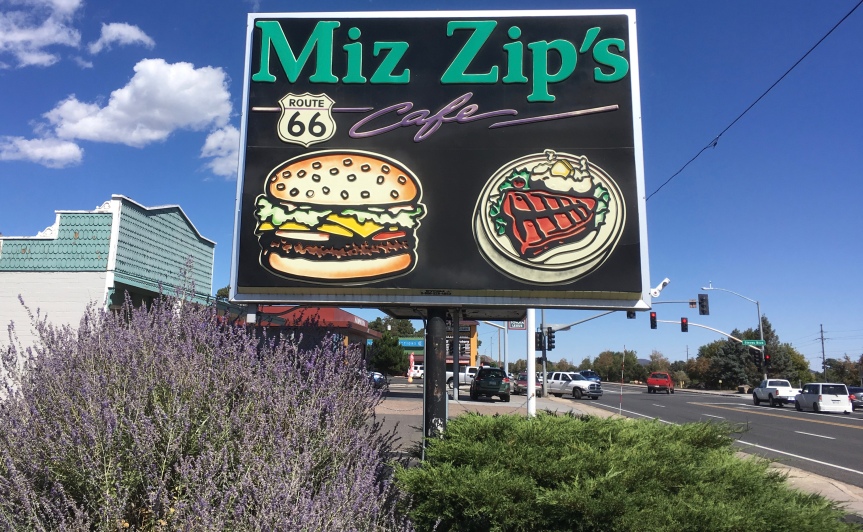 that is one of the more famous locations because of its neon (which I arrived at the wrong time of day to see). 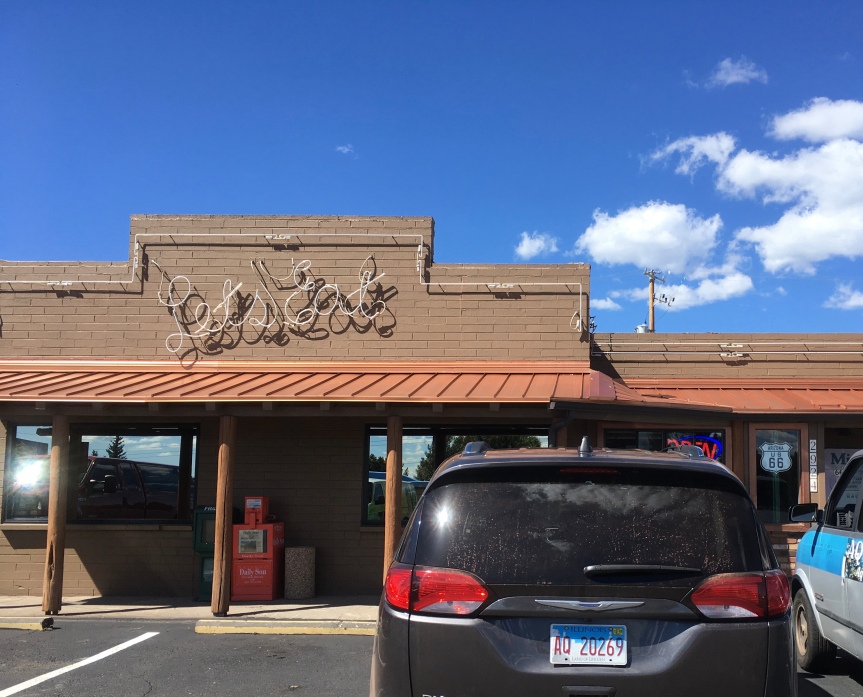 That said, when I got there and saw their menu (which has all I got all excited because it said buckwheat pancakes on the menu, which are much better for you than buttermilk, much lower sugar/carbs. So I tried to order one and she said “I’m sorry we no longer serve those” … SIGH, I got back in the car and back onto the road…

Let’s face it, but for the song, Route 66 wouldn’t be the draw of international travelers that it is… I mean you don’t see vast numbers of people coming to the US to travel on the Cumberland Road, or the Lincoln Highway for that matter … that said, if you’re doing 66 you HAVE to make sure you pull of I-40 at Winona
“If you ever plan to motor west
Travel my way, take the highway that is best
Get your kicks on Route sixty six
It winds from Chicago to LA
More than two thousand miles all the way
Get your kicks on Route sixty six
Now you go through Saint Looey
Joplin, Missouri
And Oklahoma City is mighty pretty
You see Amarillo
Gallup, New Mexico
Flagstaff, Arizona
—-Don’t forget Winona —-
Kingman, Barstow, San Bernandino
Won’t you get hip to this timely tip
When you make that California trip
Get…”
[Keep in mind I started in California and am headed East]

SO… I’ve done it… I’m sitting on a road in the middle of downtown Winona Arizona, and suddenly understanding why the line of the song is, “don’t forget Winona”. There is almost NOTHING here. 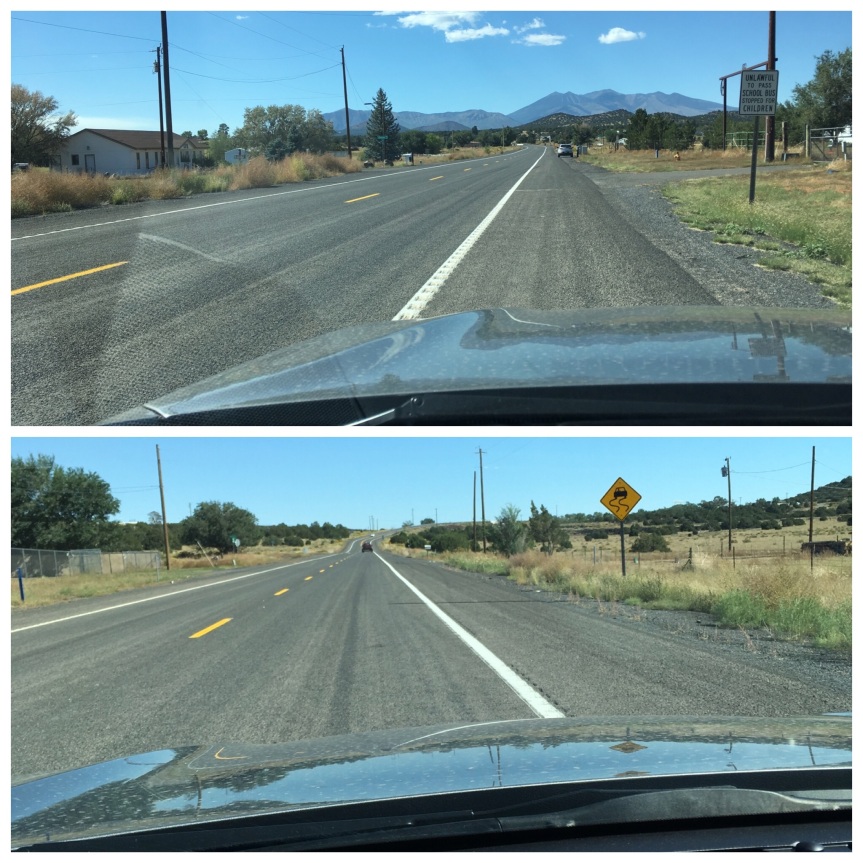 In fact for the most part it’s a Gas Station directly adjacent to I-40/Route 66…  and then if you stay on the road all you see is a few houses. That said… 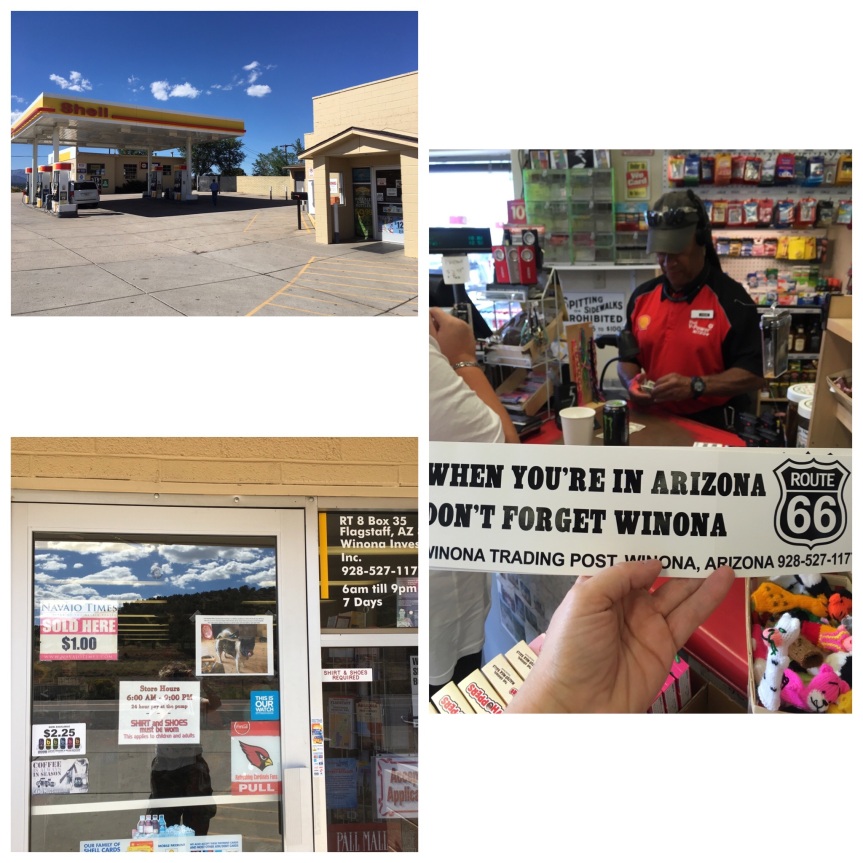 When I went back to the gas station I told the guy that I was sure I wasn’t the first person to say this, but they really needed to put a sign outside that said “don’t forget Winona” at which he laughed, and said, “you said the magic words” and he gave me this bumper sticker

The Arizona Divide is on Route 66/I-40, and is located just west of Flagstaff, Arizona. It is a geographic location marking the point where water either flows toward the Colorado River watershed or to the Gila River watershed

As I was headed towards Flagstaff I hit a massive traffic-jam.

Somehow, a truck had overturned, and if you look at the photo you can sort of see that there’s a huge crane parked in the middle of the highway trying to right the truck and all the traffic has been redirected into a single file that passed it by riding on the highway’s curb/pull over section. 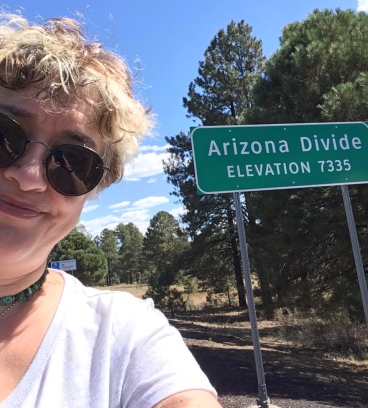 A minute or two later, I realized that no more cars were driving past me. The road was COMPLETELY empty and stayed so for I don’t know how long, because I only hung around about 5 minutes before heading towards Flagstaff. I wasn’t driving very fast, and after a bit pulled over again, wondering when the traffic would flow… and took more photos — and even watched a train head towards me and pass under the highway

I.e., I was VERY lucky in passing it when I did cause I could have been sitting there MUCH longer/

This is a private Museum to all things McDonald’s located on the property that HAD been the location of the first McDonald’s. It is NOT owned or operated by McD’s corporate. The actual building had been destroyed in the late 70s — and this building doesn’t even look like that one did…  but it is on the original property of the burger joint owned by Dick and Mac McDonald, who essentially invented the fast food model… that Ray Kroc took international — AND the sign out front includes elements of the original sign.

The museum was created by Albert Okura, who owns both a chicken processing empire and a string of chicken restaurants in the California, who bought the property and created this museum. Okura is a philanthropist who has invested a LOT of money into revitalizing sites along Route 66 — in addition to this one he OWNS the town of Amboy where Roy’s Motel is located and is responsible for its renovation and upkeep.

I came here as part of my Route 66 road trip. I have to admit I was kind of let down. The website I found this one did NOT make it clear that this was not the original building. 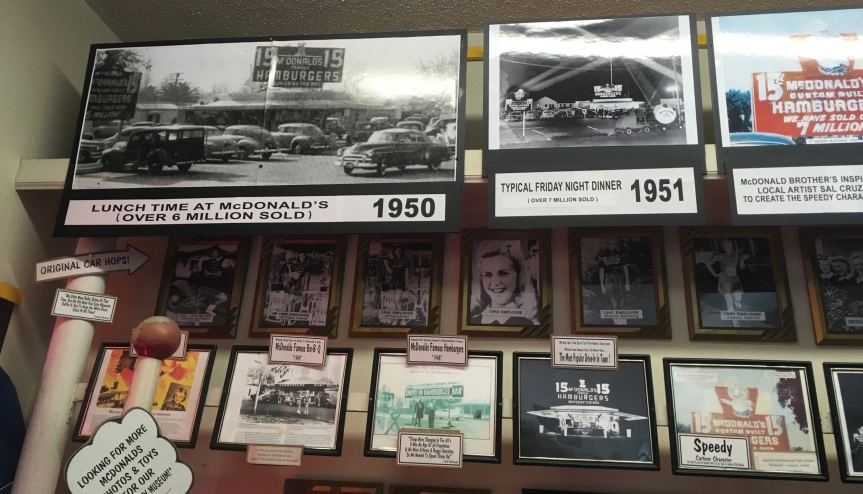 And then, I was kind of irritated to discover that the collection is completely un-curated. When you walk in what you see is a collection of display cabinets chock-a-block full of stuff… as though it were a store selling collectibles rather than a museum of them 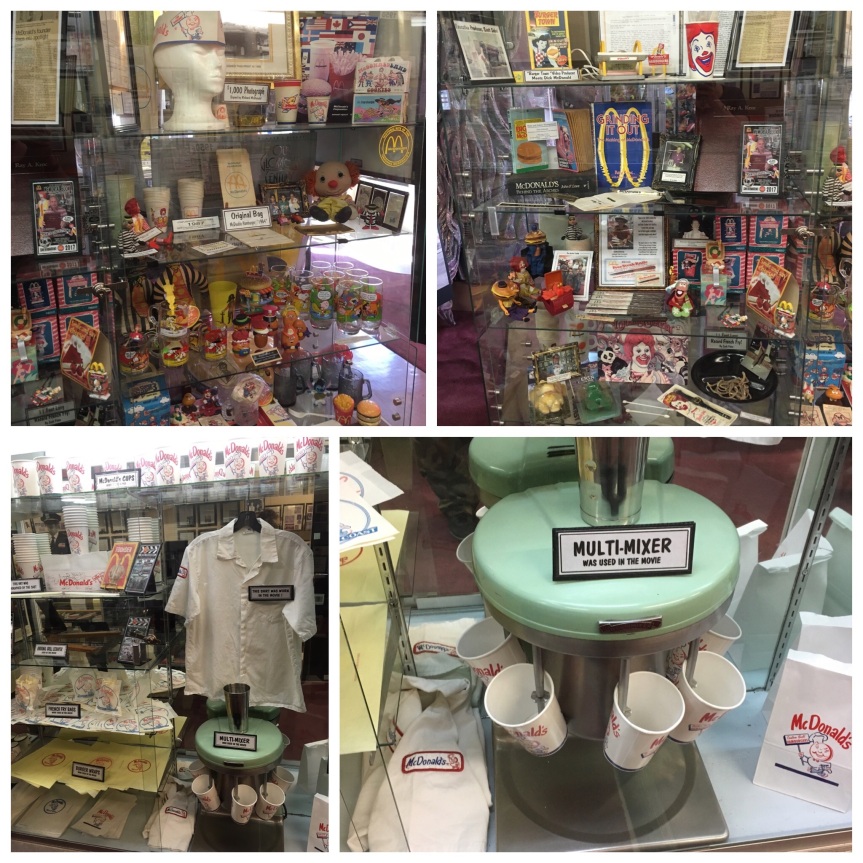 Essentially… They built the building they put some stuff in it and then over the years people have been bringing and/or sending them stuff to add to the collection… so that at this point they have McD’s related stuff from all around the world. Only they completely lack the space to display it in any sort of meaningful way. 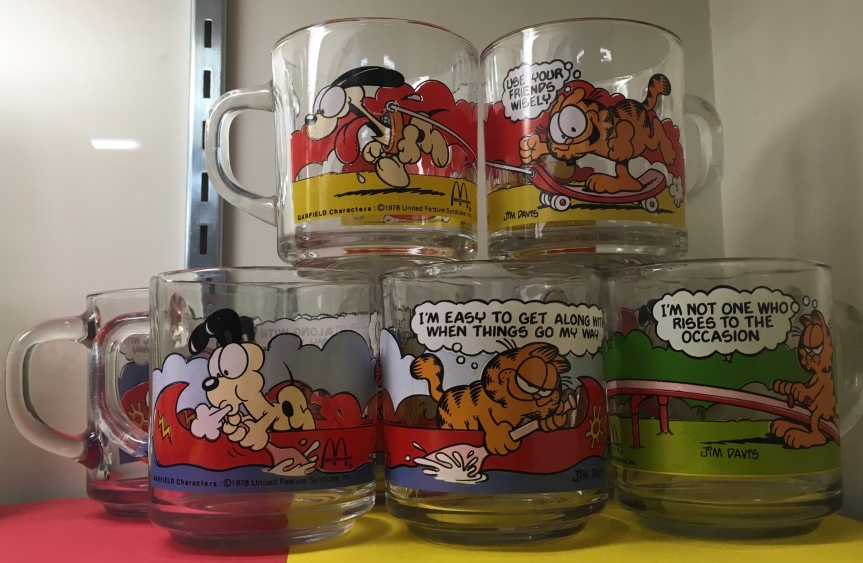 THESE were my favorite items because we used to have them at our house. I have a feeling my brother ended up with them, which makes me sad… but that’s why G-d made eBay… apparently you can get the full set for like $20