Driving down the trans-Canada Highway, route 1; Nothing here but big sky and rolling green land

Why yes, its a beautiful drive… through open country

Meeting up with an old friend I haven’t seen in years…. I will say this about the Bay Area… if you don’t like the weather drive 15 minuets, it’ll change. I was staying at the home of another old friend in the South Bay area, and drove north to Pacifica, which is right next to the ocean. We met at her home, had a long chat and then walked the TWO blocks (yes life is hard for some people) to the sea-side.

The temps in Sunnyvale (which is in the South bay) were 77 F when I left about an hour ago, here in Pacifica it’s 64 … this difference is because of the fog that coats the place almost none stop during the summer months

There was a group of whales out there— we kept seeing multiple poofs of water as they spouted….. and then I saw the whale’s back out in the distance, for just a second… and we kept watching and then saw jumping whales and their heads as they tried to scoop up the fish and then their tails when they dove back in—- but it was so far out in the ocean that I seriously doubted that my little iPhone camera picked up anything — and it didn’t

Just at the edge of the seashore was this statue: 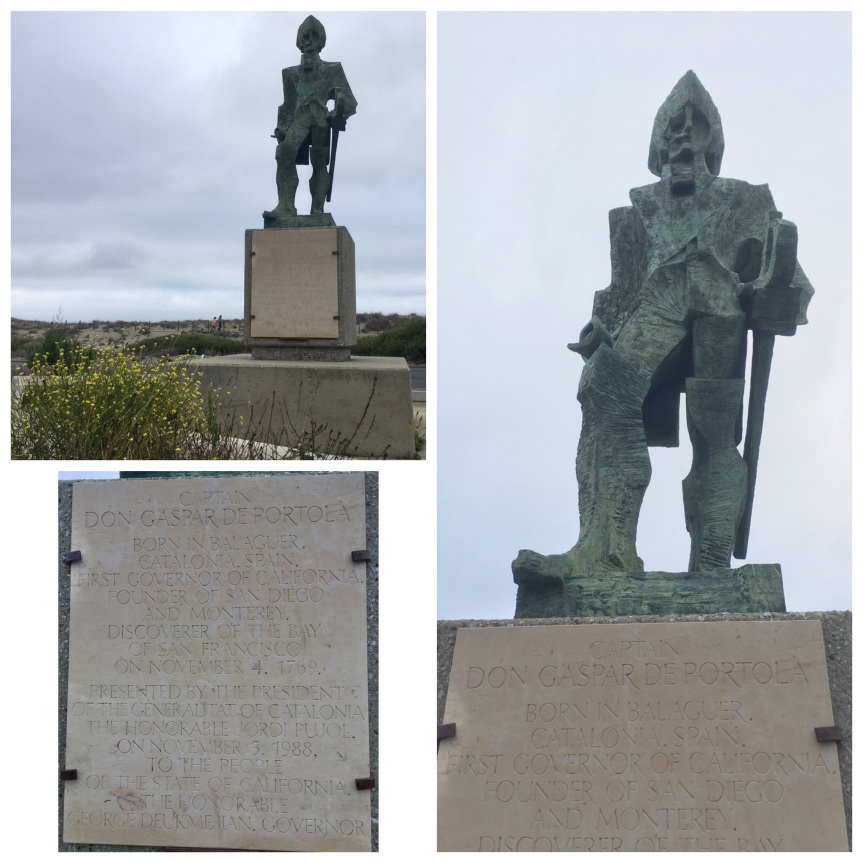 Captain Don Gaspar De Portola
born in Balaguer, Catalonia, Spain
First Governor of California
Founder of San Diego and Monterey
Discoverer of the Bay of San Francisco on November 4, 1769
Presented by the President of the Generalitat of Catalonia
The Honorable Jordi Pujol on November 5, 1988
To the People of the State of California
The honorable George Deukmejian Governor

That said, on the way back, my Subaru saved my life again today… was tired, driving home from Pacifica, didn’t notice cars in front of me on the highway suddenly slowing down, my car threw on the brakes and set off alarms, I threw the brakes on harder…. a tour bus was on the side of the road with the door to the luggage area completely open blocking a lane of traffic….

And then, when I got home to my friend’s house, where I’m staying… I found the family in bathing suits… “we’re going to go hot tub, care to join us?” My first soak in a hot tub in about a year — life in California is so hard