Katoomba is a cute but small town, located about an hour and a half by car from Sydney (or 2.5 hours by train) about 2 kilometers from one of Australia’s natural wonders (which I of course was visiting), whose major industry is tourism. It’s a lot less tourist-trappy than most towns of this sort, while still having a sort of enough to keep visitors happy.

NOTE: I’m writing this blog post well AFTER the fact. I was In Katoomba from January 12th to 18th of 2018 — about 5 months ago. BUT, because of the massive concussion I suffered only one week later, on Jan 25th… I have fallen woefully behind on the posts for that the Australia trip … but as I’m currently holed up in the Chicago area (i.e., my home base) doing things like doctor’s visits — including some related to the post concussive syndrome which I am STILL suffering from (albeit very mildly at this point, thankfully) I am taking the opportunity to rectify that…

The downtown area begins, essentially, at the top of a VERY steep hill, where it runs a bit alongside the rail road tracks, and then extends about a half mile South, down hill, in the direction of the natural attractions. (Other than a local movie theater, there’s little of any interest to none locals on the north side of the tracks).

Getting around:
And of course I am ASSUMING you don’t have a car… if you do you can just skip this part

Getting from Sydney to Katoomba by train is actually a rather easy and enjoyable ride (see blog post). One of the things to remember is that IF you’ve already been in Sydney over the course of a week, and have actively been using the rail systems “Opal” transit card, once you have used it for eight trips in the course of one week (Monday to Sunday) you to qualify for 50% off on all trips for the rest of that week…  including the price of the rail trip out to Katoomba and back.

That said, while there are also some bus routes you can take from the station to get you to your Airbnb or hotel, most of them stop running around 6pm … which I learned the hard way, when I arrived on a 6:30 pm train and ended up having to drag my heavy suitcase the 20 minutes it took to walk (almost a full mile) to my Airbnb… Luckily it was all down hill or I would broken into tears (the Airbnb host had COMPLETELY neglected to mention that fact in spite of my having told her what train I would be arriving on).

That said, I soon learned (not from her) that there are TWO 24 hour taxi services which will pick you up from pretty much anywhere, and run you home (I STRONGLY suggest keeping their phone numbers with you). The one you’re most likely going to be using is the Wentworth Falls Taxi, +61 (0)2 4782 1311; as the other, Blue Mountains Maxi Taxi, specializes in large wheelchair accessible vans that can accommodate up to nine passengers, +61 423 890 670, although they’re perfectly happy to pick up just one.
Places to eat:

First off, this place is TINY and popular. As such, unless you come on a non-vacation weekday and get very lucky… you WILL need a reservation (call +61 405 402 130) The time I opted for the basic home-style dishes my ex-boyfriend’s mother used to make regularly…   Mandu-guk (it’s a dumpling soup) and Japchae (which they spelled japjae)… I also ordered Kimchi, as this is the first Korean place I’ve ever been too that does NOT include the obligatory Banchan side dishes for free… and an order of Ginger Tea. That said, if you look at the reviews on Trip advisor, and pay attention to the ethnicity of the writers, you’ll see the western customers seemed to be way more enamored with the place than the Koreans (did I mention no obligatory Banchan?). For myself, the Madu-guk and Japchae were fine (they are two kind of hard to screw up dishes) but the Kimchi is SO incredibly mild that I could not smell it, or taste any of the red pepper.

For those who don’t get what I’m talking about, proper Kimchi should STINK, and at least mildly burn your mouth with the heat of the pepper. I had a Korean roommate back in college who initially kept a small bottle of Kimchi in our fridge, which because of the layout of the dorm room was in the same tiny room as our closets… we quickly banned the practice and forced her to keep it downstairs in the dorm room of some other Korean girls, because the stink had passed through the refrigerator’s walls and all of our clothes were suffering from Aux-d’kimchi. Additionally — keep in mind I lived in South Korea for almost three years while working as a professor, one of the first signs that I was back ‘home’ after spending some time in the States visiting my other home, was walking into an EMPTY elevator and being accosted by the scent of the Kimchi that some previous occupant had left behind (usually sweated out, like an alcoholic’s stench, or way too much cologne)

This restaurant would have been worth trying if only because it’s a piece of Australian history.

It was the countries oldest continually serving Cafe (101 years when I went), the place is quaint beyond belief and is like a walk back in history to the 1900’s. 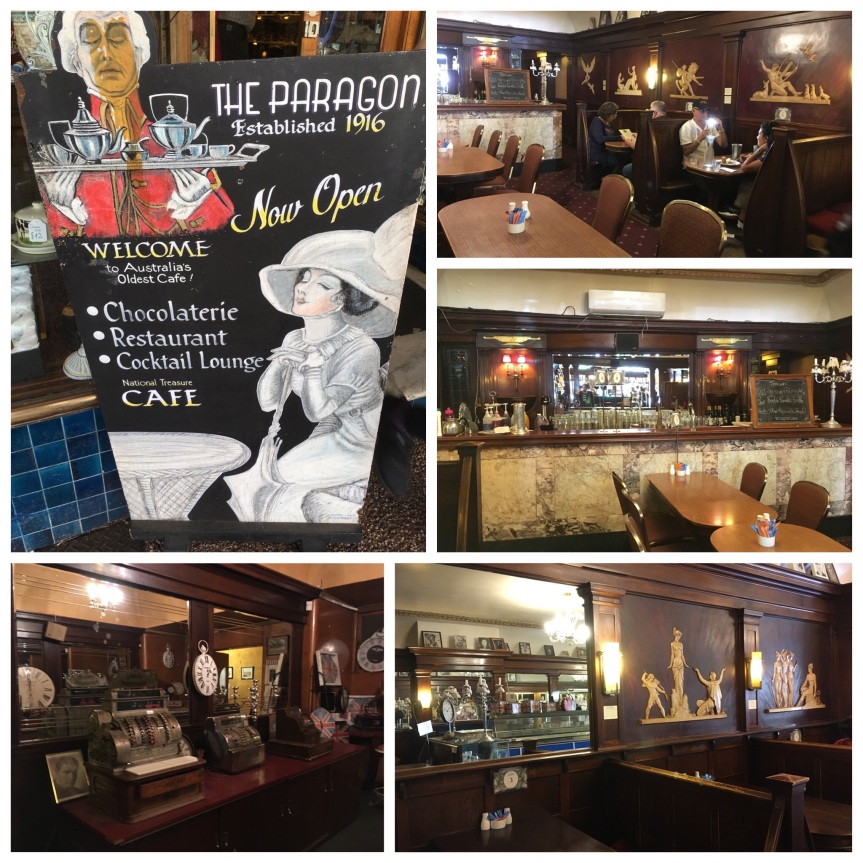 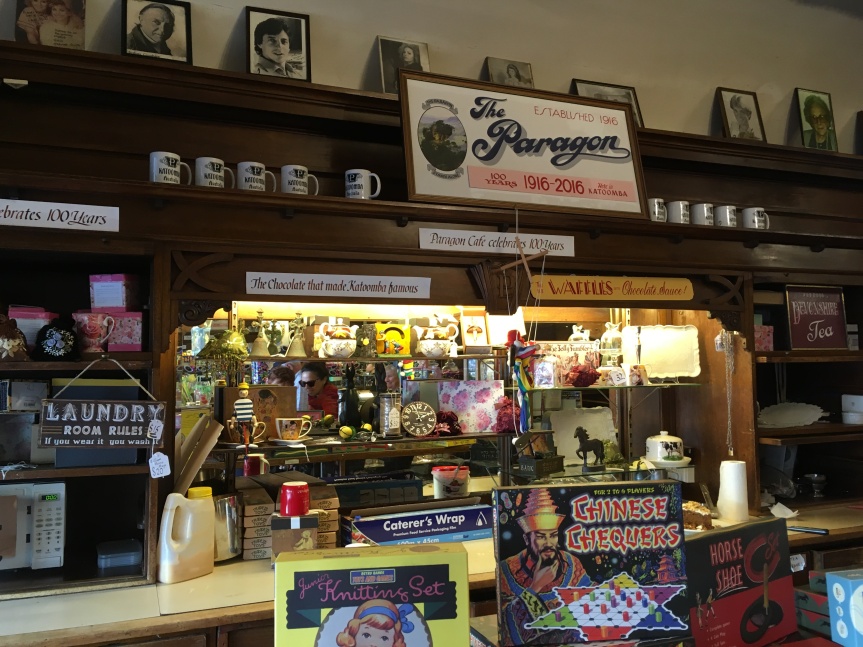 established 1916 … the place had changed hands at least four times already, and according to this new report, shortly after I visited the current owner was being forced to leave by May 27 (over a week ago) because the business owner could no longer afford the rent, and whether the place will be maintained in its current form is in doubt. 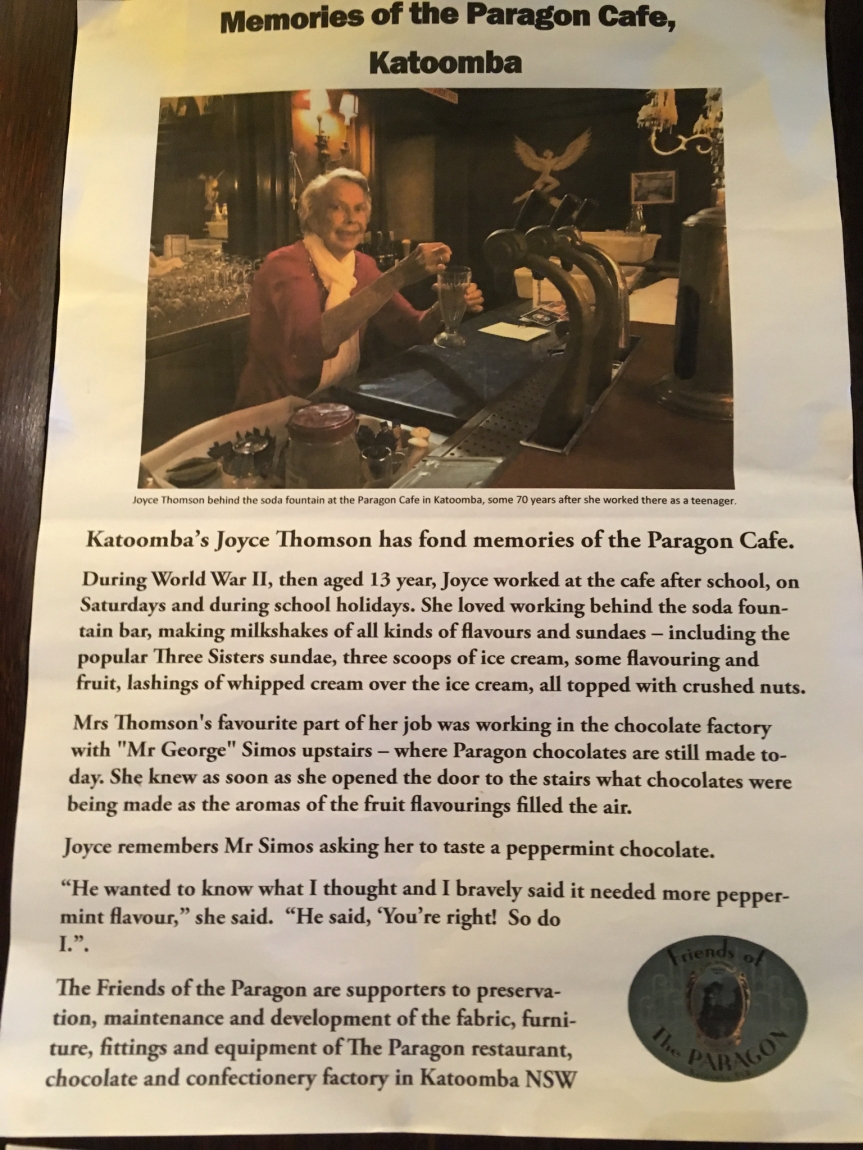 That said, I thought the food here was ok, WOEFULLY overpriced, and in spite of that nothing to write home about (the fact that it was struggling was therefore not a surprise). If you look closely at this menu (below) you’ll know what I ordered.

When I finally spotted this place, located at the far south-east corner of the downtown area I decided that I was in love; This is a former church that for lack of congregants was converted into a cafe, that surrounds a gingerbread house/shop devoted to all things ginger!! (And as my friends know I LOVE ginger.) 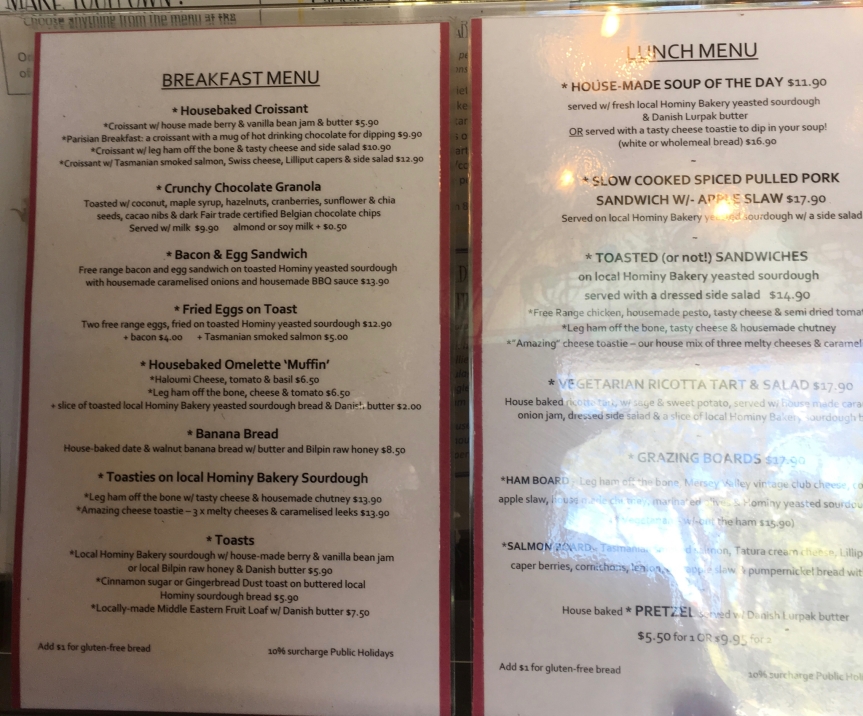 While there I found what may be the ultimate ginger drink, it’s called Rochester Ginger and (according to the company), it’s recipe is based on one made by Dickens himself … which I would happily drink regularly but for the fact that it’s $9.40 for a small bottle, about as pricy as wine …  when I got home I found Amazon has it  for slightly more. … By the way 1 cup = 236 ml, so this stuff is a bit over 177 calories a cup (while Coke is about 96 calories a cup) 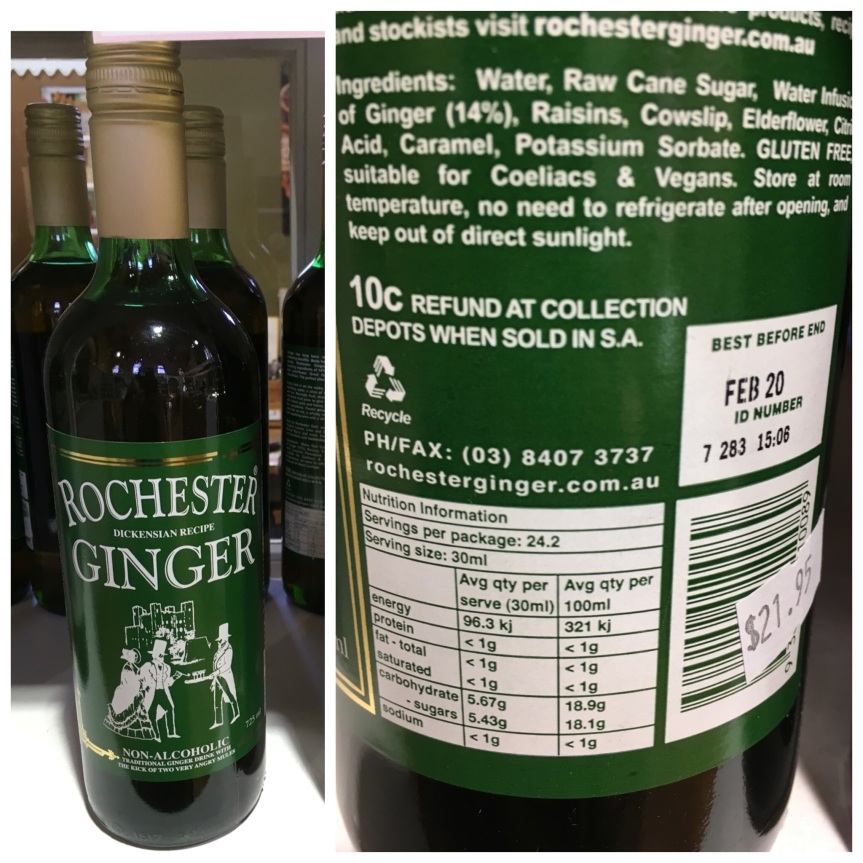 they also had me try this organic ginger ale assuring me I would love it, but it was blah.

There was also a ginger flavored Turkish Delight which was ok, but after the Rochester everything paled.

Based on the amount of business they do, this restaurant located not far from the train station seemed to me to be one of the most popular places in town. Their “specials” didn’t seem to change much Kangaroo burgers and pancakes with ice cream), and what finally drew me in was the burger. (Not my first taste of ‘skippy‘, which is what all the locals seem to call it, that was at Pins On Lurline, an upscale restaurant located outside of the downtown distract in what was once a private home … hence not included in this blog)

The burger was less a burger than a sliced meat sandwich, with little rounds of kangaroo meat… not all that tasty and very chewy. While sitting there waiting for my food, I spotted this girl sitting next to me. I asked her if it was alright for me to take the picture and she allowed it… 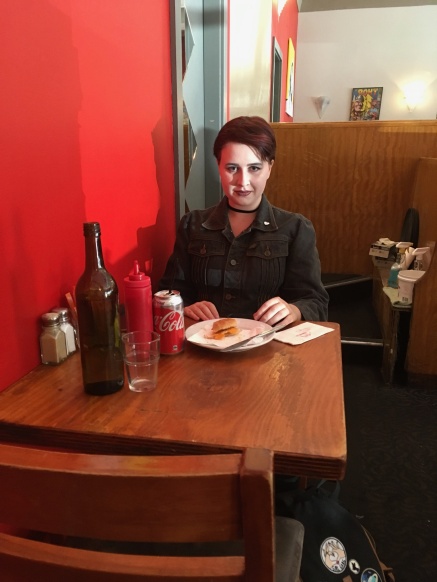 The picture is completely untouched … the light was just perfect … and I of course allowed her to send a copy of it to herself.

Carrington Hotel
Let’s hear it for hotels that could not afford to update their facilities, until the fact that they had not becomes they’re selling point. Looking at the Carrington it’s pretty clear that’s the reality.

I of course don’t know this for sure but after walking around the place I’m willing to take a bet that once the building was old enough to qualify for a World heritage landmark listing, and restoration funds that come with it, that that was probably the first time since 1927 that any serious renovations of the property happened…. and we should all be grateful because walking through its doors is like stepping back in time. According to Wikipedia it’s the only 19th century grand hotel still in use in all of New South Wales. 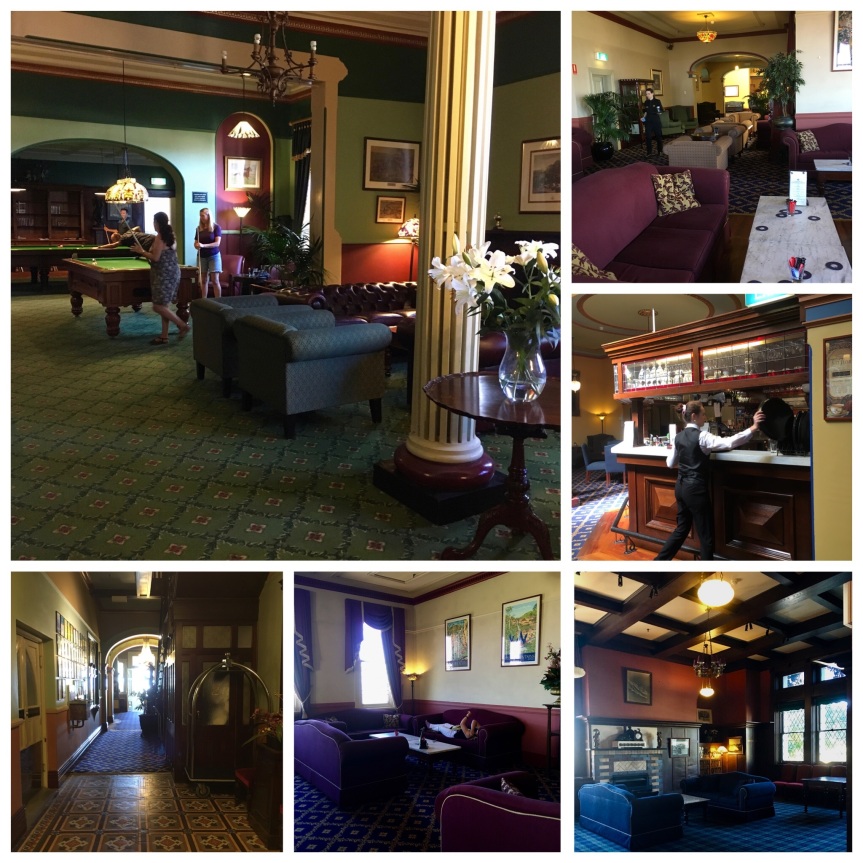 This massive hotel property is located right in the downtown area, a meer steps away from the train station. 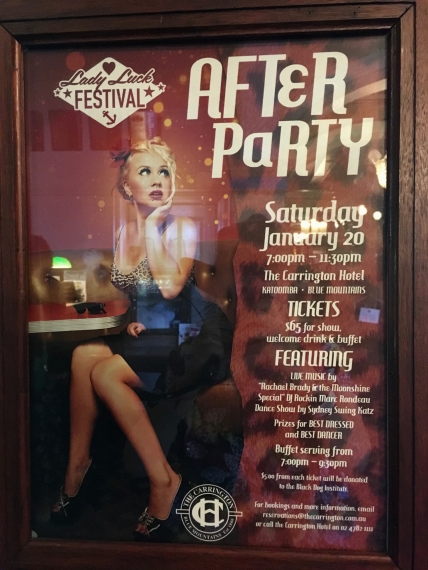 The Yellow Deli
The interior is VERY cute and Hobbit-warren like, and every food program (Yelp, TripAdvisor, etc) ranked it as the most popular eatery in town (must number of reviews, with almost all of the people giving it positive votes).

I had arrived in Katoomba on a Friday night, and was mystified to find this place closed, but once I finally stepped inside I understand why. Every single man working there had a beard, a pigtail and was wearing very similar natural fiber clothes; That and the fact that women were all dressed akin to Mormons in terms of coverage, sent off a bell in my brain saying, “this is a restaurant owned by a cult.”

So I asked, and it turned out they’re a religious group founded in Chattanooga Tennessee. They keep sabbath Friday night to Saturday…. like Jews, but they are not vegetarians like the 7th day Adventists (of whom there are many in the Chattanooga area)… at least based on the menu of what they were serving. They only believe in the old testament not the New Testament but don’t consider themselves to be Jewish… but rather they consider themselves to be Christians. The guy I spoke to, the manager, who was VERY excited that I had keyed into the cues that they were probably a religious group and asking about their beliefs, gave me a bunch of reading material
All that said, they make a very good Carob hot chocolate.
Can Blue Juice Bar
I really liked this place, I liked it enough that I ordered their fresh watermelon & ginger drink more than few times. You tell them what you want, and they throw the ingredients in a blender and serve it up.