To quote my friend, “They must have very smart animals around here!” You just have got to love signs like this that don’t say what they’re supposed to because of bad Grammar.

My friend immediately realized the unintended joke as we were driving down the road. I beg forgiveness as it was only a few weeks after my MASSIVE concussionmy MASSIVE concussion, so my brain wasn’t very quick on the uptick. I didn’t get it till he pointed it out.

(and why yes, I’m STILL backlogged … this happened almost a year ago)

I’m no longer sure WHO started the trend, if it’s an Americana tourist trap thing that Australians began to copy because it draws in the tourists, or visa versa … but I’m happy to announce that the Australian countryside is just as inundated with these big fiberglass monstrosities as the US is, there are in fact 150 of the things scattered around the mainland, according to wikipedia. 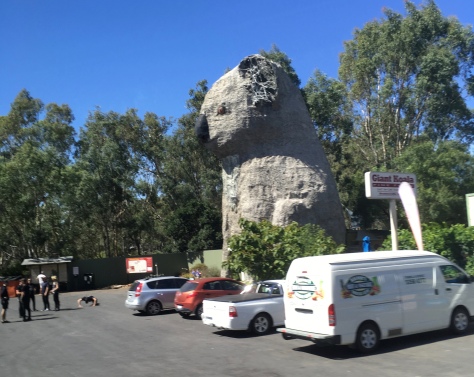 The first big thing I spotted was via the window of a bus/coach that I was taking from Ballarat to Adelaide (it actually involved a one hour train ride and two connecting busses — bleh) … my friend in Ballarat, knowing my like of these sorts of things, had mentioned the bus might pass it… but the driver offered no warning and sadly the it only pit-stopped at the location in order to pick up new passengers, with no chance given to get off and take pictures… so this is the best one I managed to get (there were two others but they were all blurry because the bus was moving).

And then earlier today while road tripping on Australia’s Great Ocean Road with my travel buddy (so far it’s all good, hoping we do this regularly), we unexpectedly drove past a second big thing, a Lobster by the name of Larry …  who according to Wikipedia is the worlds largest lobster!!! 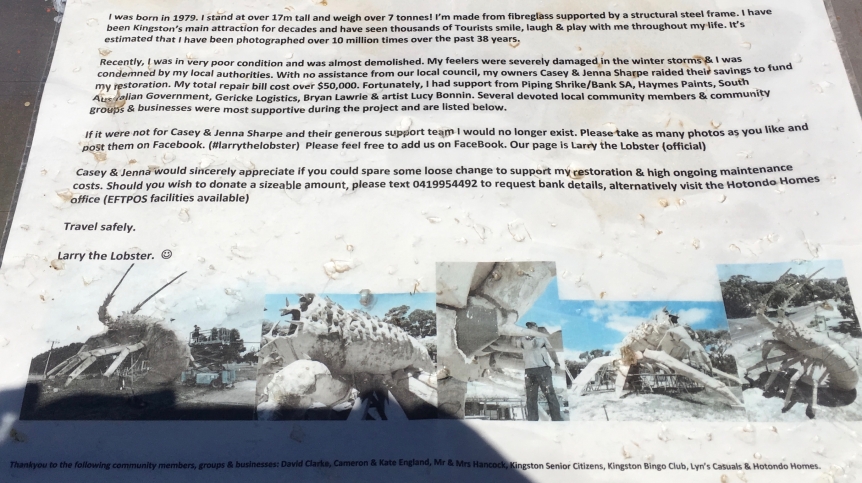