Adjacent to Ethel’s Old Corral bar and restaurant on Alfred Harrell Highway in Bakersfield stands the last remaining Native American “Muffler Man” (25 feet) in California, and one of only 18 remaining ones nation wide. 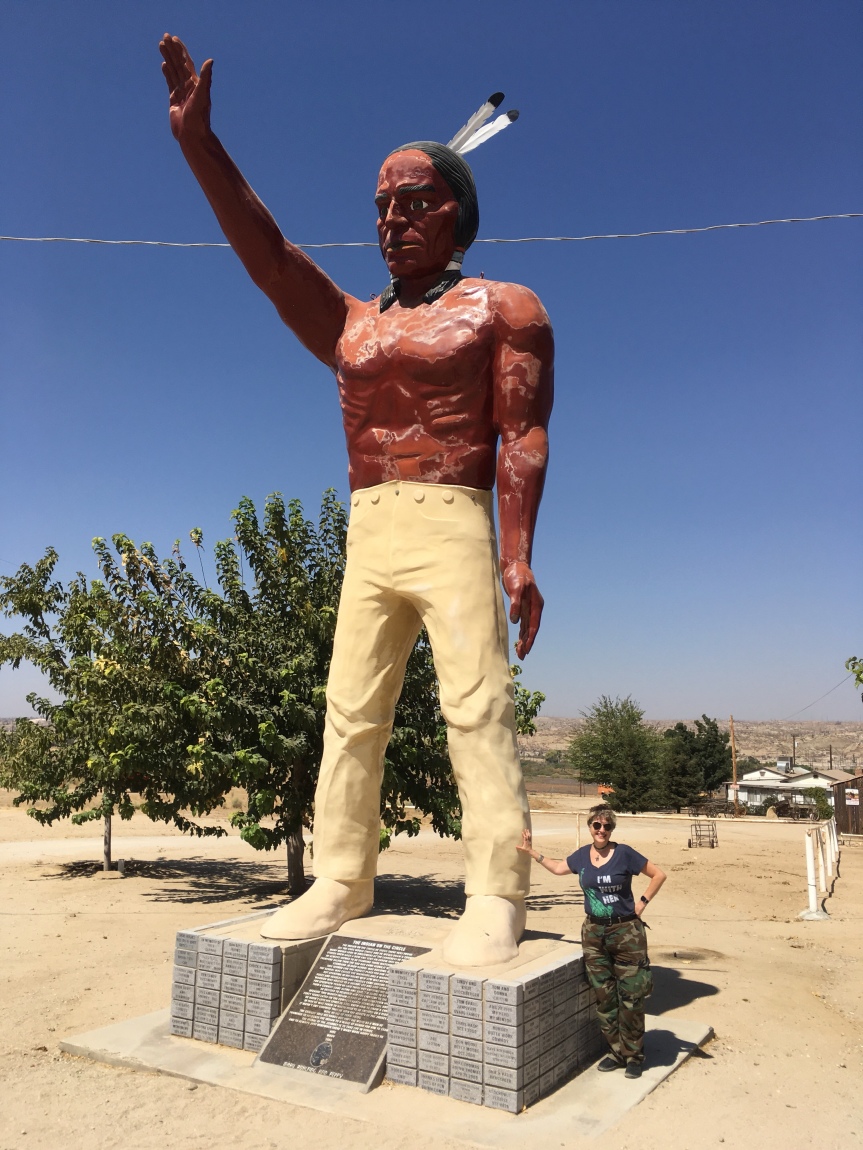 Driving towards this fiberglass “Muffler Man” you’re going to be SURE the directions are wrong, but they’re not. According to Roadside America, it was originally purchased in the 1960’s for $1,400 to bring attention to a tire store, at a time when tire brands tended to have Indian names; the Indian then was moved to in front of the local high school (as confirmed to me by the guy who took my picture while I was there), and then in the late 1980’s moved to this location in front of Ethel’s Old Corral restaurant 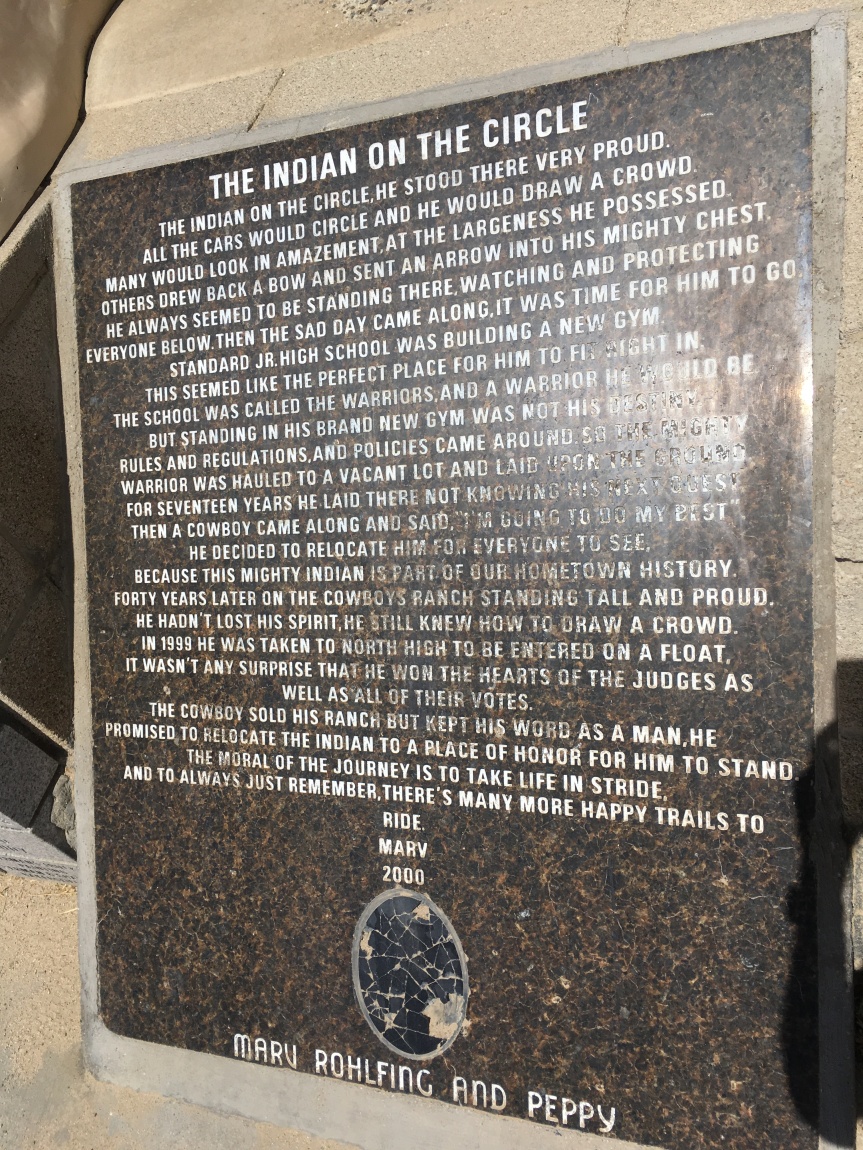 This poem was written AFTER the statute had been moved to its present location… it’s boarder-line impossible to read.

Oh, and not far from this bar, as you heading back to the highway you might pass this view of the Bakersfield’s oil fields

At some point in the future places like this will replace gas stations along major roads. Here, rather than pouring gas into your car, you hang out and wait for your car’s battery to recharge. While I’ve seen individual electric vehicle charging parking spots, and even some sponsored by Tesla…  This was the very first time I saw a Tesla super station. 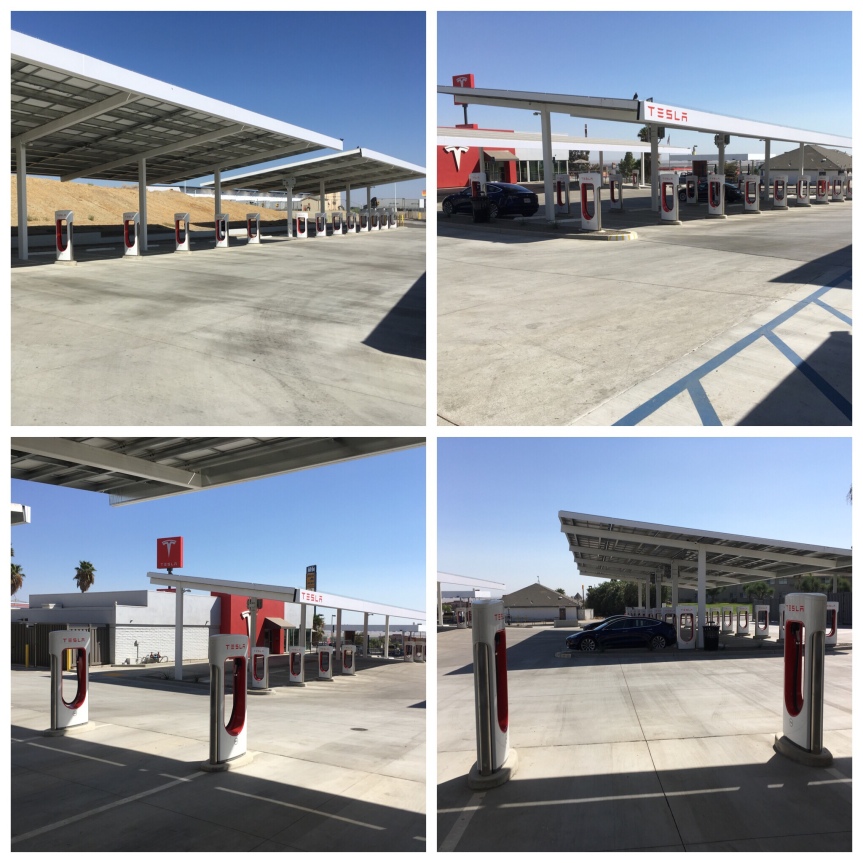 I counted, this location is capable of charging 40 cars simultaneously, and also has two spots dedicated to handicap vans… plus a few window washing things scattered around, should you need to do that.

The “station” also has a waiting area that I couldn’t get inside of because I’m not a Tesla owner (I asked saying I just wanted to take pictures, but they said no), but I could see (through the windows) and they had come complete with a coffee shop, with a staff member working the cappuccino machine, as well as what seemed to be free bottles of water and/or various other drinks plus some snacks, all of which are available to Tesla owners as they wait for their cars to charge

San Francisco really isn’t a steak town. Having grown up in Chicago, which IS, the whole time I was living in SF I kept wondering where a girl had to go to get a decent one (seriously in SF you pay a lot for very little when it comes to steak). That place as it turned out, was — according to all my friends — Harris Ranch, an actual cattle ranch (and the largest one on American’s west coast) about halfway between SF and LA off of California Route 5, that is also a store, a hotel, and a gas station.

The thing that first strikes you any time you drive past Harris Ranch is that it’s something of an oasis in the desert.

The owners really have built something very grand out here in the middle of not very much, and I often wondered what the cost of it was in terms of their water bill.

This is particularly true during the summers when California is traditionally completely dry (seriously, for those who don’t know, it is HIGHLY abnormal for California to get any rain during the summer months), and this is especially true these last few years which have been a growing drought; the greenness of the place really shocks your eyes. 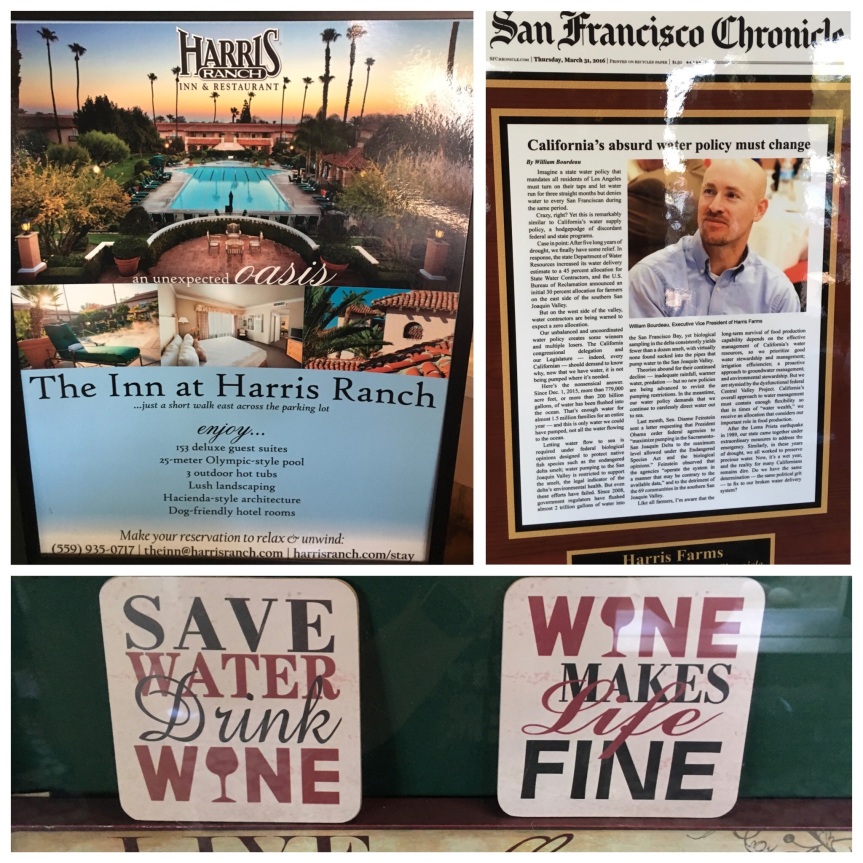 That said, all along the way I kept seeing signs alongside the road saying things like, “is water wasted when it’s used to grow food?” And “This dust bowl courtesy of the federal government.” There’s apparently a political war going on between the conservationists, the farmers with regards to the water issue… but I don’t have the time or energy to delve into it here. (It’s important to remember that while the cities of California vote mostly democratic, the rural farm areas, such as where Harris Ranch is located tend to vote Republican.

That said, Harris Ranch clearly understand who their customer base is…. namely the rich customers who commute between SF and LA, some of whom are willing to put their money where their mouths are in terms of their concern for the environment by buying insanely expensive electric cars.

That said, there’s something new at Harris which wasn’t there last time I visited… a BBQ option at cheaper prices being sold out of the gas station part of the place. 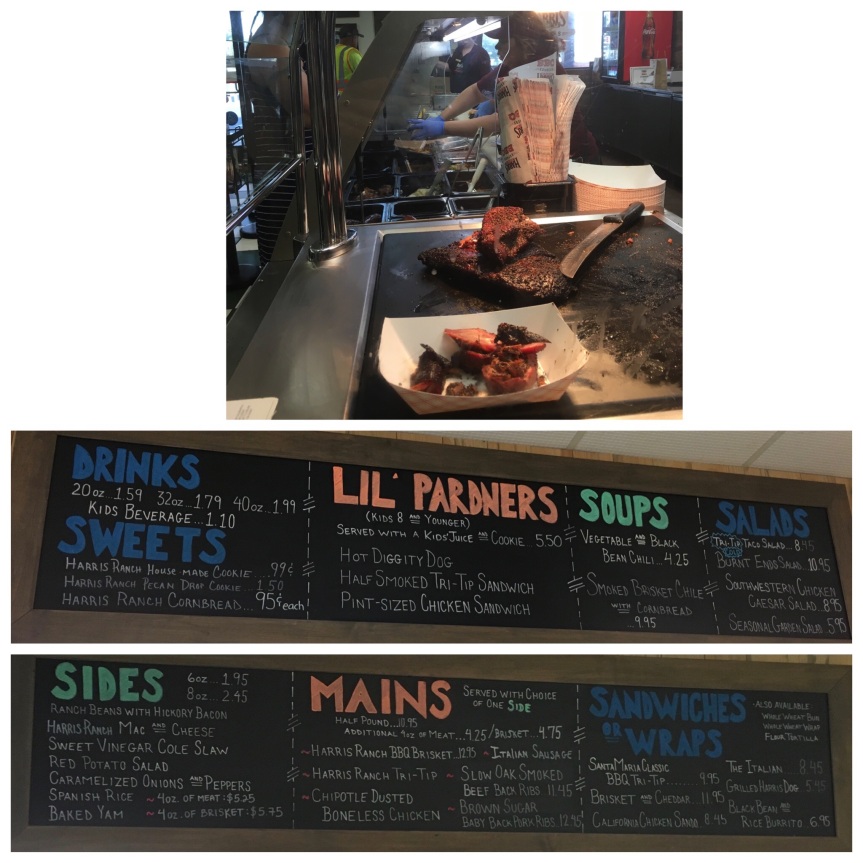 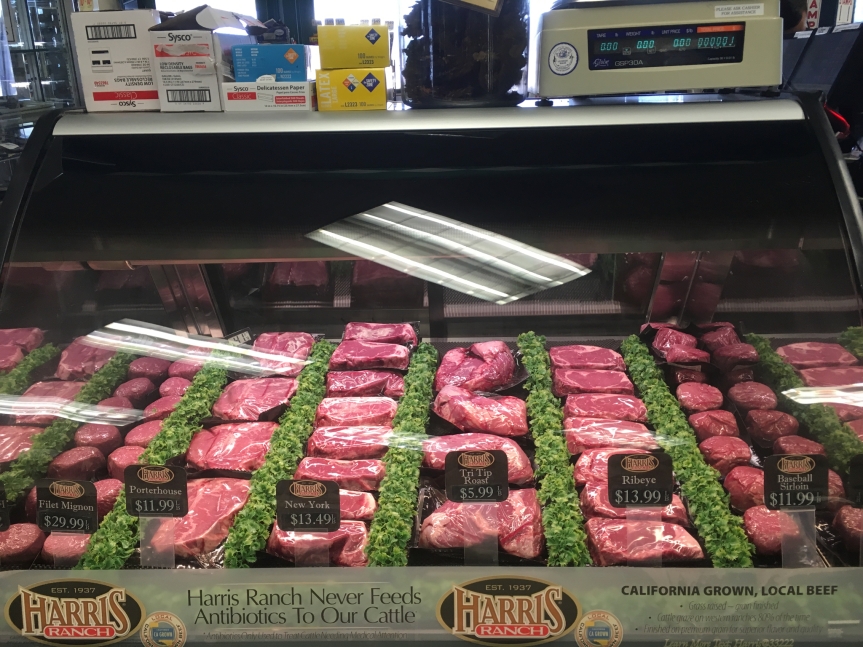 Plus a selection of their steaks to go again, from the gas station’s mini-mart.

If however you go to the main building (a really gorgeous hacienda type building), you’ll find not only a much bigger gift shop, but a butcher shop section in the gift store that’s about twice as big as what’s in the gas station — with more cut options, sausages, etc. 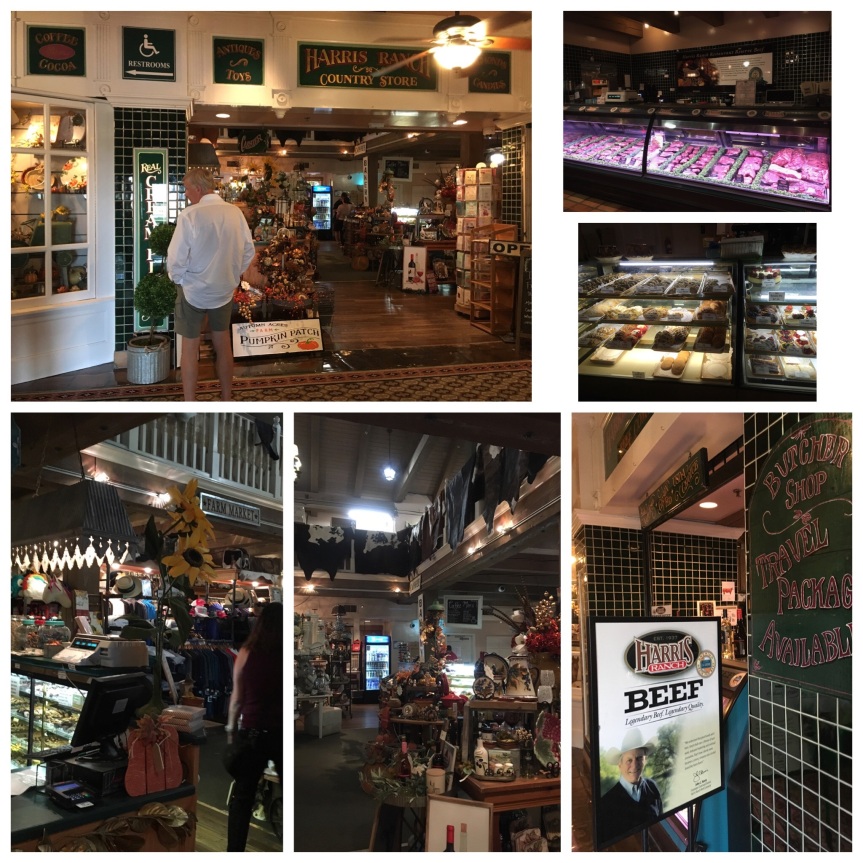 In this building there are also three different restaurants. The first is a bar, which offers up alcohol and slightly cheaper cuts of meat.

The 2nd is a family style restaurant, which is walk in, but again with the slightly cheaper cuts of meat, and a wider menu (to appeal to families) with kids, etc., where you can buy things ‘ala carte‘

And then the third option is their high-end restaurant, which normally requires reservations, has only their best cuts of meat, and the main comes with a selection of sides, a soup, etc. (NOT ala carte).

THIS is where I opted to eat, because in addition to better cuts of meat, which I wasn’t going to eat, it had a wider sea food selection. I got a bowl of gazpacho

For my drink I had their watermelon iced tea, and then for my main I ordered their scallops dish, which is intended to go ON TOP of the steak… and their vegetable platter.

The Soup was very good… and then I waited 45 minutes for my mains to show up. Finally (when my iPhone’s battery was starting to fail) I called over a waiter and asked “how many hours am I going to have to wait for my main dish?” The waitress who had taken my order over heard, ran over, apologized and then told me it was all her fault, she’d forgotten to put the order in. Her manager then came over said they’d have my food out in a jiffy, and that my bill was on them…. SO they screwed up big time, but as the food was free, I can’t complain too much…

That said, I was pretty unimpressed with everything I ate… So Harris, is great for the steaks but seems to have to get its act together otherwise.