While I came to see the Paul Bunyan, and it was OK, it was the unexpected Chippewa Valley collection that I was deeply, deeply, impressed by — ardently so, to the extent that I would argue that if you’re ever within (let’s say) an hour drive of there, it’s definitely worth making a special trip to Eau Claire just to see it. In fact just before leaving — while telling the elderly woman at the front desk how much I loved the place, I learned that their former curator (who was the one who had set the tone) had been ‘stolen’ away from them by the Smithsonian. Yes, it’s THAT good, but on a much smaller budget.

What brought me to the Paul Bunyan Museum was I had remembered seeing a truly massive statue of Paul (and his Blue Ox “Babe”) when I came here with my mother as a child (maybe middle school aged?). Apparently, based on what other people who also came to see the statue as I was waiting for the place to open, that one had fallen apart and been replaced with this much smaller and far less impressive model.

With regards to the hand, I saw a bunch of these sculptures scattered all over Eau Claire. I thought that they were a bit like the Chicago cows — which are much larger, also decorated uniquely and scattered around the city — or something of that sort, and it turned out I was exactly correct.

Initially, I arrived at the Paul Bunyan museum just as it was closing. They let me walk in and look at the gift shop collection, but that was it. As such, I opted to spend the night in Eau Claire and come back the next day before continuing my trip westward.  (I stayed at an Airbnb, a REALLY nice apartment in a high rise with an amazing view; the owner made me home-made quiche and some really good coffee for my breakfast.) The next day, because my host had to go the work, and I was intending to not return to her digs before leaving town, I arrived an hour before the Paul Bunyan was due to open.

As I sat there, I was looking at the sky and saw that there was a slight beige tint to it. It’s not as bad as say the skies in Korea but there was clearly a lot of something between me and the blue. I think Eau Claire Wisconsin is beginning to get the downdraft from that contagion of fires spreading all over southern Canada that were why I opted to take Interstate 94 across till I got to Glacier National Park, rather than going straight north and taking the Trans-Canada highway all the way to Vancouver Island, where I plan to spend to months.

The Paul Bunyan museum to be honest struck me as something of a tourist trap-ish… the employees were for the most part a bunch of spoiled teenagers who are paid to essentially sit there and do nothing (LOUSY customer service). When I went there was in fact this one blonde girl who is clearly the bully/leader who was doing her best to avoid actually working, and expected the other employees to stay with her so she could laud it over them. When I finally demanded help, she send over this other girl, a kind of passive and sweet brunette to see what the problem was. It was a rather small museum and most of what was in there in terms of interactive displays didn’t even work.

To be honest the best part of the Paul Bunyan is what I refer to as the “living Museum” part out back — a collection buildings representing a logging camp; and… I saw many locals go STRAIGHT to these, bypassing the completely the building where you pay your entrance fee… and like I said before, all the teenagers on staff were just sitting in there not doing their jobs — which would have included stopping people from entering without paying.

As you continue back through the buildings you pass through a wooden gate and come to more houses, only these are no longer the logging camp and look more like part of what might have been early Eau Claire, WI, marking the transition to the Chippewa Valley Museum, in the large post office type looking building in front of you (no pic, sorry). 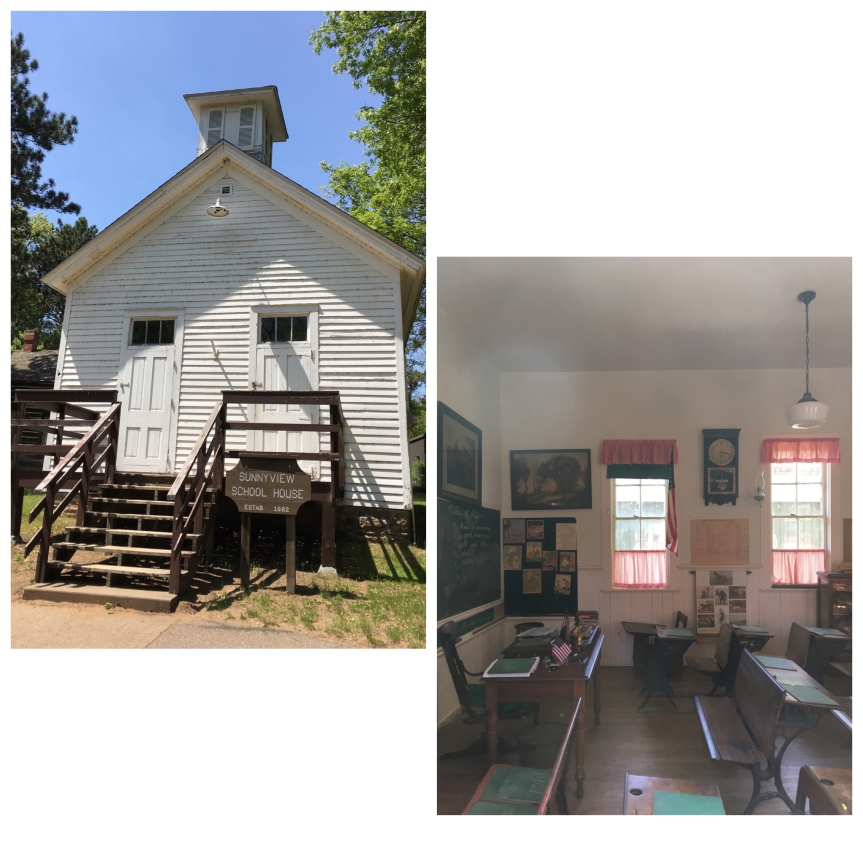 Even though the two museums, the Paul Bunyan and The Chippewa Valley, are located right next to each other within a park area (surrounded by a sort of moat — see map below) they are not in fact cooperative with each other — you can not even get a discounted combo ticket for both — because they are their owned by two different groups.

The price is the same for both places seven dollars each, but this place which is the non-for profit devoted to the overall history of the area, not just logging, actually has a much better display in my opinion. Rather than having to hit a button, the who place is automated with movement activated ‘background noises’ to give each area a feeling of veracity. So for instance, in the section about how the Eau Claire area used to be devoted to logging and wood industry, as you enter you hear the manager of the woodworkers talking to them about doing their jobs or when you walk into a section that supposed to be a schoolroom children saying the Pledge of Allegiance, that’s what you hear. 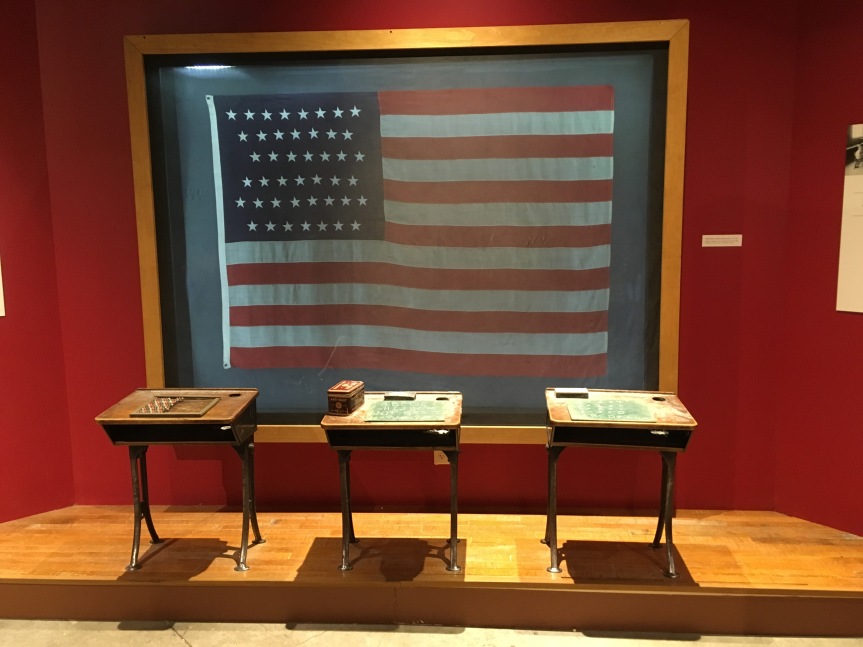 They also have really taken a good advantage of the video game architecture as a way for people to be able to go back in time and experience various things. … So for instance, fir you walk into an area devoted to the original Native American tribes the lived in the area

and in the trading post you can actually in a video game (built by local students) sort of manner interact with the trader. You are a Native American of the region and your language shifts between English and your native language is you negotiate with the trader and socialize.

Perrault’s Trading Post Game from Alex Bostone on Vimeo.
(The actual interaction between you and the trader begins 1 minute into the video) 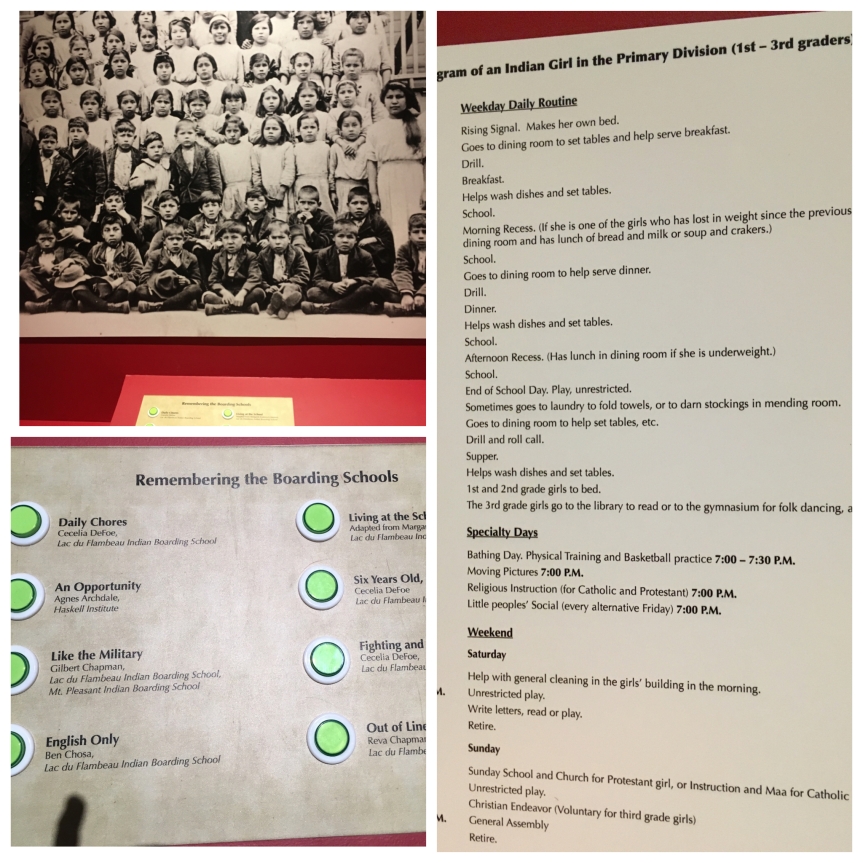 This is followed by a fairly devastating area devoted to the cultural havoc wrought on the tribes when they children were forced into boarding schools where they were forcibly ‘converted’ to meet the cultural norms of the dominate white population. This included a selection of interviews with Elderly tribal members recounting their own memories of the place, and of the abuses.

And then the presentation moved into modern times…

Then they talk about problematic things, like the resettling of the Hmong refugees in the area and the problems they had when they came to settle,

And the functional icecream parlor where you can get a snack

All in all this was probably one of the best local history museums I’ve ever seen; while there I talked to a local who said as he was walking through one of the sections devoted to what life was like between the late 1800’s and around 1960, also broken down into subject categories (jobs, health, technologies, etc)… as he went through he was reading all of these quotes, and noting to me that they were from locals he knew—  and he’s lived here all his life — so whoever organized the exhibitions clearly had anthropologists and historians going through the community and collecting the local stories and supporting objects from the area in order to re-created the experiences….. and they skipped nothing, the good, the bad, and the ugly… it’s all in there….civil strife, strikes, economic upheavals, it’s all in there …. I am deeply impressed