After my post about Ole’s Big Game Steakhouse in Paxton, Nebraska, off of I-80, one of my friends on Facebook said that if was doing Route 66 on my return trip, I should check out the Road Kill Cafe and bar in Seligman, Arizona, that I’d love it. But I’m afraid that after Ole’s it was HIGHLY unimpressive.

Located half way (1 hour in either direction) between the larger towns of Kingman and Flagstaff, Seligman Arizona takes its place on route 66 VERY seriously… it sort of has to, it’s really got not much else going for it. (even if you needed gas, odd are you filled up Kingman or Flagstaff). It’s initial claim to fame was as a stop on Beale’s Wagon Road, a trade route from Fort Smith, Arkansas to Los Angeles, California … and then as a stage-coach stop. When the railroads replaced the stage coaches, it was lucky enough to be chosen to be a railroad town, complete with a Harvey House (closed in 1955, demolished 2008), but in 1984 passenger trains discontinued service to the town entirely, and now just pass it by. Cars don’t really stop there much either, as while it had been on route 66 (obviously), when I-40 came through in 1978, it by-passed the town by a few miles — and like I said, most I-40 travelers are far more likely to pit stop at Flagstaff or Kingman, than they are Seligman. As such, all traffic in the town virtually disappeared on that day, according to Angel Delgadillo, a local businessman. To its credit however (you’ve got to work with what you’ve got) the town earned itself the name of “Birthplace of Historic Route 66” ten years later, when through their successful lobbying efforts they managed to convince the State of Arizona to make 66 a “Historic Highway” — and hence spend money on creating the signs that line the 66, and the big printed out 66 symbols in the middle of it. 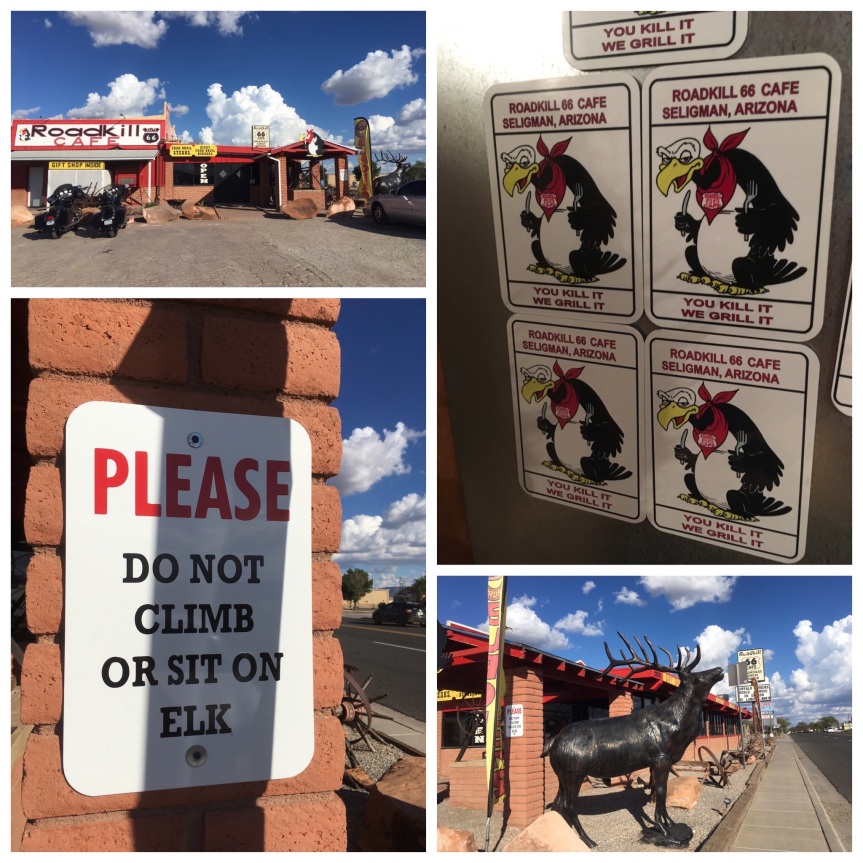 From the outside, the Roadkill Cafe (above) is way more about shtick than Ole’s was.

While on the inside, the road kill cafe (above) comes in a sad second to the festival of death that could be found in Ole’s (below)…  because Pretty much everything in the photos from Road Kill is in the gift store section of the restaurant, with the eating area looking just like your average diner — it was SO mundane looking that I didn’t even bother to photograph it …. while at Ole’s there’s way more of it and it is in every spare nook and cranny the restaurant had to offer