Both my travel buddy AND the friend I stayed with in Ballarat… told me that they wanted to bring me to Phillip Island. It’s about a day trip from Melbourne and (as this desire on their part evidenced) is most definitely a must see on while in this part of Australia. While both of them wanted to bring me here to see the penguins (see my post), my travel buddy and I got there early enough, that we had time to kill, so that we decided to go to the Koala Conservation Centre 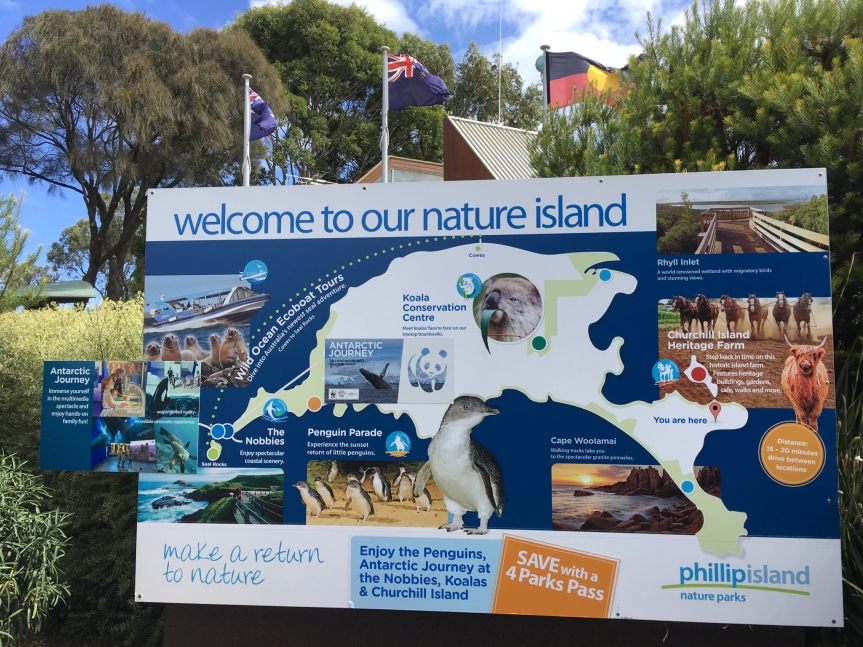 [NOTE: That said, I’m writing this blog post well AFTER my visit. In spite of the fact that I was in Phillip Island on Feb. 25, 2018 a whole month after my accident that had resulted in a sever concussion, I still wasn’t mentally able to keep up with my write ups … At the time an outing like this one left me exhausted and the next day was spent just resting. At the time, if you’d seen me, you’d realize very quickly that something was off… my speech was MUCH MUCH slower, so that I was searching for almost every word (which was very weird and a bit frightening)… as such I was still in a very passive space mentally, and as such I couldn’t write about it then, and I just haven’t gotten around to writing about it till now.  The accident made it impossible to focus my brain the way I needed to in order to blog, and as such I fell woefully behind on the posts the Australia trip … but as I’m currently holed up in the Chicago area (i.e., my home base) doing things like doctor’s visits — including some related to the post concussive syndrome which I am STILL suffering from (albeit very mildly at this point, thankfully) and the fact that I hit the ground so hard that I dislocated my jaw (requiring some expensive visits to my dentist who is trying to fix the damage) —  I am taking the opportunity of being back on my home turf to rectify that lapse.]

My travel partner (Mik) and I have ONE major disconnect in our our travel preferences, I try to avoid extreme heat at all costs while he LOVES it; and he considers temps that most people qualify as in the mild to comfortable ranges, freezing. Doing our long-planned day trip to this island, Australia’s weather took a dip from “Oh my G-d it’s hot” to 66 F (18.9 C) which he considered FREEZING and I consider about perfect for dressing spiffy (a t-shirt, a light leather blazer and jazzy hat). (If you note the pictures, he ends up NOT wearing his jacket even though he kvetched about the cold… Men!)

Anyway, we bought our tickets for the penguin march later that night (cause they sell out), and headed to the Koala Center 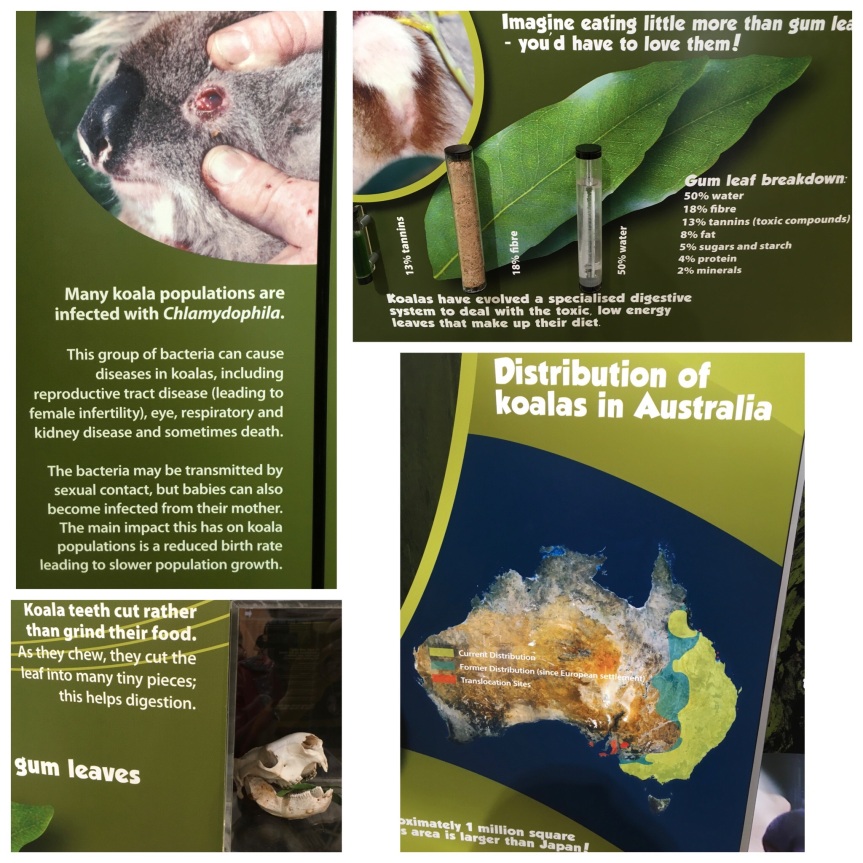 When you first arrive at the center there’s a big educational section where you can read up on all sorts of things you didn’t know about Koalas, such as the fact that they are going extinct because of a fast-moving strain of Chlamydia which is causing infertility and blindness (since my visit, there’s actually been some progress with private funding in sequencing their DNA, which they hope will lead to a cure before one of the cutest animals on the planet goes extinct)

Once you’ve cleared the educational bit, you walk into a two bits of protected habitat, where the Koala’s are essentially caged-in (partially to keep them in but also to keep other Koala’s infected with Chlamydia out) into a sufficient amount of habitat to keep them happy — with supplemental foods dropped off in areas close to but just out of reach of the guests.

Then you walk up along elevated (but handicapped accessible) boardwalks that bring you up to the level of the branches where the Koala’s like to hang out. So you can get close, but not too close.

Here’s a video I took of an active Koala (most of them tend to be sleeping, or just lazily hanging out.

This old guy (the staff member told us it was an elderly male), in spite of the best attempts of the staff to keep it from happening, had somehow managed to get from the tree to the ledge of the visitors section of the boardwalk. The guy in the light shirt standing next to Mik was in fact a staff member, who was blocking visitors from getting too close. He told us they had placed a tree limb across from the boardwalk to a tree, and he was just standing there waiting for the Koala to get the hint and cross back to the tree, so that he could remove it.