This travel stop was in my opinion a complete let down to the point of being annoyed that it took up so much of my time for that day (So what comes next is a very long RANT). The Tippecanoe Battlefield Museum has got to be one of the worst local community sponsored museums I’ve seen, especially when compared to all of the sites that I’ve been to that focus even peripherally on Native American history. But that said, it had hands down the BEST gift store (priorities, clearly). This place is in DIRE need of a skilled curator… it’s clear they had brought one in for the “white people” stuff, but the Native American areas are a pathetic and almost insulting joke. The focus here is almost entirely on what the Federal government did, including the blow by blows of the battle. [This is probably because the U.S. military officer in charge was the local Indiana boy William Harrison, whose success, in said battle, helped him to go on to become our 9th President — a presidency that only lasted for 31 days before he died of pneumonia making his the SHORTEST term in office]….

One of the annoying things about this site was, at least with regards to the Native American’s side of the story, you didn’t really learn anything on the inside of the museum (after paying your entry fee) that you hadn’t already learned while reading what was presented on the OUTSIDE of the building from the various signs and plaques.

Adjacent to the museum is this park with a massive monument dedicated to the American Forces, with a uber masculine/sexy statue of what I’m assuming is Harrison, who as I said went on to become our 9th President, in large part because of this battle. (which tells you something of its political relevance in the day). Please note the:
LOSS, Americas Killed 37, wounded 151…. Indian loss unknown …

And then these small off to the side plaques, added in 1996 — about the forced removal of the Potawatomi Native populations in the area, called the Trail of Death that happened to the in Sept – Nov. of 1838… a 660 mile forced march during which many children died.

[An important note which I did NOT see explained ANYWHERE in the museum (DID I MENTION that the museum sucks?) is that, the Potawatomi were the tribes that were traditionally a settled/farming tribe that lived on this land, while the Shawnee Indians — the ones involved in the battle — were actually a semi-migratory nation whose lands overlapped Potawatomi land in Indiana and Illinois (in low numbers), but who had MOSTLY lived in lands that extended EAST as far as Maryland. As such, they had already been pushed off those lands by American settlers, and were regrouping and building permanent settlements in Indiana (Indian land anyone?) before the battle happened (which probably didn’t make the Potawatomi very happy)]

Once I paid to go inside it become incredibly obvious to me that most of the focus of the museum is firmly on the white people, with the Native Americans only really given lip service as an after thought… to be honest, I didn’t really read the poster (below) that blocks your entrance into the place like a warning sign until AFTER I had left the place… and was paying closer attention to the photos I had taken.

This attempt at an apology, which as I said was located JUST at the entrance, in the middle of the path, STRONGLY suggests to me that I’m not (by a long shot) the first person to notice this…  “Originally preserved as a tribute to the soldiers who fell here. We recognize today the bravery of both the Native American and United States military forces who died here defending their way of life.” So, what they have there was about the Native Americans is almost a “lip service” nod to them, and is presented in the most boring, cost-effective ways possible, so the likelihood of customers ‘taking it in’ was unlikely. 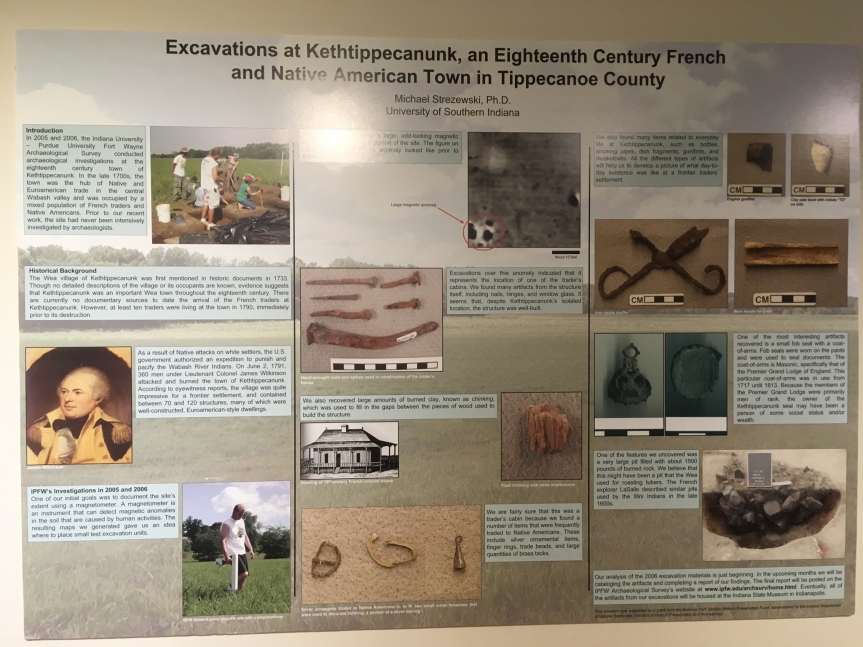 So, even though you’ve walked into a museum that is supposed to be focused on the battle, the first section is devoted to the lesser findings of local archeological digs about a a village where the French and the Miami Indians were living together peacefully… which is more than a bit confusing, largely because it’s not properly segregated nor introduced (to that point, the fact that it was Miami AND French was something I figured out later as I put the disparate pieces from the various signs together — really it was NOT clear). I’m guessing the good stuff went to bigger museums or the University’s museum.) That said, what was presented was a bit scattered and a bit hard to make sense of….

There was VERY little reference to the French traders nor any mention how well they integrated themselves into the local populations, other than by reference (they lived were living side by side)… so NO comments anywhere about how the Native Americans were never threatened by them, and how their presence was almost diametrically opposed to that of the American settlers…. just these few items

and then there is an equally tiny a bit about the later American white settlers who lived in the area other than that they were there (with some bit and pieces of archeological evidence of their lives… ). Again, NO mention or explanation about how they were invaders, from the local populations’ points of view: i.e., the settlers were forcing Native Americans off their ancestral lands, destroying their hunting grounds and converting them to farms.  And again, there’s no discussion of how those white settlers got there or why… nor of the Louisiana Purchase of 1803, etc. (I did spot some reference to the Founding Fathers buying land in the area, but it didn’t come with any explanation of how those land speculations — and the fact that the British said, “sorry no, that land belongs to the French so no you can’t claim ownership of it.” Nor was there any good explanation of how this land greed was something that most historians at this point recognize as being part of what motivated the decision to break from Mother England; all I spotted was a one sentence reference to it which most people would likely miss as it wouldn’t make sense to them.

There are a few scattered references to the settlers’ presence being partially responsible for The American, War of 1812, with Britain, (which from the British point of view was a minor theater of what historians argue was actually the first World War) that happened during the same time period as this battle… but very little explanation of what that connection was….

The Native Americans involved in the Tippecanoe battle receive barely enough focus on the Shawnee Indians to make any sense of the motivations of Tecumseh (one of the most famous Native American tribal leaders EVER, whose name is probably better known than Harrison’s) and his brother Tenskwatawa (other wise known as ‘The Prophet”)… that, and their offerings were so badly displayed as to border on nonsensical (it was just stuff, it didn’t tell any sort of story). 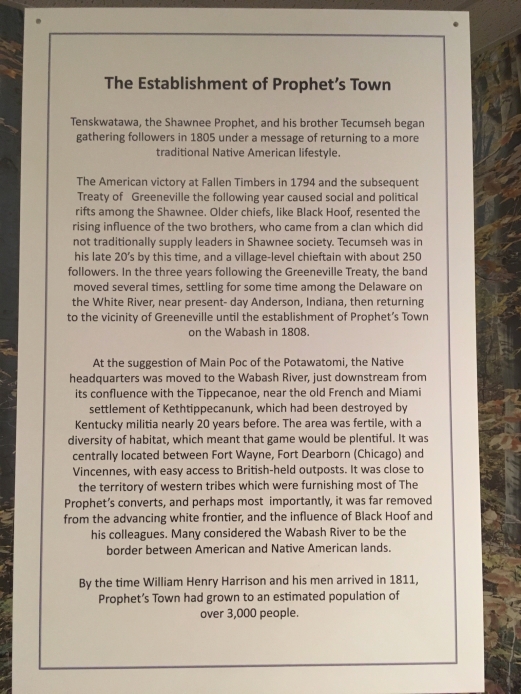 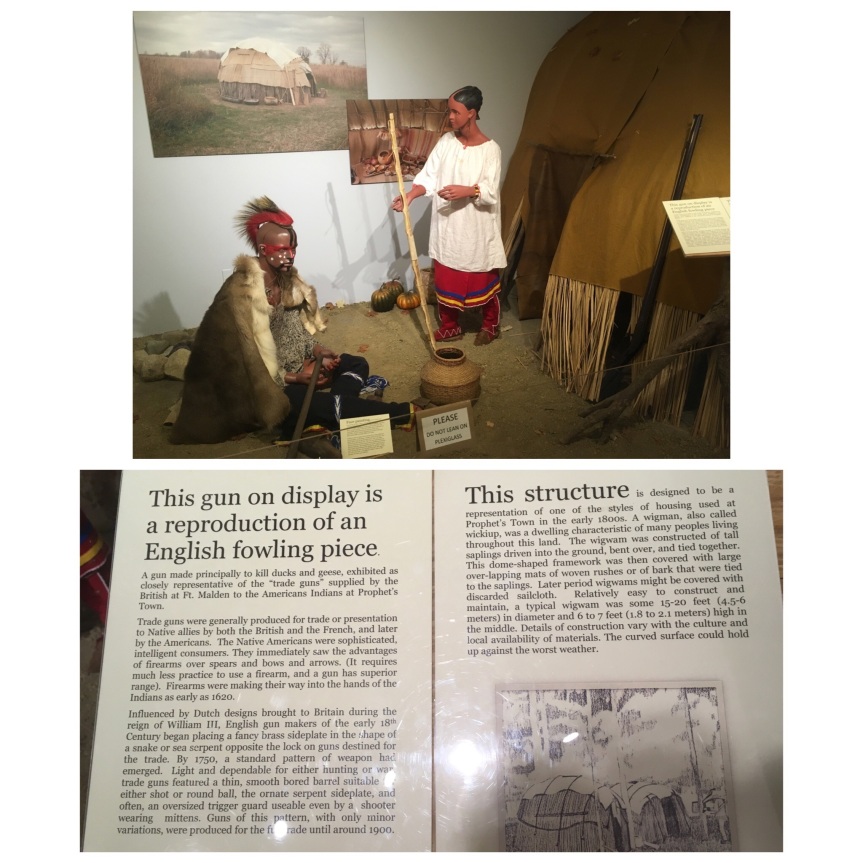 Also, if you DO actually stop and read what’s written on the various posters (make sure you read the one above first) it’s repetitive, and the time lines of the thing are confusing. It’s almost as though they copy and pasted things they found on-line or in books into the various posters scattered almost thoughtlessly on the walls

Then, you come to what this museum was CLEARLY intended to be focused upon when first created; it is the section where — by far — most of the money was spent, and actually looks like a serious museum rather than a slap dash attempt at one. This section is a glorification of the American soldiers who arrived for the sole purpose of breaking up any last hope attempt on the part of the Native populations of the area to live peacefully.

Right after this is a multi-media sound and light show devoted to giving you an intricate blow-by-blow of the battle. 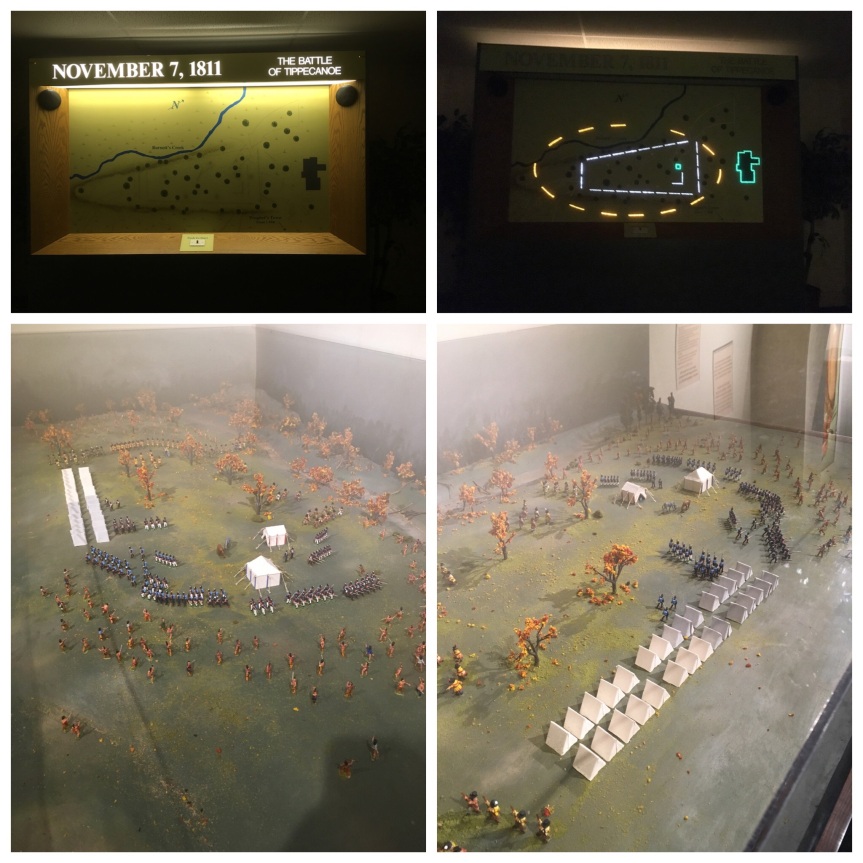 It reminded me of a much smaller, and more affordable version of the Battles for Chattanooga presentation in Tennessee that I love so much that I’ve gone there three times in the last 10 years. 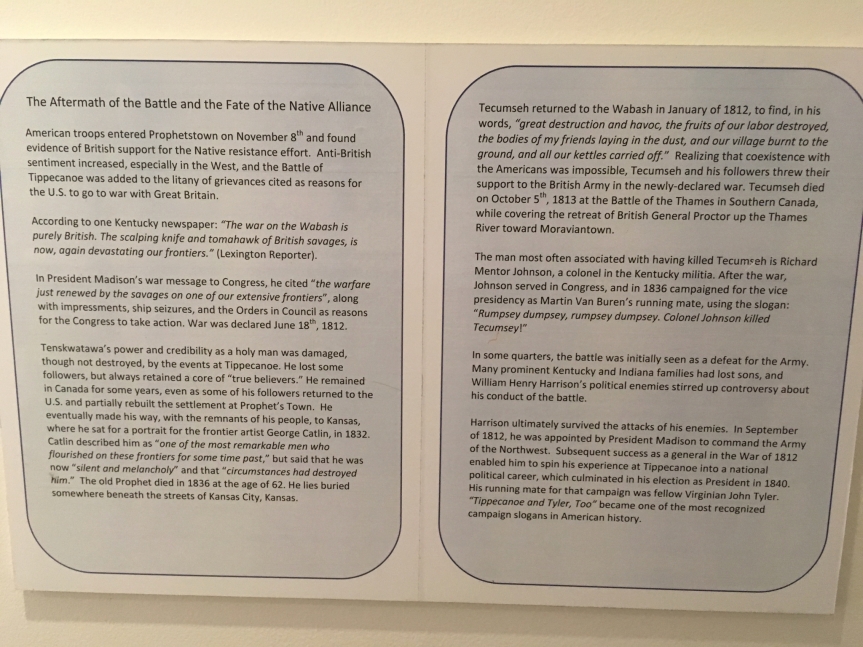 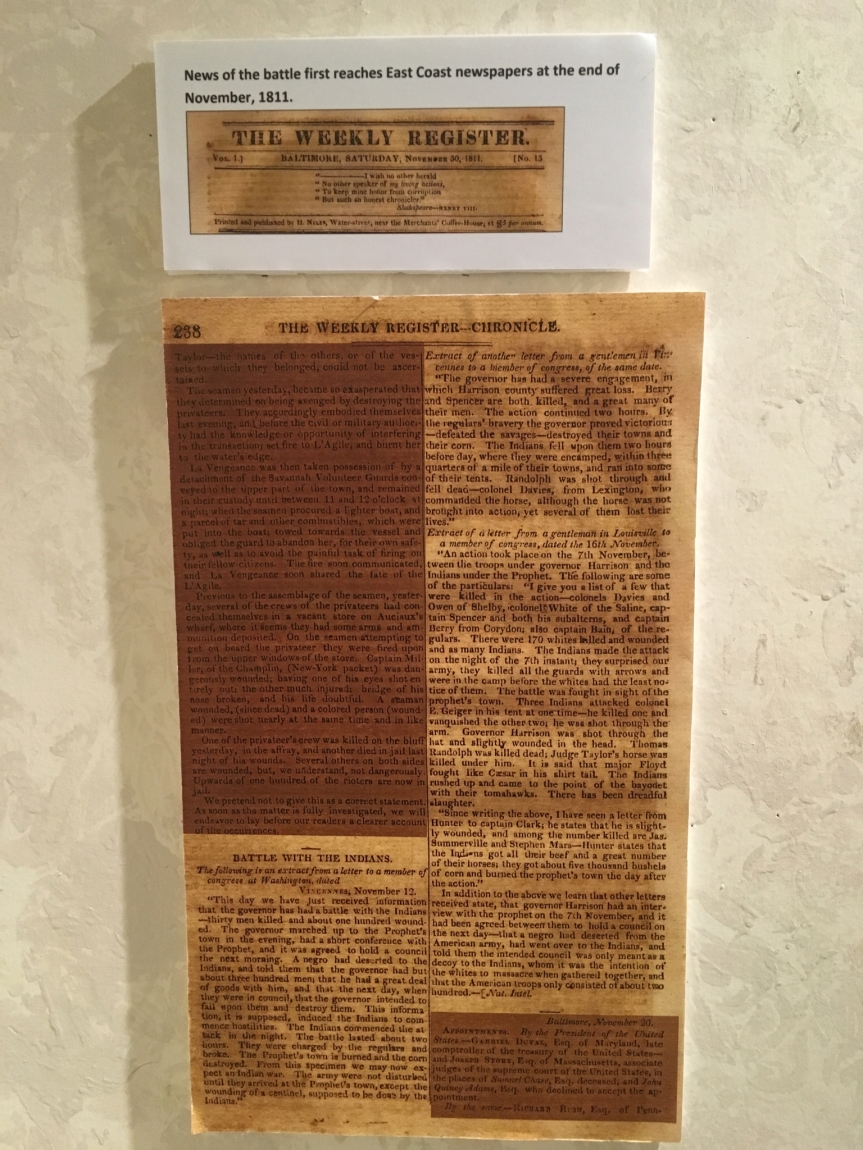 After these few pieces of paper stuck to walls, the exhibit returns to its true love of the U.S. Military and Harrison 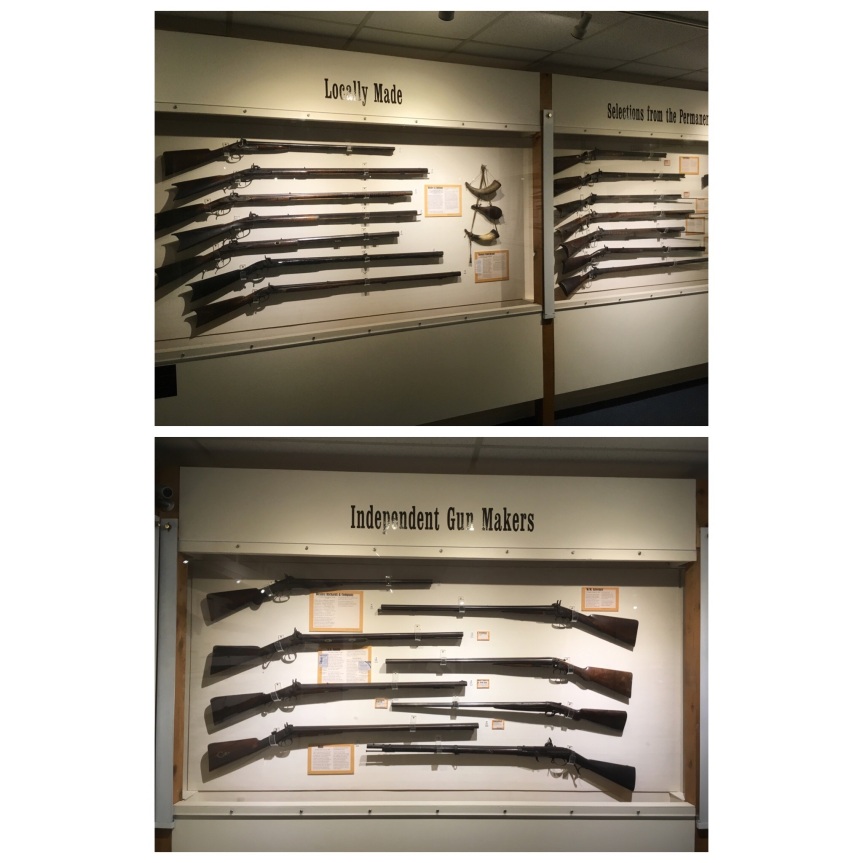 As I was leaving the place, the ONE thing the woman running it insisted on leaving her desk to point out to me was the fact that Harrison’s campaign for President was what we today might consider a “modern” one, in that it utilized slogans “Tippecanoe and Tyler Too!” and the media in order to make Harrison popular and promote his candidacy 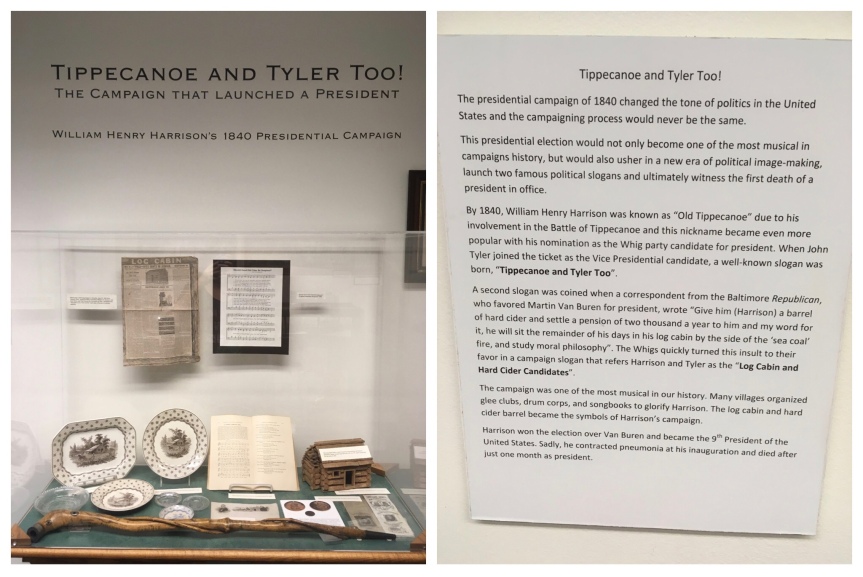 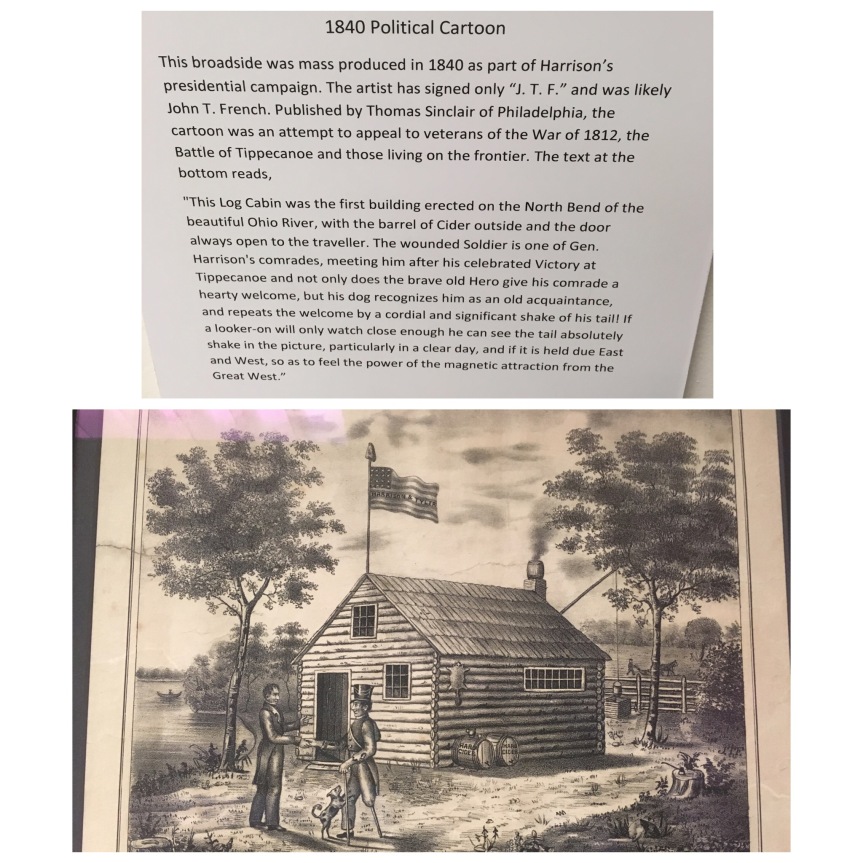 But, let’s talk about the gift store….

… IF you’re searching for a decent source for historic clothing to wear to a historical reenactment of circa 1811, this is the place… 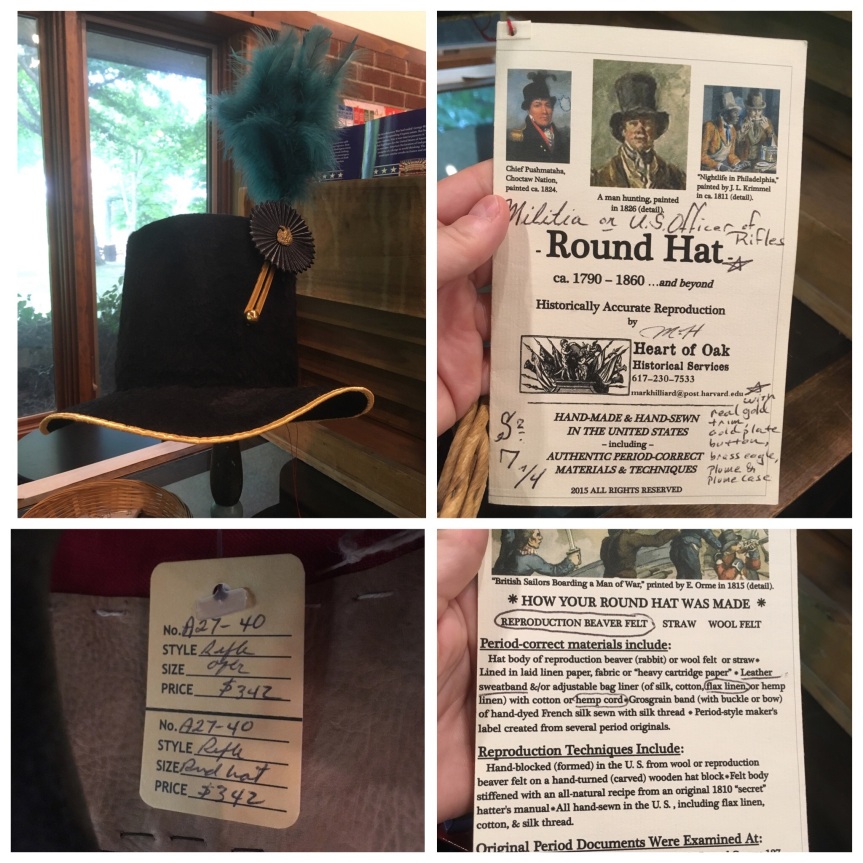 Hand made, historically correct round hats selling for $342 are not the sort of items you normally see for sale in local museum gift stores!  While there were some items, cheap knickknacks that are more normal for these sorts of gift stores, the MAJORITY of items this place was selling seemed to be AS focused on historic reenactment. They weren’t selling little rubber Tomahawks for kids, they were selling REAL ones, and historically correct hand-made leather bags, pipes, and either the clothing, or the pattens so you could make them yourself…  as in exactly the sorts of goods for sale (but for a different time period) as what I found at the store of the  SCA Pennsic event I went to last year — which is a medieval reenactment

APPARENTLY, this is because there are TWO reenactments that happen in the area devoted to this period of history (below is just one of them), one devoted to the pre-revolutionary war period, and one to the Tippecanoe battle.