Even if you only have time for a quick drive through on your way to somewhere else via Canada’s Highway 1 (like I did), it is TOTALLY worth it to pitstop at Banff National Park’s Gondola for a ride up the mountain ($42 for adults, $21 for kids); 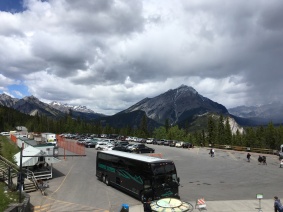 Every time I told anyone what my plans were for this summer, the one thing I heard almost everyone say was, “well of course you HAVE to stop in Banff” and now I know why. Banff is a cute, very touristy little town located in the middle of a national park, of the same name and just to the side of Canada’s Highway 1. It is, in a word, gorgeous. I was there in the last week of May, in a winter so warm and dry that Canada was having wild fires, and the mountains were still snow peaked. 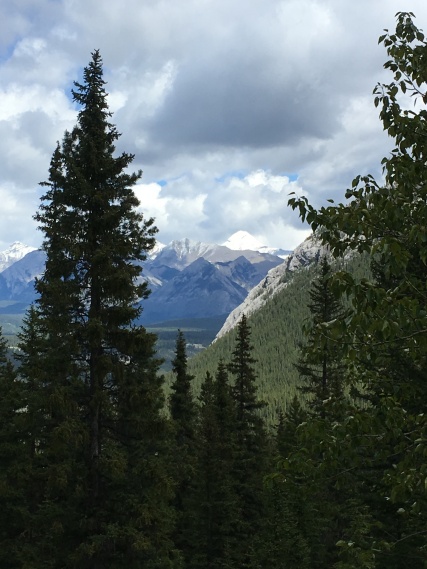 From the town to where the Gondola is, is about a stunning 10 minute, very well marked drive (even without my GPS I would have found it. Once there, If you want to get to the top of the mountain you can of course, always hike up it, like these folks are doing…. 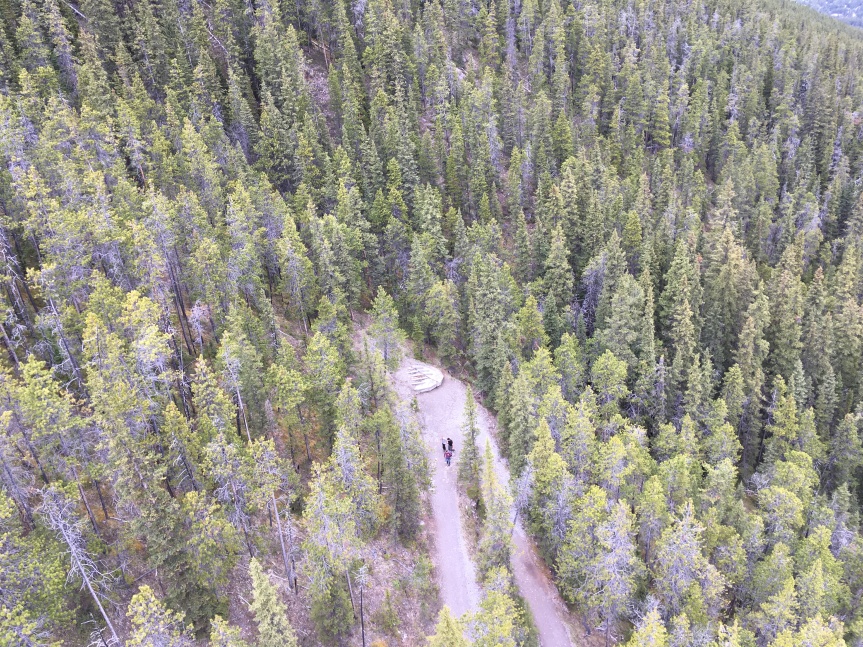 Or you can pay what initially seems like a hefty $42/adult to take the Gondola, a choice I did not regret once I was in it — they allowed me to ride alone.

When you get to the top (which is not really handicapped accessible) there is a wooden walkway with strong railings that extends all the way to next peak (with a lot of up and down staircases along the way), which I did not take; in part because I’m a wuss, but also because I knew I had a good six hours of driving ahead of me and it would not be safe to exhaust myself (no really, it isn’t just an excuse). If you do choose to do it, you need not worry about doing it alone, I would argue that MOST of the folks opted to do the full hike. 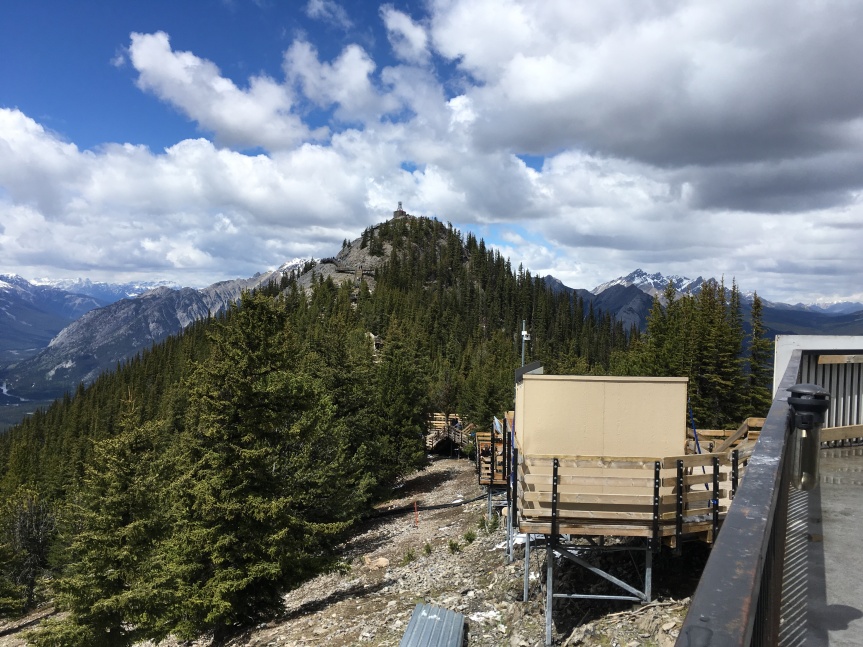 I however choose to just hang out near the arrival building. When I was there it was under construction, but usually it contains a restaurant, bathrooms, a gift shop, etc. While we didn’t see much wildlife up there, there was some: 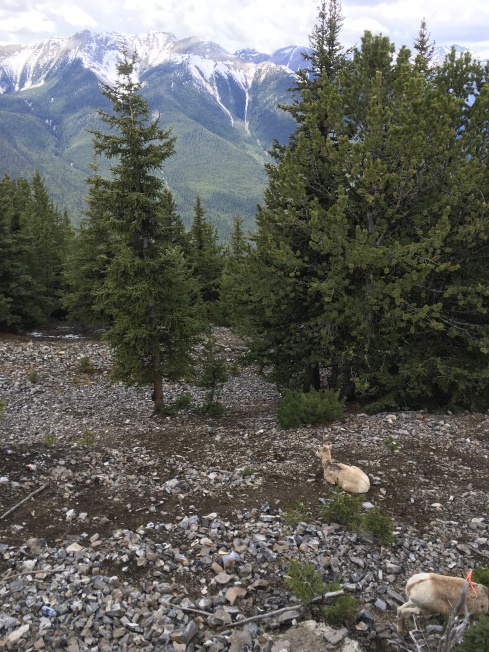 There was this one very ballsy chipmunk, he came right up to one woman who was sitting on a bench and sat next to her, then she saw him and freaked — then he kept approaching folks hoping for food — And then there were mountain goats who seemed to prefer to hang out under the walkway, which I assume provided them some protection from predators who didn’t like the sound and smells of all the humans. 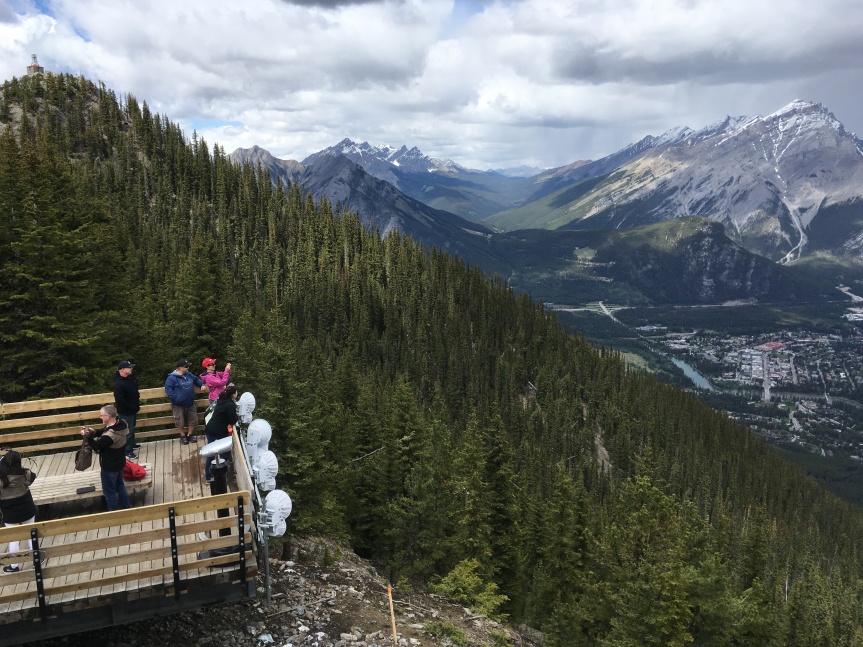 Then, when you’re ready to go down they take a picture of you as you renter the gondola, which they then try to sell you a print of (they aren’t able sell the digital image) photoshopped really badly into a cheesy looking background.

I will say this, apparently I came at the right time, because there was no line at all, either when I bought my ticket, or decided to finally take the ride up (after a bathroom break and checking out the gift store, etc.); however, when I got to the bottom, this is what I saw:

and it kept going all the way down the hallway.

That said, I think it’s important to try to time around bus tours. When I first got there I saw three large tour busses loading up and heading away, and then I think all of these guys were dropped off while I was coming down. Don’t wait in a line like this, have a cup of coffee, troll the gift shop, and wait for it to shrink.