Worth a visit if you’re in the area, having the advantage of the natural beauty of the surrounding mountains. Shows for the adults, and roller coasters for the kids. If you go on a weekday off season you’ll almost never have to wait in a line.

Did I mention I’ve been to ALL the DisneyParks, some than once? I can’t do roller coasters, I have benign positional vertigo which means any ride that relies on centrifugal forces is a really bad idea for me. In Hong Kong’s Ocean Park I went on one of those water rides where the boat slowly spins and bounces through the water channel … I was nauseated for the next four hours — those rides for little kids where it’s swings attached to a central poll and all it does it rotate slowly? Ditto. So, while Dollywood has rollercoasters (a few) those are not why I love amusement parks.

I got to the park on a VERY low attendance day. I’m not sure how many parking lots the place has (they seem to wrap around a hill), but I arrived at noon only to find a parking spot in the 3rd lot (C for Candy Cane), and as I rode the tram to the main gate I spotted both of the other lots with cars were still about 80% empty. Parking is not organized and directed the way they do it at Disney World, where if you forgot where you parked your car but can tell them about what time you arrived, they can tell you EXACTLY where you are parked (assuming you parked where they told you to). Here you pay for your parking, pass through the gate, and then it’s catch as catch can, and most people seem to come in looking for spots close to the tram stop and just ignore the rest of the lot, moving on to the next one once they feel they’ll have to walk to far — insanely disorganized. (This would be like Disney patrons only parking in about the first 20 spots in a row and moving to the next row up).

The gods however were with me upon my arrival. I got to the front gate to buy a ticket to spot a woman who looked like she worked there standing by the ticket counter with a man along side her:
“why you here Hun”
“I need to buy a ticket…”
The guy standing next to her said “honey it’s your lucky day, I have been standing here for a 1/2 hour trying to give away this extra ticket.”
It seems season card holders are given some extra tickets for friends and this ticket was about to expire (or some such). Rather than just toss it he decided to be charitable and give it to a stranger, only everyone but me had already purchased their tickets before arriving.
This free ticket turned out to be a double good thing, as about three hours in massive storms kicked up which resulted in most of the rides, and such, shutting down because of lightning. 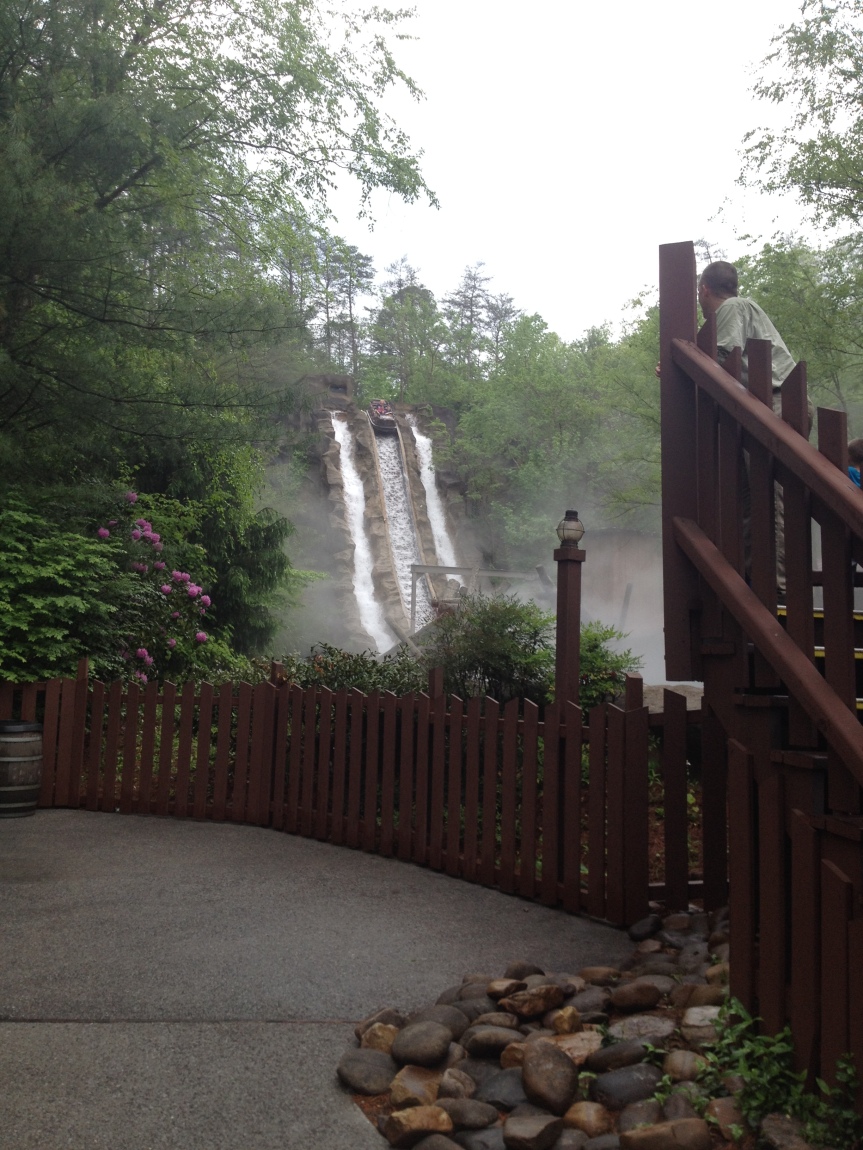 Even though Dollywood advertises itself as good for people who get dizzy, I did not find this to be the case. In the whole park there were only two rides that were not bad for me were the Dollywood Express Train ride (with a genuine old antique soot and smoke producing steam engine), and a ferris wheel (which I didn’t bother riding). But I whole heartedly suggest the train, beats the heck out of the Disney Train which takes you through and around the park as well as into the surrounding woods. 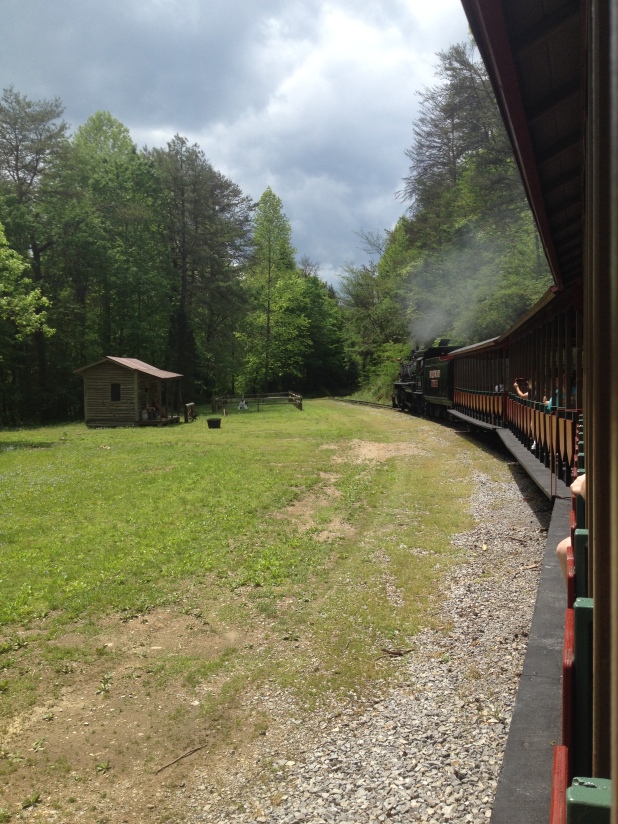 Other than that, Dollywood is about the performances. Now you’d think she’d have her pick of talented but unsuccessful country artists of various genres, but I found the three performances I heard to be beyond underwhelming.

That said, wifi at the park SUCKS, there was no 4g… Nothing!! There was supposed to be free Wifi which I connected to at the front gate, but no connection. I wasted a good half hour trying to find connectivity that lasted for more than a minute near the front gate area and finally gave up… I did however finally find some inside one of the restaurants towards the back of the park, Miss Lillian’s Chicken Shack.

Food at the park is kind of bizarre. You can spend $10 to $12 on a single sandwich, or for $14.95 you can have an all you can eat buffet… Miss Lillian’s included four kinds of salads, smoked or fried chicken, smoked turkey legs, and chicken fried steak, and all you can eat of four kinds of desserts (I had the banana pudding). It was all sort of cheap quality stuff, for $14.95 it was a deal. And there is a a lady walking around the place who looks like she was a rip off of Minnie Pearl’s character from the TV show, “Hee Haw” (it was on US TV from 1969 — 1992) annoying the customers and playing a bit of banjo. I strongly suggest passing the food stalls and opting for the sit down restaurants instead which all seemed to be pretty good deals. 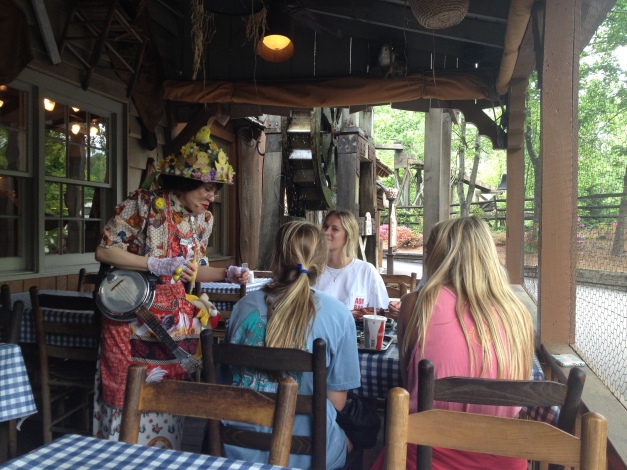 Finally, the park has a sort of Renaissance faire aspect to it, in that there various crafts not just available for sale, but being performed for you: carvers of wax, workers of leather, and blowers of glass, etc. You can order things like a custom aluminum sign for your house, and then watch it being made. 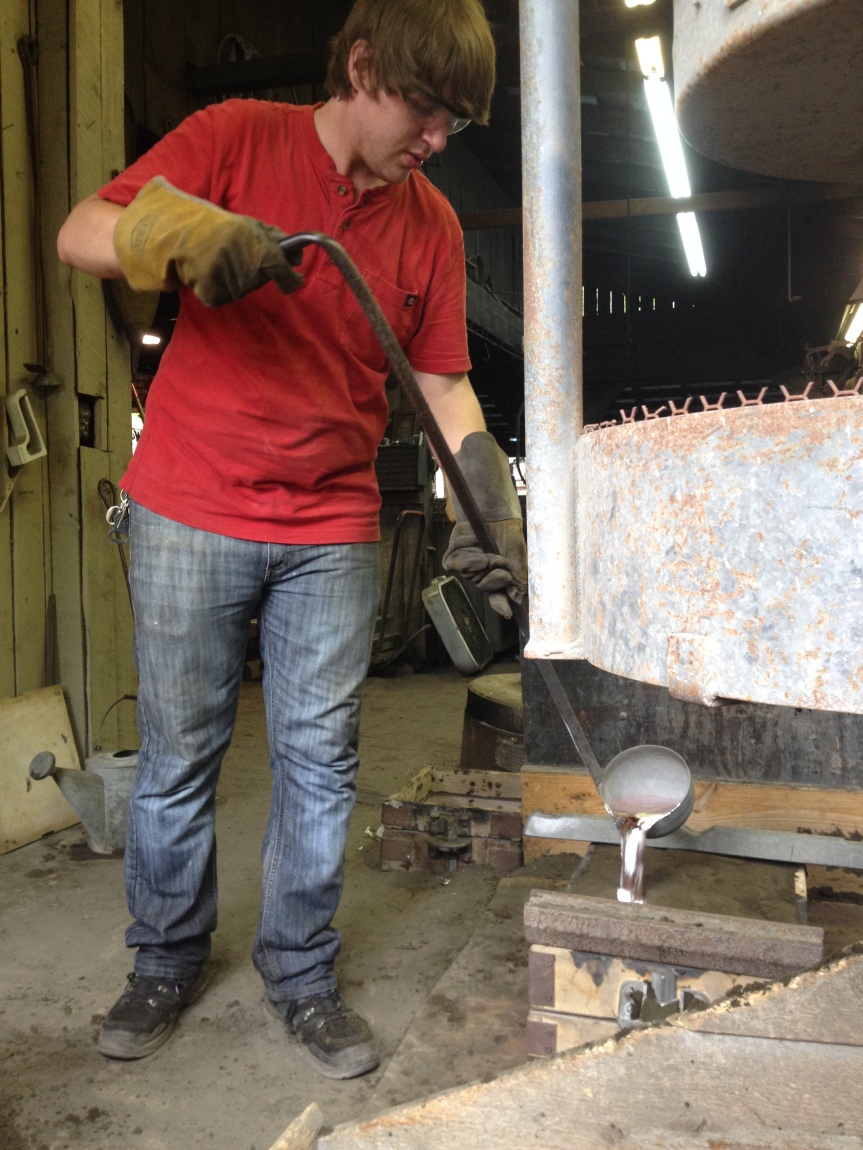