Located at the south end of the Tongariro National Park (the filming location for Mordor, in Peter Jackson‘s Lord of the Rings move trilogy), in the small town of Ohakune, New Zealand (NZ), what is reputed to be the world’s largest carrot. Considered by many Kiwi’s to be an icon, the carrot stands 7.5 meters tall (24.6 Feet), and its known as being one of NZ’s most hugged things.

As anyone who reads my blog knows, I have a sort of perverse love affair with BIG THINGS (this will be my 59th one to blog about), i.e., oversized road-side attractions. You tend to see them in small towns, places that people would otherwise not travel to; with the items built or purchased, as a way to draw in tourists. Casey, Illinois is probably the most obsessive example of this, as in they’ve got EIGHT big things around town that hold the Guinness World Records for being the world’s biggest, for that sort of item. America has a LOT of things like this, with the world’s biggest ball of twine in Cawker City, Kansas, probably being the most famous; it was in the hit movie Michael (1996) where the Arch Angle Michael — played as less than angelic by John Travolta — comes to earth specifically because he wants to see these sorts of things. I argue that anyone doing a road-trip across America is sort of obliged to search them out… because they are “Americana.” That said, once I started road tripping around Australia I discovered they were into this sort of stuff as well, and likewise,  New Zealand also has a few (although neither has as anywhere near as many can be found across the USA.) 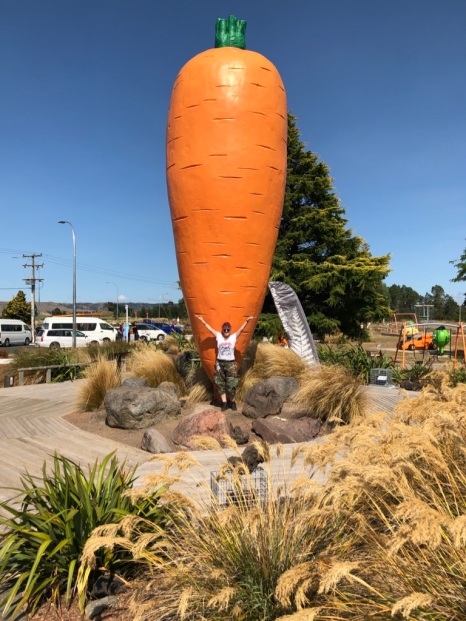 I found a very good Neil Gaiman quote on the topic of road side attractions, in his novel American Gods, which is now one my favorite books (read it three times at least):
“So what is this place?” asked Shadow, as they walked through the parking lot toward a low, unimpressive wooden building.
“This is a roadside attraction,” said Wednesday. “One of the finest. Which means it is a place of power.”
“Come again?”
“It’s perfectly simple,” said Wednesday. “In other countries, over the years, people recognized the places of power. Sometimes it would be a natural formation, sometimes it would be a place that was, somehow, special. They knew that something important was happening there, that there was some focusing point, some channel, some window to the Immanent. And so they would build temples or cathedrals, or erect stone circles, or…well, you get the idea.”
“There are churches all across the States, though,” said Shadow.
“In every town. Sometimes on every block. And about as significant, in this context, as dentists’ offices. No, in the USA people still get the call, or some of them, and they feel themselves being called to from the transcendent void, and they respond to it by building a model out of beer bottles of somewhere they’ve never visited, or by erecting a giant bat house in some part of the country that bats have traditionally declined to visit. Roadside attractions: people feel themselves being pulled to places where, in other parts of the world, they would recognize that part of themselves that is truly transcendent, and buy a hot dog and walk around, feeling satisfied on a level they cannot truly describe, and profoundly dissatisfied on a level beneath that.” 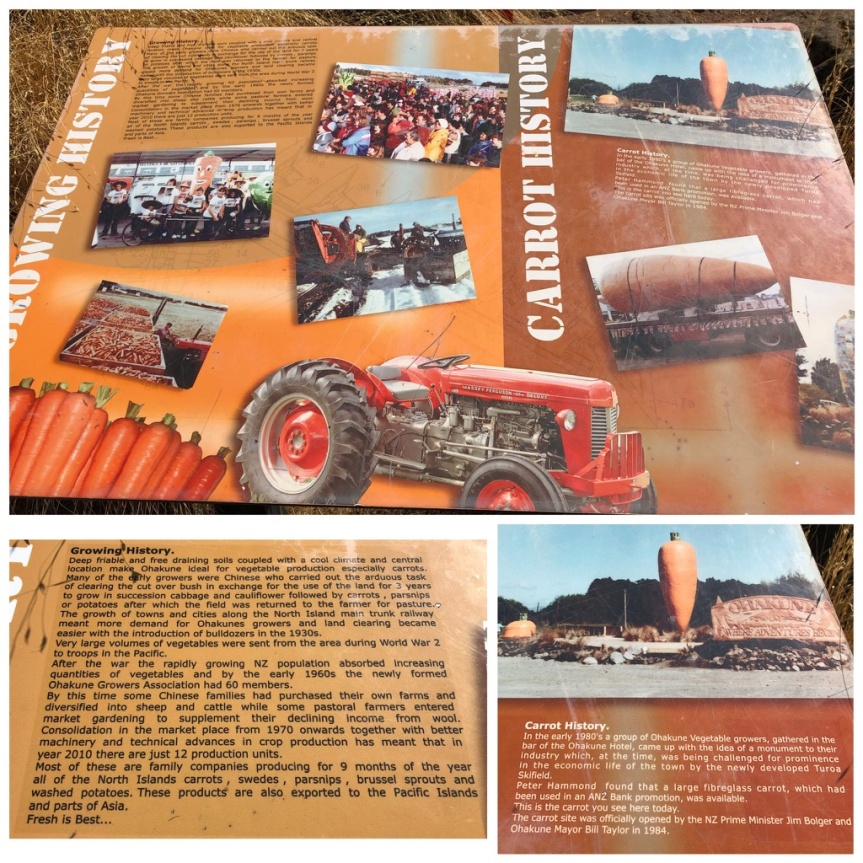 Anyone interested in WHY the big carrot is there, please to read the signs in the images above — basically, it comes down to the town being (for a time) New Zealand’s largest producers of carrots. The fiberglass carrot had initially been made as a TV advertising prop for a bank promotion, but later became available for sale; 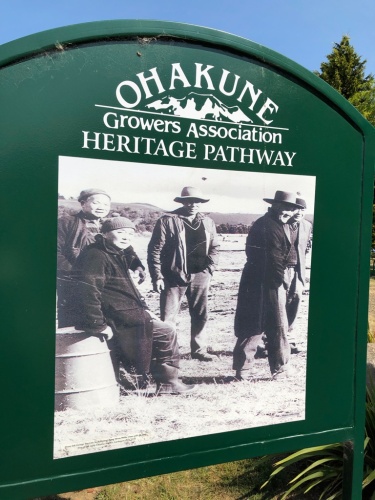 at this point, a group of the town’s vegetable growers Association, who had been looking for symbol to represent their importance to the town (many of whom were Chinese immigrants who had arrived in the 1920’s) bought it. It was then moved from Wellington, it original location, to the entrance to Ohakune in 1984, in a ceremony attended by NZ’s prime minister.

That said, once the ‘dissatisfaction’ stage had passed, I was more than a bit delighted with the activity park that the city has developed alongside the “erection” intended for both young and old to enjoy.

The park includes a massive playground for kids housed with some scary looking examples of other vegetables grown in the area. I think they’re supposed to be cute, but both me and my friend thought they were kind of freaky looking… AND kids are NOT allowed to climb on them, so what’s the point of them being there?

As well as exercise equipment for the adults

This kind of made me sad… the towns forestry industry had added their own presentation section in the park, which included this massive log. According to the History of the log, it had been growing since the 13th century. When they felled the tree  in 1955, and when they got it to the mill they couldn’t use it because it was too big for the saws.. such a waste!

There’s also a small area for people who just want a peaceful stroll through a green area, which feels a bit like walking through a patch of forest, along a stream, and is very restful. We saw more than few folks picnicking there.

What I found amusing about it was clearly paid for with funds raised from local business all of whom got to embed a little advertisement into the concrete.

And for the adults there’s also one of those mini outdoor gyms that are popping up all over place in public parks world-wide.

That said, Ohakune is known for more than just vegetables. As I mentioned upfront, the active volcano in the background of the image above was the shooting location for the Mordor scenes in Peter Jackson’s Lord of the Rings movie trilogy, and is also has earned the being a duel status World Heritage Site both because of both its natural beauty and its religious importance to the Maori people. In summer, it is one of the country’s most popular full day hikes, known as the Tongariro Alpine Crossing, with a terrain towards the top that some have compared to being on Mars due to its utter alienness. While in winter, it turns into something of a ski resort town (more affordable housing for those willing to drive to the slopes), with the closest resort being at Turoa).

In fact that Airbnb we stayed at (it ROCKED, seriously, was like a really good BnB), the owners share their home in summer, but vacate it entirely every winter because of just how much money it earns them as a ski resort rental.