If you’re the sort of person who is into BIG things, i.e., roadside attractions designed to lure motorists off of main roads and into small towns that they would otherwise have no reason to pass through… at least long enough to stop and have a meal or fill up their tank, than you’re going to LOVE Casey IL, pronounced ‘Kay-zee‘ by the locals. 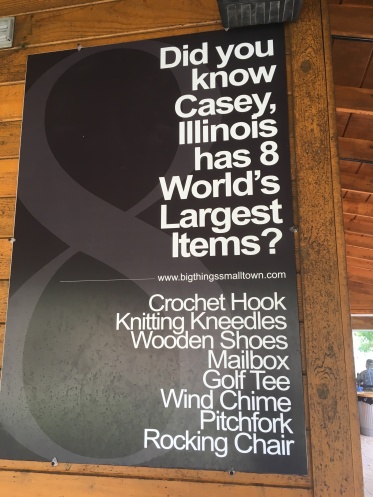 I first heard about Casey NOT from billboards or Tv, but rather from the woman whose Airbnb I stayed in during the Total Eclipse of the Sun that passed through downstate IL on August 22, 2017, (not one I’ll ever go to again, the woman who ran it was kind of despicable in her unmitigated greed) and I had been trying to work Casey into my travel schedule since then.

That said, when I say Casey is a town you probably would never come to otherwise (unless your family or job necessitated it), I mean it ! THIS ladies and gentleman is pretty much the whole of town (plus or minus a side street or two), if you don’t count the fast food options located adjacent to the highway off-ramp, about a 15 minute walk, or two minutes of driving away. 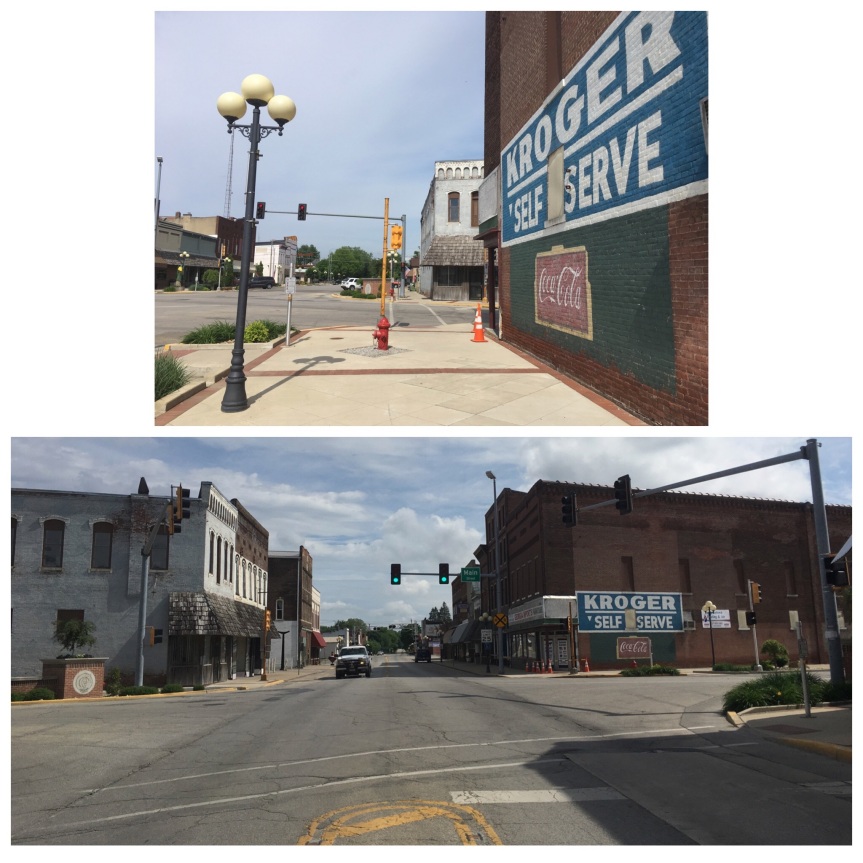 These photos were taken at around 4pm on a Monday afternoon, and so many of the businesses were closed, even the ones that were still in business, that at first I thought I might have made the strategic error of showing up on a Sunday.

Let’s be clear, Casey isn’t just kind of quiet, its dying. According to Wikipedia the most recent 2010 census, the population of the town was 2,762, down from their 2000 census count of 2,942, and while the next census isn’t for a few years, the estimated numbers for 2016 are even worse, 2,698… to put this in perspective the suburb I grew up in has a population of 12,187 and my highschool had a population of about 4,500 when I graduated, although it’s down to about 4K now…

That said, there’s something kind of brilliant in the efforts of town local, Jim Bolin to not only bring attention to his town, but do something to try to revive its economy, which is something I learned from these postcards in his wife’s shop: 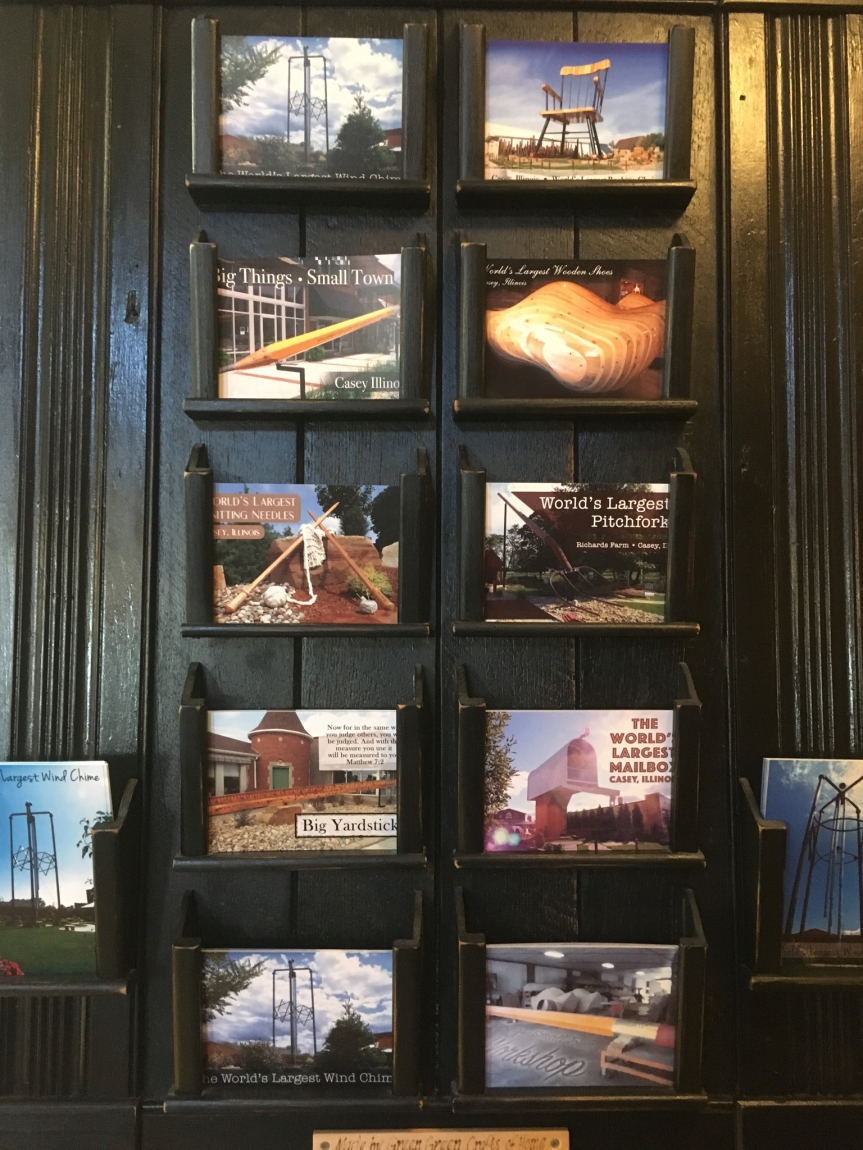 That said, the following video is worth seeing, as Casey made the iconic CBS Sunday Morning show, in that section where they talk about wonderful and/or odd things to be found off America’s beaten paths….

Watching the show I found it really interesting how its producers assiduously opted to ignore a huge element of the oversized objects scattered around town… namely, Casey is a town that takes its love of all things biblical, SERIOUSLY!

Apparently, the wind chimes were the first item Jim built (with the aid of the Guinness organization), in order to hopefully draw traffic from the highway (with the aid of billboards) to his wife’s failing coffee-house, and it proved so successful that he started to create other items to help other stores in town…. that were “appropriate to the business” being helped.

For the yarn store he created the world’s largest knitting needles and a crochet hook, which would have brought me into the store and I might have purchased something, but for the fact that in spite of it being a Monday afternoon, the place was closed. (I’m pretty sure these had biblical text on them as well, but since the store was close I don’t know what it was.) 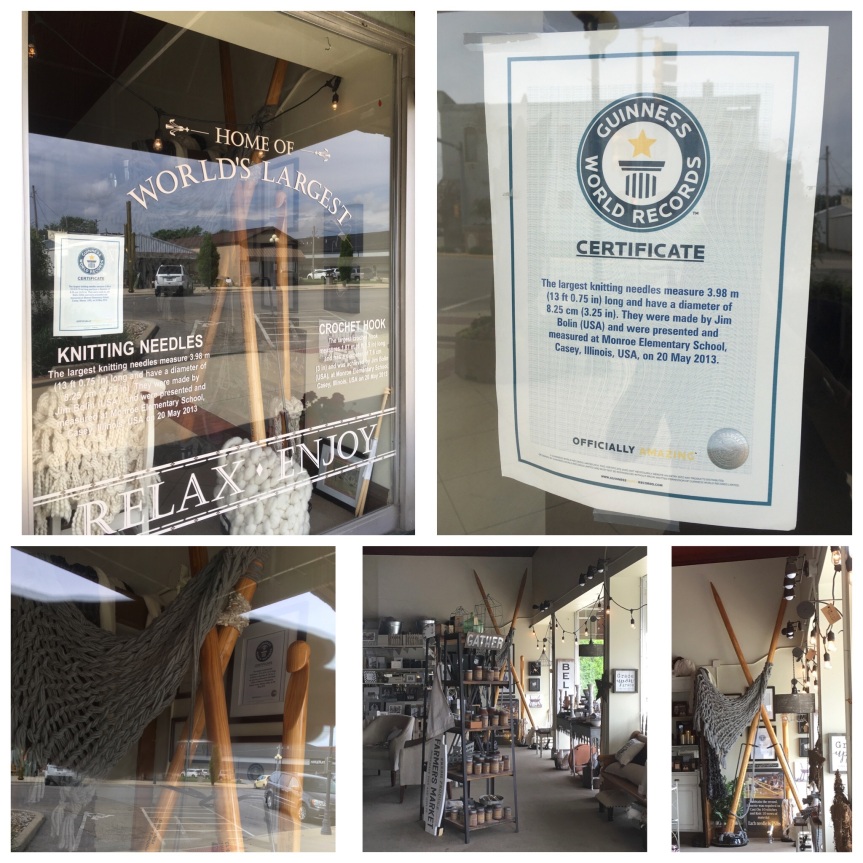 … But that said, THIS is the password for the free wi-fi his wife’s business, the local coffee-house, offers. My provider is T-mobile and while my phone worked there, there was absolutely NO data other than this available for me in the whole town; otherwise, I might not have spotted this. 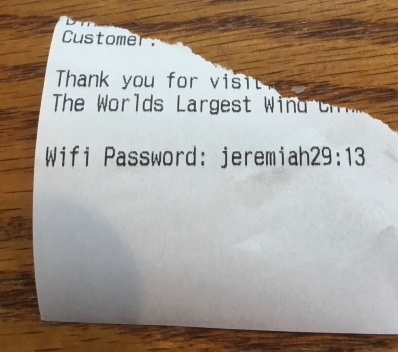 I looked it up, the verse is “And ye shall seek me, and find me, when ye shall search for me with all your heart.” Once I saw that, I got a tad suspicious, as it’s not the sort of thing you expect as a WiFi login outside of a religious institution.

After seeing the WiFi password it quickly became clear that every single one of these oversized item in town (from what I saw), while it does clearly serves to help bring customers into the various stores who might never otherwise enter them, each item also comes with an apropos bit of evangelicalism … via bits of biblical text. 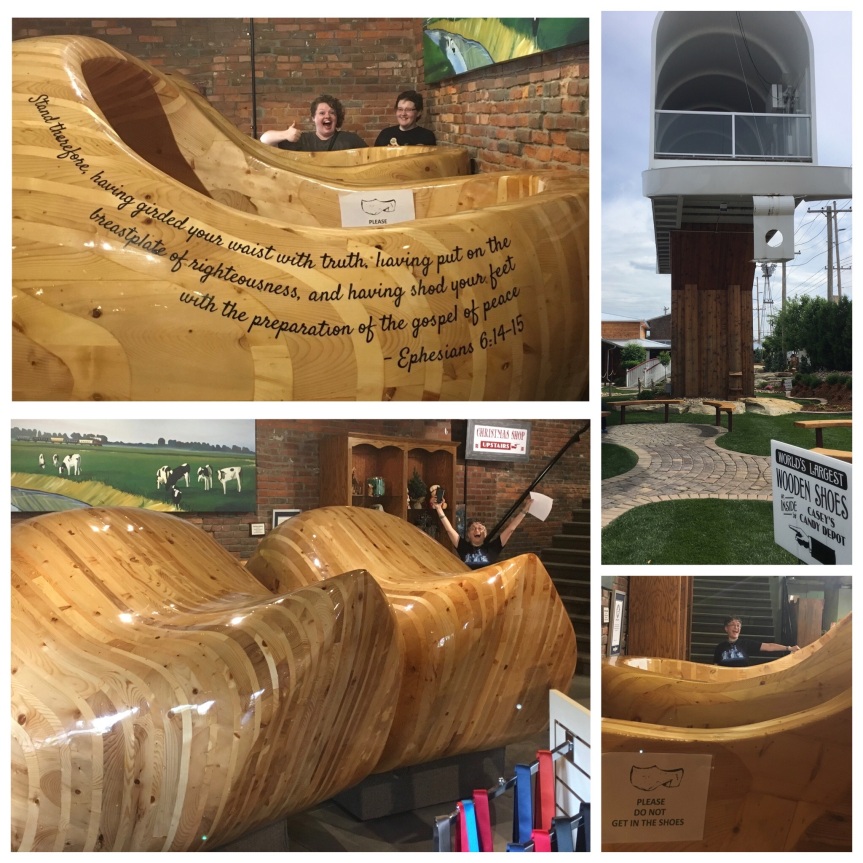 According to the (very) professional video located at this web site, the shoes weigh 1,500 lb, and according to the video from CBS, not only does the mailbox work, but if you mail things from it the postmark stamp says “world’s biggest mailbox” rather than Casey, IL. (Wish I’d known that when I was there, I’d have sent some post cards.) 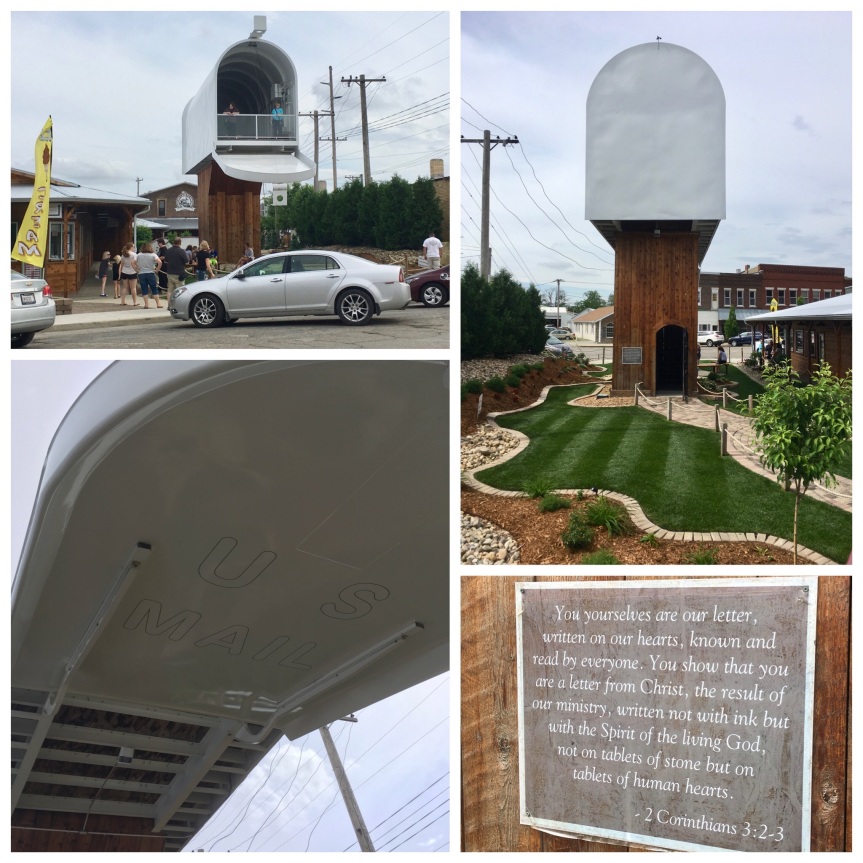 While most of the items are located in the downtown area, and were kind of easy to find with these sign posts that were scattered around town: 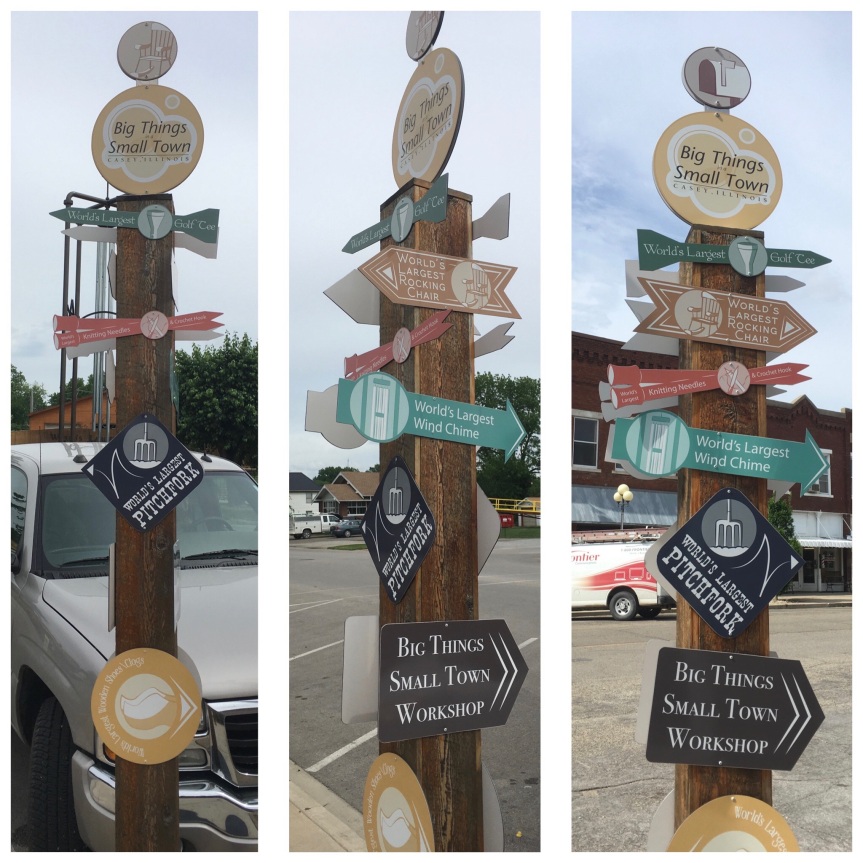 While the final two items, the golf-tee and the pitchfork were both in locally owned businesses (not a national chain, etc), these were not in the downtown area but rather nearer to the highway. 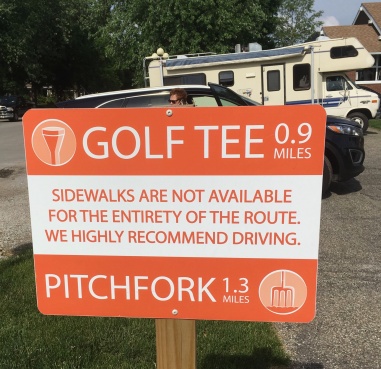 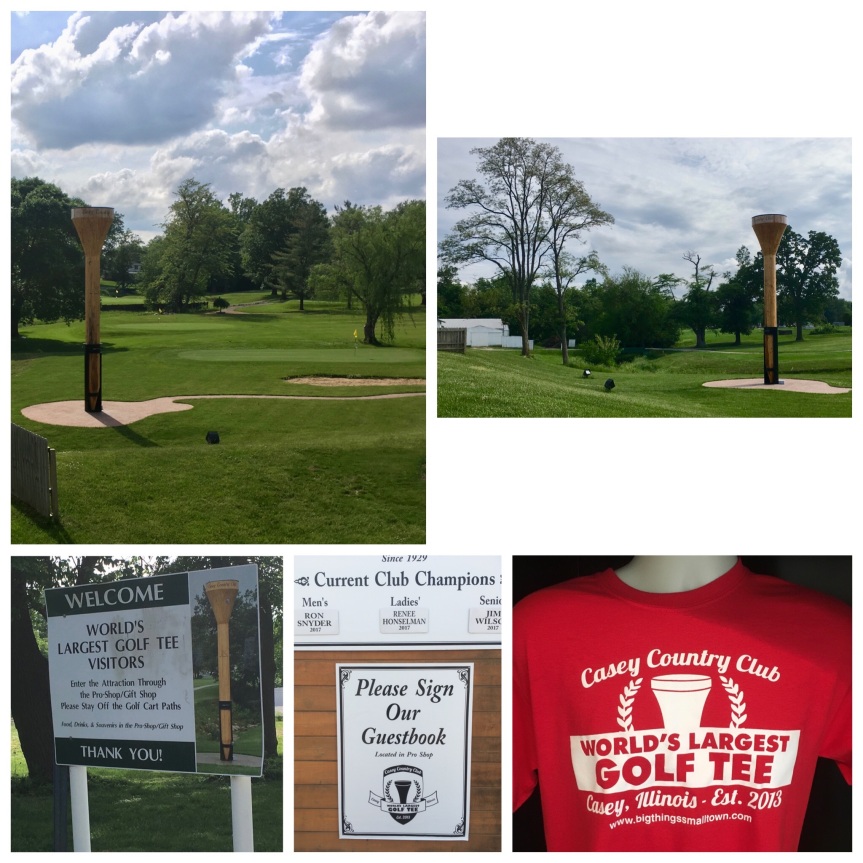 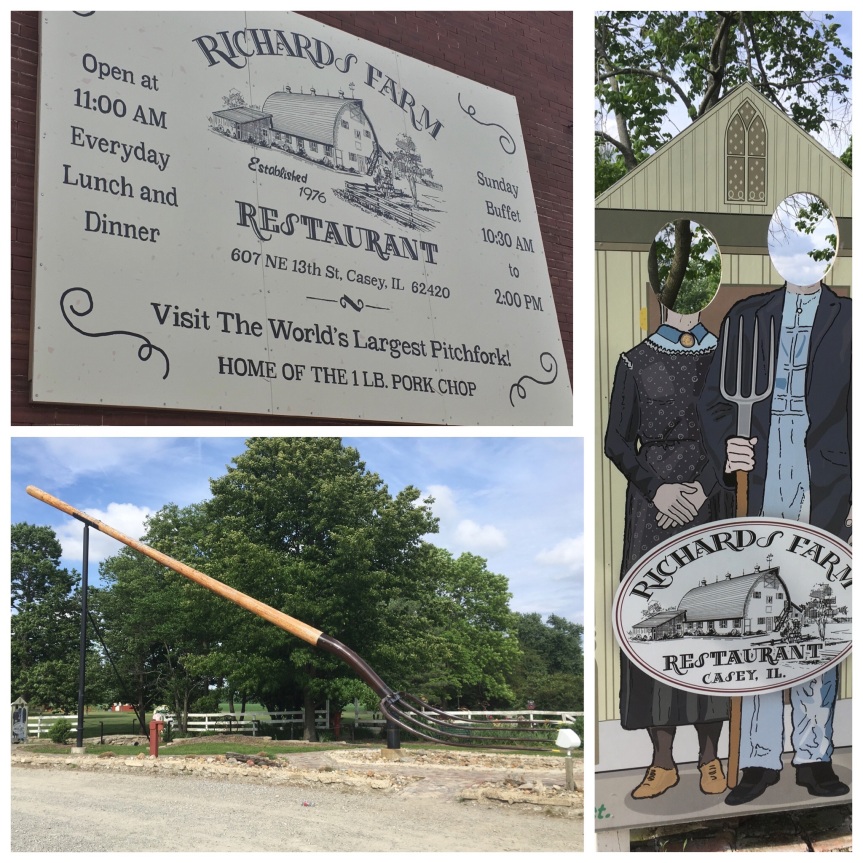 In addition to Guinness World record holding items, there were also other big items scattered around town items that did NOT earn that merit, but were none the less very big… and again, evangelical…. 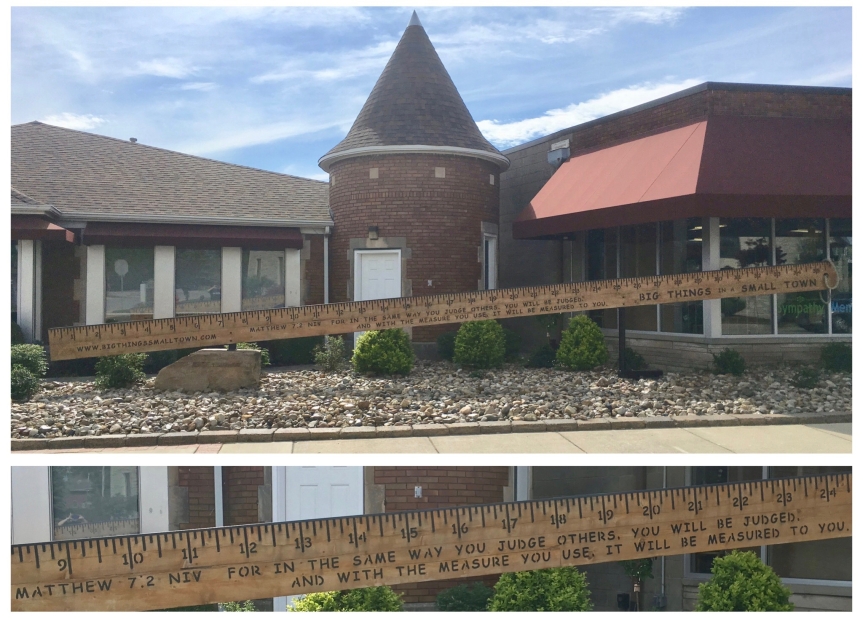 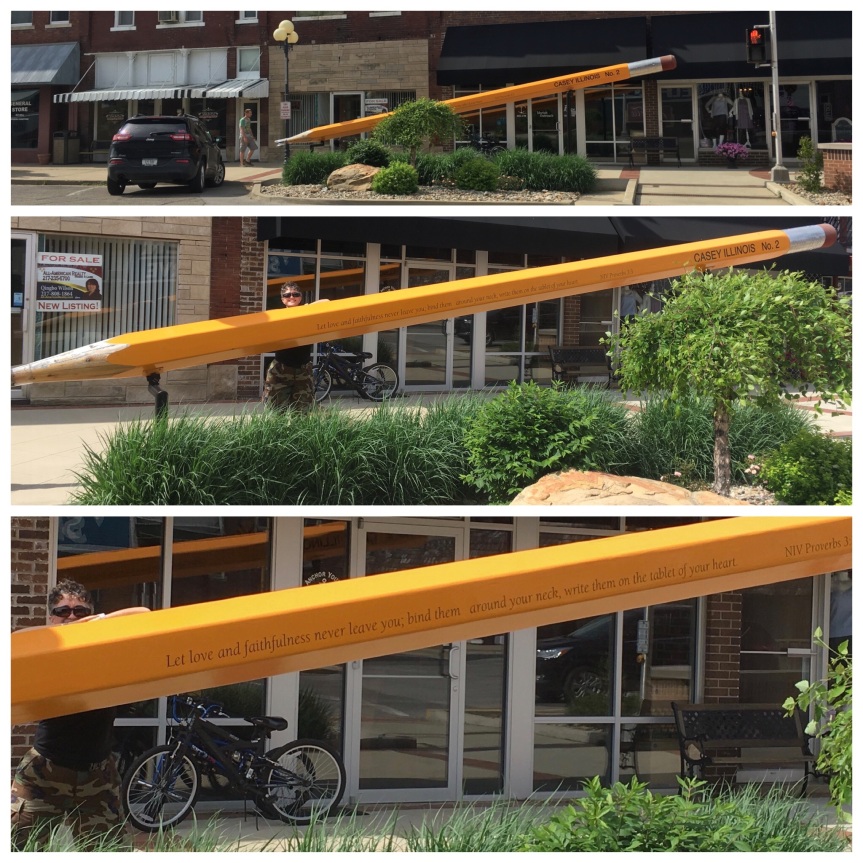 Also while walking around town, I came across this sign referring to a road I’d never heard of, “The National Road” 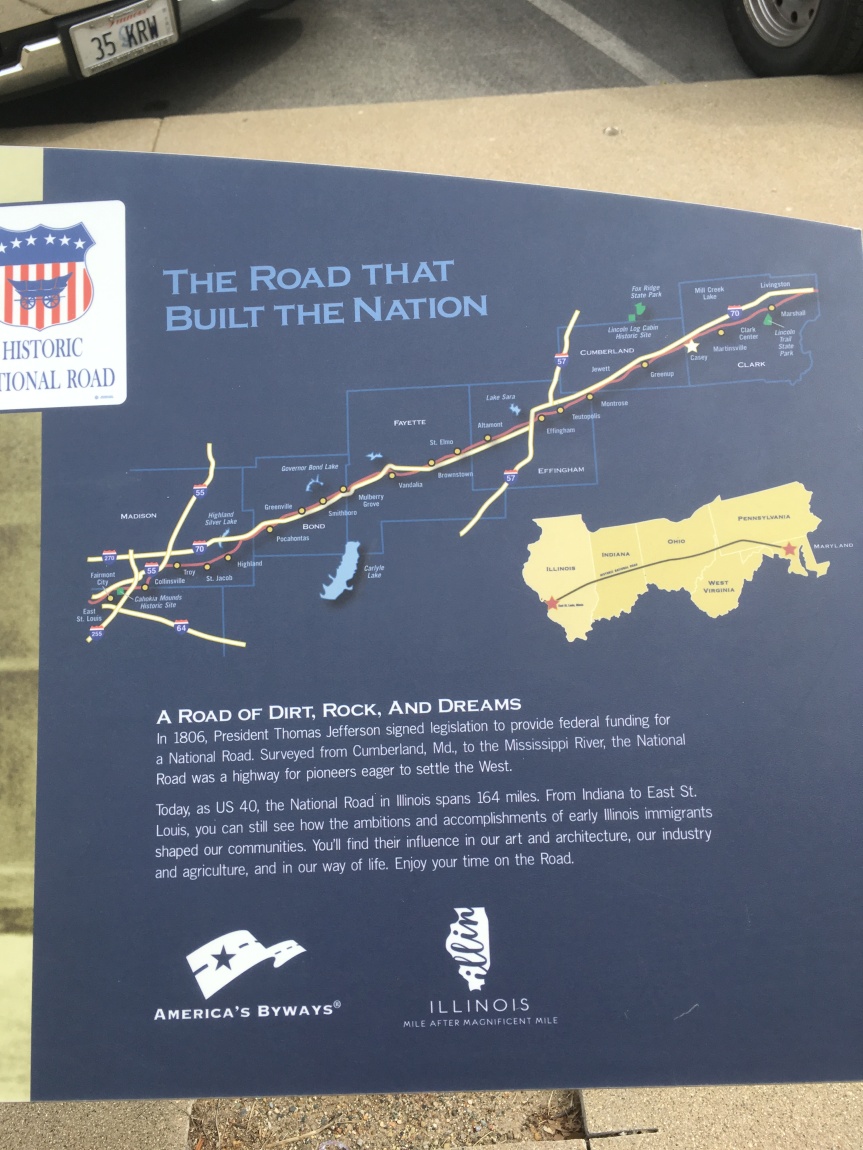 … it wasn’t until I got home and wrote this blog that I learned it was actually the Cumberland Road, the first federal highway built by the United states government, which ultimately became route U.S. Route 40 …. so of COURSE that I had heard of that …

That said, there’s a quote from one of my favorite books, American Gods by Neil Gaiman, that comes to mind anytime I’m in one of the tourist trap/roadside attractions

“So what is this place?” asked Shadow, as they walked through the parking lot toward a low, unimpressive wooden building.“This is a roadside attraction,” said Wednesday. “One of the finest. Which means it is a place of power.”“Come again?”“It’s perfectly simple,” said Wednesday. “In other countries, over the years, people recognized the places of power. Sometimes it would be a natural formation, sometimes it would be a place that was, somehow, special. They knew that something important was happening there, that there was some focusing point, some channel, some window to the Immanent. And so they would build temples or cathedrals, or erect stone circles, or…well, you get the idea.”“There are churches all across the States, though,” said Shadow.“In every town. Sometimes on every block. And about as significant, in this context, as dentists’ offices. No, in the USA people still get the call, or some of them, and they feel themselves being called to from the transcendent void, and they respond to it by building a model out of beer bottles of somewhere they’ve never visited, or by erecting a giant bat house in some part of the country that bats have traditionally declined to visit. Roadside attractions: people feel themselves being pulled to places where, in other parts of the world, they would recognize that part of themselves that is truly transcendent, and buy a hot dog and walk around, feeling satisfied on a level they cannot truly describe, and profoundly dissatisfied on a level beneath that.”

So who knows, maybe there is something special about Casey…

One thought on “Casey IL: the land of 8 world record holding big things, and a lot of Jesus”