Only an hour after having seen the eclipse it was like trying to remember a distant dream. 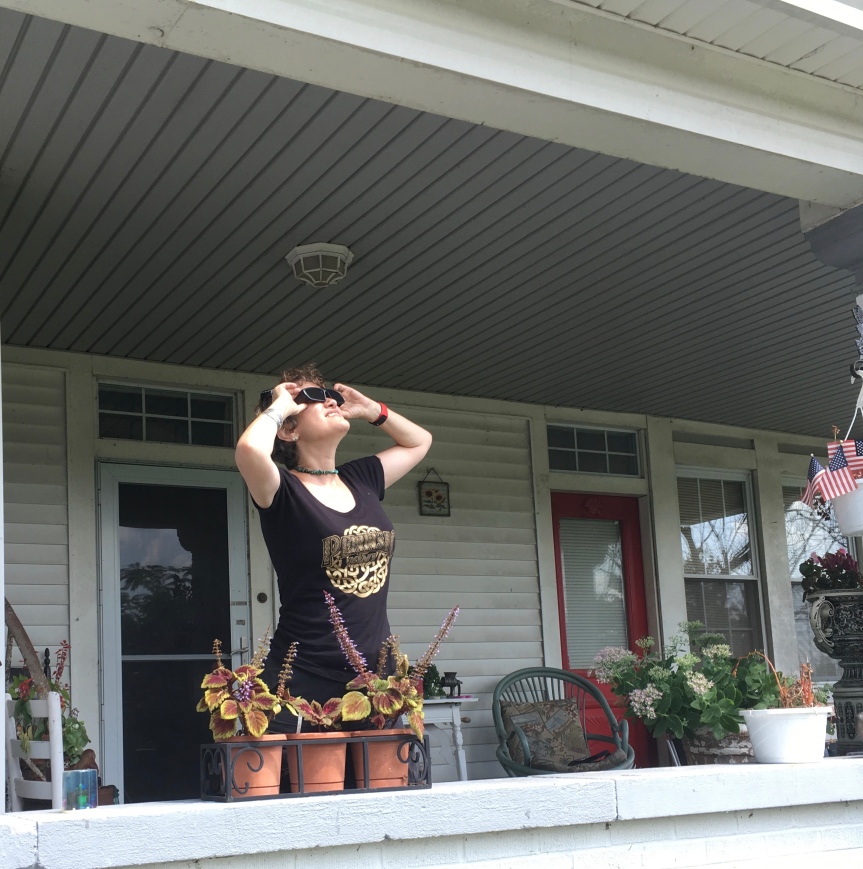 I have always wanted to see a total eclipse of the sun, in fact it has always been a “bucket list item” — things to do or see before you die (i.e., kick the bucket). And now that I have, I can honestly say that it was a far more amazing experience than I thought it would be…

I now understand why it totally freaked-out folks back before they understood what was happening. We of course now know it’s coming WELL in advance… to the extent that people will book rooms along the path of totality as early as two years before the event…

And, with our trusty NASA approved special eyewear we can watch the whole process as it progresses from partial, where the sun looks not unlike the phases of the moon but over the course of about an hour… through to the total eclipse which looks unlike anything you’ve ever seen.

That said, I thought I knew what to expect. There are no shortage of pictures of the total eclipse, from those taken by folks who went out and purchased thousands of dollars worth of special equipment (which some of my friends have done) to what can be achieved by just putting your safety glasses in front of your cell phone’s camera lens (possibly not the best of ideas) … but no matter how good they are, (and this site has some of the best I’ve seen so far 10+ Of The Best Shots Of The 2017 Solar Eclipse) the fact remains that NONE of the pictures I’ve seen to date manage to catch the glorious even that my eyes saw.  The “closest” if it’s not photoshopped is one that I spotted on facebook:

But even the photo above isn’t ‘right’ … although it does approach the beauty of the thing.

To quote my friend Brad Templeton, whose blog comment I’ve been paraphrasing since I first read it, “Totality is everything: The difference between a total solar eclipse and a partial one — even a 98% partial one — is literally night and day. It’s like the difference between sex and holding hands [only I now think that what he really meant was it’s the difference between an orgasm and holding hands] the total eclipse is by far the most spectacular natural phenomenon visible on this planet. Beyond the Grand Canyon, Yosemite, Norway, etc. So if you can get to totality, get there. Do not think you are seeing the eclipse if you don’t get into the zone of totality.”

This is not to say partial isn’t worth taking the time to look at, it is… it’s exciting. And as the partial extends towards totality some cool things begin to occur. Even if it’s the middle of a sunny day, bugs and birds will start to get confused, and think it’s either overcast (for the bugs) or moving towards sunset, for the birds… and they’ll begin making the sorts of noises you don’t expect to be hearing at 1:00 in the afternoon. And then when the partial begins to approach totality the spaces between the leaves on the trees will act like pin hole cameras, projecting some cool looking shadows on to the ground.

But then totality occurs and even if you aren’t looking up at the sun, it’s obvious that something completely different is happening. Firstly, if you’re at all color sensitive — anyone trained in the arts as I was, will be… and this is doubly true for trained photographers (I think) …. The quality of the light all around you is just… well DIFFERENT; it was like sunset but with a lot of blue instead of reds and yellows. It was like what I imagine standing on a different with a blue sun rather than a yellow one must be like….

And then the colors directly around sun during full eclipse, no photo I’ve seen managed to get it … What I do remember seeing was a black circle surrounded by a sort of radiant blue light that moved from darker blue near the circle to lighter and then to yellow rays…  It was unlike anything I’d ever seen, so I’m not sure my brain in the 2+ minutes it lasted was able to really grasp it, but that said, it was radically different from the experience of the partial eclipse.

Also now I understand why folks plan their travels around seeing it over and over (something that to be honest I always thought was a bit — well if you’ve already seen it three times why are you putting in all this time and effort, let alone expense, to see it again? NOW I get it) Those 2+ minutes of full eclipse are a radically different experience than the partials leading to and from… and I’m already talking with friends about maybe heading down to south American in 2019 for the next one which is supposed to cross Chile and Argentina.