While the PLAN had been to spend the whole day attending a series of events that were scattered around the city through to the massive fireworks display at night, the only thing we managed to attend was a rally in support of the Australian Aboriginals (because I fell down and went boom). However, while at the march I learned that, their presence on the land, for a myriad of reasons, is STILL not legally recognized, either NOW or historically, because of a legal declaration made by the British 200 years ago that the Australian continent was terra nullius (i.e., empty of humans). The mind boggles, really it does.

On top of that, a major issue that apparently hadn’t really BEEN until just this year, was the fact that Australia day, which celebrates the landing of the first boatload of western settlers is also, from the Aboriginal point of view the day that marks the west’s invasion of their historical lands (kind of like Columbus day and the 4th of July rolled into one). 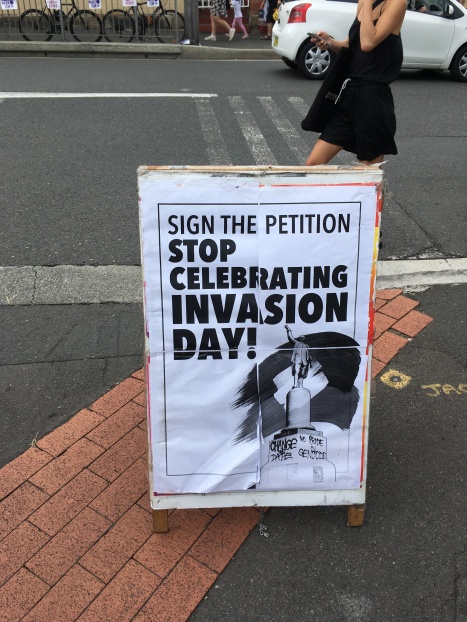 Anyway, my friend that I’m traveling with is fairly solidly left wing in his politics, and told me that while I didn’t have to come with if I didn’t want to, this is the event he would be attending first thing in the morning (as in we had wake up way earlier than I’m used to in order to be there on time, which may have been part of why I tripped), but since I didn’t know much about Aboriginals, in spite of my background in Native Americans, I decided I should go with him. AFTER we were going to go do all the more sort of normal celebrate the day things.

The following is the details about the rally from their facebook page:

“Invasion Day 2018 rally:
The war on Aboriginal people continues… Sovereignty and Justice Now! This rally will mark 230 years since British military forces invaded Gadigal land and declared British rule over this continent, along with Aotearoa and other Pacific Islands. While colonial regime continues to hold a day of celebration, we resist the ongoing war against Aboriginal people. From the brutalisation of black youth in detention, the murder of men and women in custody, the theft of children from families, the destruction of Aboriginal lands to feed corporate profits, the apartheid NT Intervention, the forced removal of communities,First Nations on this continent are under heavy assault from a new wave of dispossession. But the fightback is also growing and urgently needs your support. This rally has been initiated by Fighting In Resistance Equally (FIRE), a coalition that organised last years impactful and successful “Invasion Day 2017 rally – no pride in genocide!”
Also the last two successful marches on human rights day, December 10 last year and this year.

FIRE believes that standing against the colonial system and the racist mindset that was brought here in 1788 is crucial to all struggles against oppression and exploitation.”

So yesterday, before I hit the floor and went boom, at the march/protest in support of Aboriginals … I had questions.

Firstly I must admit that my eyebrows went up when we first arrived to see what was clearly socialist types coopting what was supposed to be a pro aboriginal thing with their own stuff… HATE when that happens in the US when whites try to co-opt Native American protests… Or the way I learned that moveon.org, after I signed their initial petition about how the Feds should “move on” from being obsessed with Clinton’s sex life, felt that as I had signed ONE thing they believed in that give them the right to put my electronic signature on EVERY petition they were coming up with … so that now I just won’t sign any of those things anymore and at one point sent MoveOn an angry cease and desist email.

And then I was SERIOUSLY put off by the fact that they put up a Palestinian guy to speak who was making false comparisons (if you support the Aboriginals you must support the Palestinians) and blaming the Israelis for atrocities that WERE done to the Palestinians, no doubt … ONLY it was by their Jordanians and Syrians “brothers” rather than the Israelis who had done them, but rewriting that history to put it all on Israel’s back… and he even had the audacity to claim we’d done child abductions, when the PLO had ACTUALLY been abducting Christian Lebanese children and turning them into child warriors before the Lebanese war …. I think he thinks that when Israel offers free health care and university degrees and such, we’re abducting their kids… and watching all the young hipsters nodding their heads with how right he was… set me off no end…

Basically (and modern genetic testing techniques back me up on this) we were arguably there before the Palestinians — although more than a few Palestinians would be shocked to learn, and the genetic testing also backs this up, their ancestors had been Jews and were forcibly converted to Islam generations ago at the point of a sword — and we were driven off our land by waves of invaders, and from my perspective Palestinians are a bit like… well some time in an alternative reality future, white people — many of whom are actually have Aboriginal ancestry they have forgotten about — being pissed off because Aboriginals who had escaped the genocide in Australia, got rich, came home and bought up all of Sydney and then declared an Aboriginal state, saying the white people could continue to live there but they would have to adhere to aboriginal law. It in fact would make a pretty good alternative reality book…

Add to that the fact that I was tired, and it was really hot, and I was NOT in a happy mode towards the start of that day…

So I immediately had some doubts about pretty much anything I heard after that… There was a chant, “always was, always will be aboriginal land” which I couldn’t quite make sense of. If it were true, does that mean all the young middle class hipsters who were chanting it were willing to contact some suffering Aboriginal families and put their money where their mouth was? “Hey, I’ve been chanting this, I own a couple of properties around Sydney I inherited from my family…. I’ve decided my family stole it from you guys so HERE, take my property I’m sailing back to the UK?” Don’t think so… so WHAT in fact did the chant mean?

My friend who I travel with was trying to explain it to me, but then a complete stranger who was walking near us, was this nice guy called Luke who offered some very coherent explanations, and for the rest of the march he became my teacher, explaining in a lot of detail stuff I had not known.

With regards to the chant, NO, Luke agreed I was right, none of these guys were likely to hand over their homes, but it was more of a constitutional issue. Until quite recently there hadn’t even been any discussion that the Australian constitution should even recognize Aboriginals as having been there first (which in this day and age is kind of head scratcher, and completely inconsistent with how the rest of the world views Australians), and the constitution here still doesn’t although discussions have commenced. (I did note later to my friend that the ONLY reason the US constitution is any different, in case you didn’t know we have always legally recognized the tribes as “dependent sovereigns” even if we didn’t stand by our words, is because at the time of the founding we were at war with the French and NEEDED the tribes on our side in that war.) But there’s apparently push back from the sort of Australians who would have voted for Trump (the sorts who were wearing Australians flags yesterday, instead of showing up at pro aboriginal protests), who like in the US don’t tend to be the folks living in cities — although some of them do (and it’s pretty easy to spot them on Australia day). To paraphrase his friend Sonja, who we met up with at the event, there are 3 sorts of Australians… the all white and claim their ancestory to early settlers “we’re Australians! This is OUR land” crowd… then there’s the urban yes we’re Australians but we feel really bad about what was done to the Aboriginals crowd, and thirdly the more recent recent immigrants and or refugees or first generations folks who are of the “we’re just happy to be here” crowd…. but then we agreed there’s a 4th group, the “who gives a fuck about politics this is just a day off work” crowd. And I learned there’s a Northern territory that isn’t actually under the same laws as the rest of the country (from a legal viewpoint a bit like Louisiana which has a completely different legal system from the rest of the USA, or Canadian territories which aren’t actually states) and in these Northern territories some pretty gruesome stuff is still happening, kids still being separated from parents without due process, etc — which I had not ever heard about before.

So I learned a lot. It was good… and after that we attended a thing in a park where aboriginal dance groups and singers performed, and various aboriginal artists exhibited their works

After, I found these articles about the march in Sydney and some others around the country… was kind of hoping I’d spot me of my friend in the march, but so far no luck. 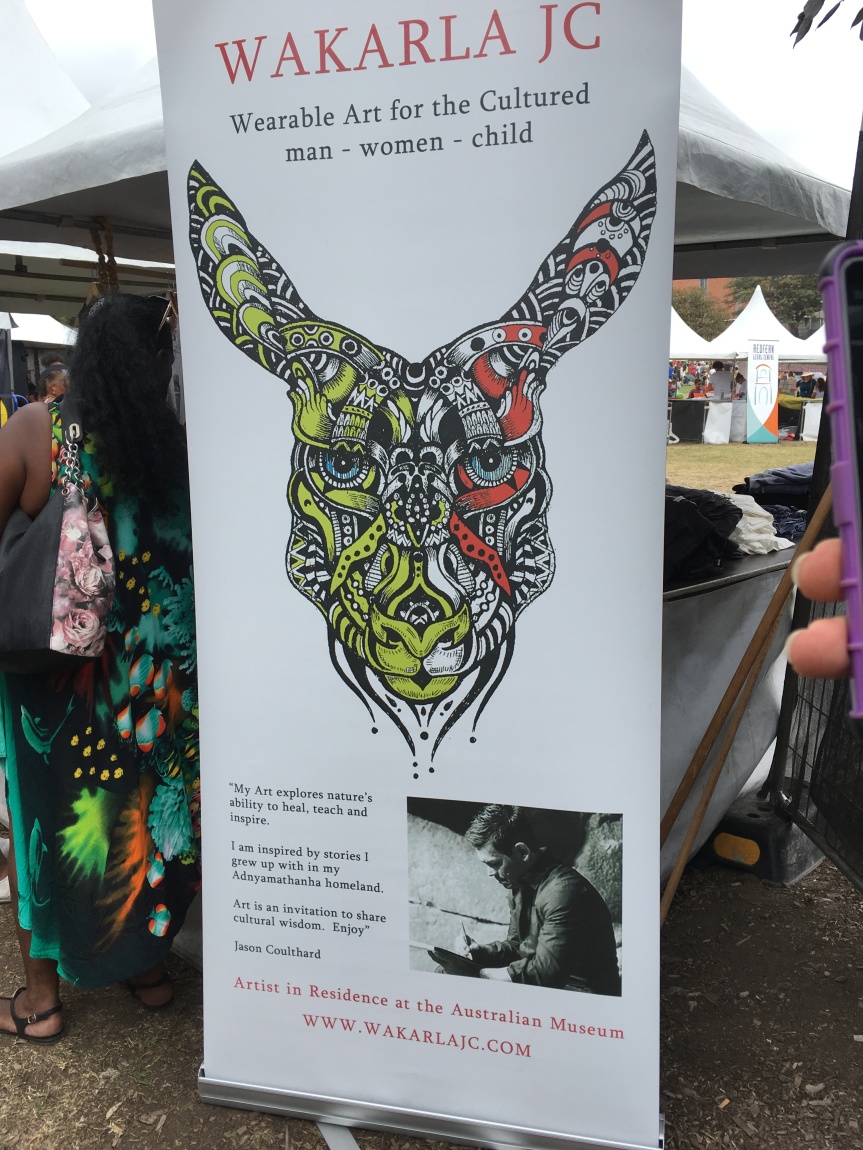