Man Friday is a BYOB cafe, open only in the evenings, that describes itself as serving Mexican food, but doesn’t. It is located in Nelly Bay on Queensland’s Magnetic Island (which for gubernatorial reasons is technically considered part of the mainland city of Townsville). I shouldn’t be too hard on it; my travel partner, who is originally from Sydney, but has lived for almost half his life in California and has spent a lot of time in Mexico, likes to try every “Mexican” restaurant he finds in Australia, in large part because almost NONE of them get it right. He’s always curious, and hopeful, that he’ll find one that does, but admits its pretty rare that it happens. This would not be one of the NOT ‘authentic’ ones…. but it is tasty for all that.

My travel partner and I spent a week at an Airbnb in Nelly Bay, and as there were only a handful of food options in Nelly Bay we did our best to try all that we could, and this was one of them. And like I said, this was one of the ones he was wanting to try … as part of his ‘do they have real Mexican food’ test. To the owner’s credit, she (I think it’s a she) recognizes that Mexican and Tex/Mex are not in fact the same thing, and that’s exemplified by her menu. 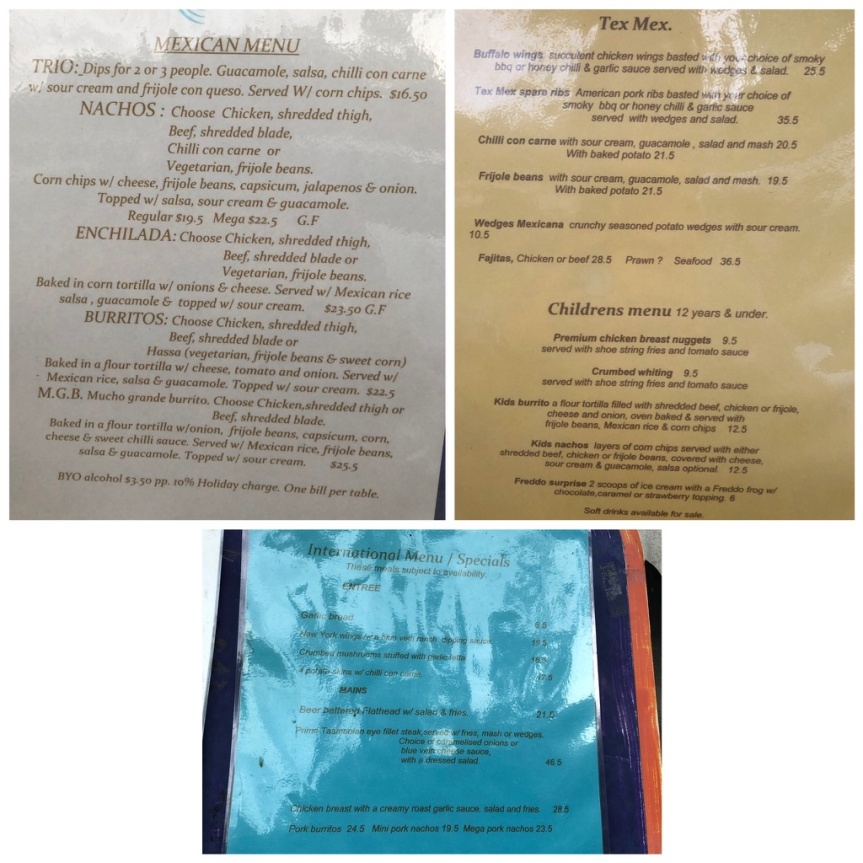 That said, the owners are not actually clear on which is which. Nachos, for instance, while technically created in Mexico, and she has them listed as such …. are not considered to be “authentic” Mexican food; they’re Tex/Mex because they were created AT the Mexico/Texas border for the consumption of Anglos, aka white people. The story is that at a Mexican border-town hotel with a restaurant… back when the border was a lot more porous even than Trump is trying to make it today, the owner, who went by the nickname of “Nacho” … short for Ignatius, had white customers who came in after the kitchen was closed asking for something to eat with their Margaritas. The owner, looked in the kitchen, and threw together a bed of leftover tortilla chips, slopped over them various leftover ingredients, heated it up a bit and served it.

This is essentially the same way the “Chinese” dishes of Chop suey and Egg foo-young came into being …. dishes which you won’t find in any self-respecting Chinese restaurant in American that caters to the Chinese community rather than serving mostly white customers. I am always amused when I take friends to a REAL Chinese restaurants and they get frustrated that they can’t find either on the menus. All of these dishes are essentially what you do with leftover ingredients … they are not “cuisine.”

That said, both my friend and I were, in spite of the in-authenticity of the food, happy with our meals. The woman who runs the kitchen can actually cook. My friend ordered a vegetarian burrito. When I asked him how it was, he said, “Very Tasty! But wrapping is crispy, I’ve never had a crispy burrito before” to which I responded,  “OH, that’s because it’s not a burrito, it’s a Chimichanga” which is ALSO Tex/Mex rather than Mexican. It was created in Arizona but there’s a disagreement as to whether it was a restaurant in Phoenix or Tucson that first did it. That said, it’s yet another example of how Man Friday’s Chef knows there is a difference between the Mexican and Tex/Mex, but don’t fully understand what that difference is. (That, and the refried beans weren’t, they were just beans… the way the British might serve them.) 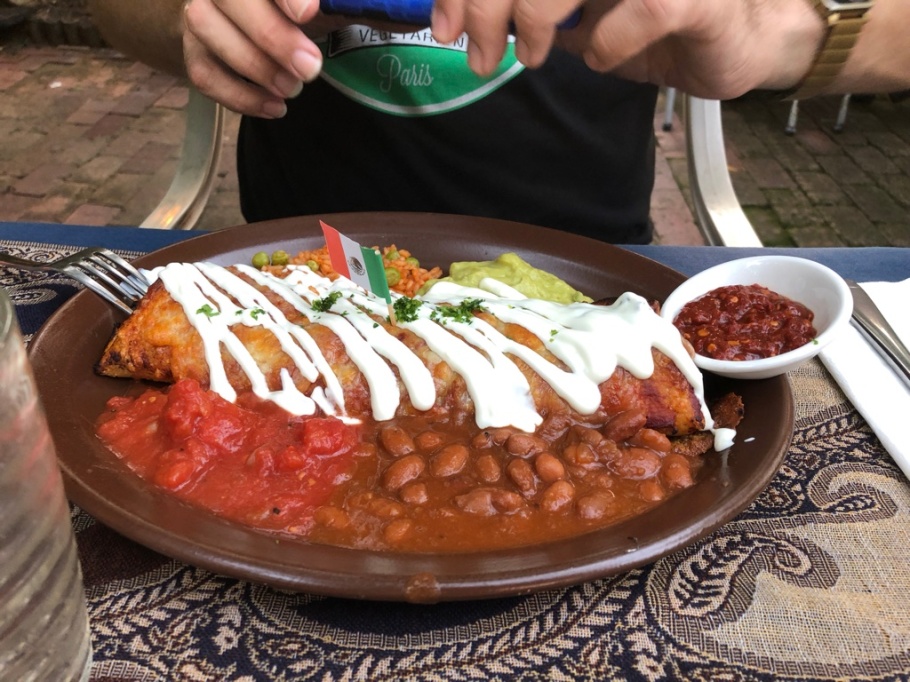 For my dish, since this sort of Mexican food does NOT meet my food needs because of my fatty liver disease — my liver right now isn’t all that different from human Foie gras — was a negotiated affair of what they had in the kitchen that could meet my needs… and I have to say they did a VERY good job of it.

My dinner was a grilled bit of chicken breast, nicely spiced up that was VERY juicy (YAY!!!) with a salad with NO dressing (because that has oil in it) and a little side dish of balsamic vinegar for me to dip my food into. I was happy.

That said, Man Friday’s is for the most part, out-door seating in a VERY pretty garden. There’s not much space, and even less so in-doors, so make sure to make a reservation, and like with all restaurants on the island, be prepared for a LONG wait between ordering and getting your food. Either snack in advance, or order in advance.