At this location along the Trans Canadian Highway there is an educational sign devoted to the wreck of the SS Edmund Fitzgerald. The Ship was a Great Lakes Iron ore freighter that sunk November 10th, 1975, during a storm that contained 25-35 foot waves and hurricane-force winds. The wreck occurred southwest of this location, in the waters of Lake Superior; The ship’s wreck was immortalized in song by the great Canadian singer-songwriter Gordon Lightfoot; and is historically important for all those who work the waters of the great lakes, for how it forever changed the safety regulations upon them. 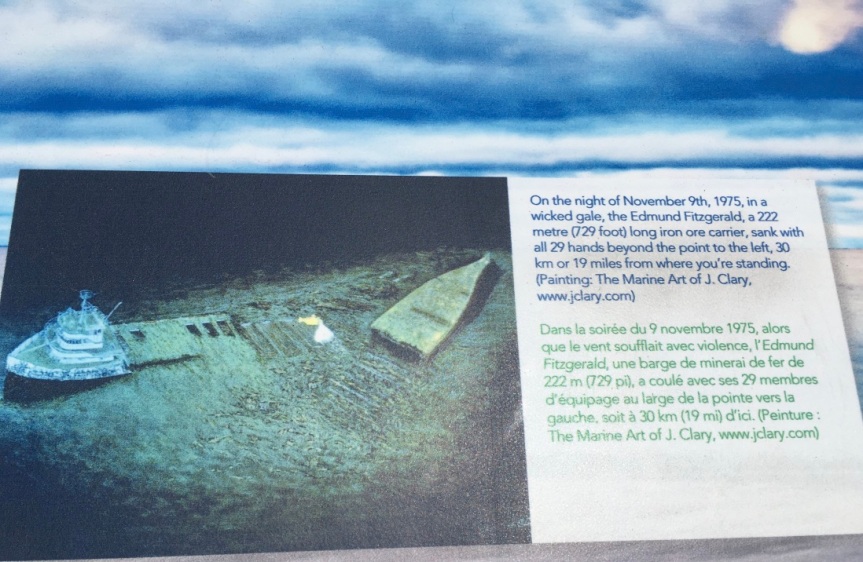 For those who do not know, Superior is the third largest freshwater lake in the world both by volume and the largest by surface area; In fact it is so large that it contains about 10% of the worlds fresh water supply.

And, because of its impressive size and volume, it is large enough to have its own tide, just like an ocean. 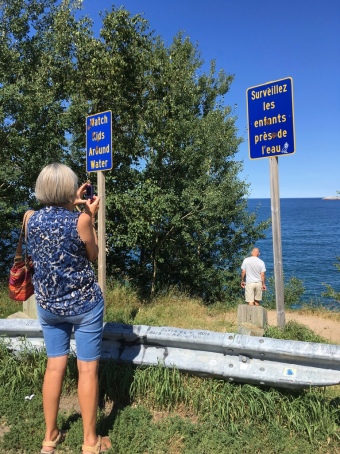 And while it is beautiful, it can also be as treacherous as any Ocean — especially during the months of November.

It has had 350 recorded shipwrecks, has taken over 10,000 lives, and her waters are notorious for not giving up her dead (as in the bodies never wash up on the surrounding shores).

The Fitzgerald had been the largest freighter on North America’s great lakes when it was first launched in 1958, and to this day remains the largest to have sunk within them; and in large part this catastrophe is why no other freighters have sunk on the lakes since then.

The ship went down without a trace, taking along its entire crew of 29, and its singing, along with the notoriety the song brought it, led to changes in shipping regulations on the lakes. Now all boats must carry depth finders, higher freeboards, and undergo more frequent inspections of their sea-worthiness. In addition, these freighters are now required to carry survival suits for every member of the crew, so that even if the boat does go down, the workers can still have a chance at survival.

For those unfamiliar with the song,

I also found this 20 minute video on YouTube called, The Edmund Fitzgerald: a 40 Year Legend which goes into depth about what we know, or think happened to the ship: