If you’re traveling around the state of Victoria in Australia, and want to visit Grampians National Park, which lies about three hours northwest of Melbourne, or a full five and a half hours drive south-east of Adelaide, take my suggestion and seriously consider a stop in the small town of Halls Gap. Based on my own perusal of google maps, of all the various ways into the park (which is a fairly large 646 square miles), Halls Gap is the only one ‘organized’ to support tourists’ needs. It is located on the side of Grampians that is closest to Melbourne, and its the only place where I know of where you’ll find a specially trained and staffed “Information Office” who are ready to provide you with suggestions of what to do while there; and it’s also where you can pick up things like hiking or driving maps, or arrange for various tours of either the parks or of one of the nearby vineyards, book a golf time, book lodging for the night, etc. (If it’s anything like the information offices alongside Roosevelt National Park in the states, their computer’s are organized to tell you which hotels still have availability for that night — but don’t hold me to that as we weren’t looking for lodging.) 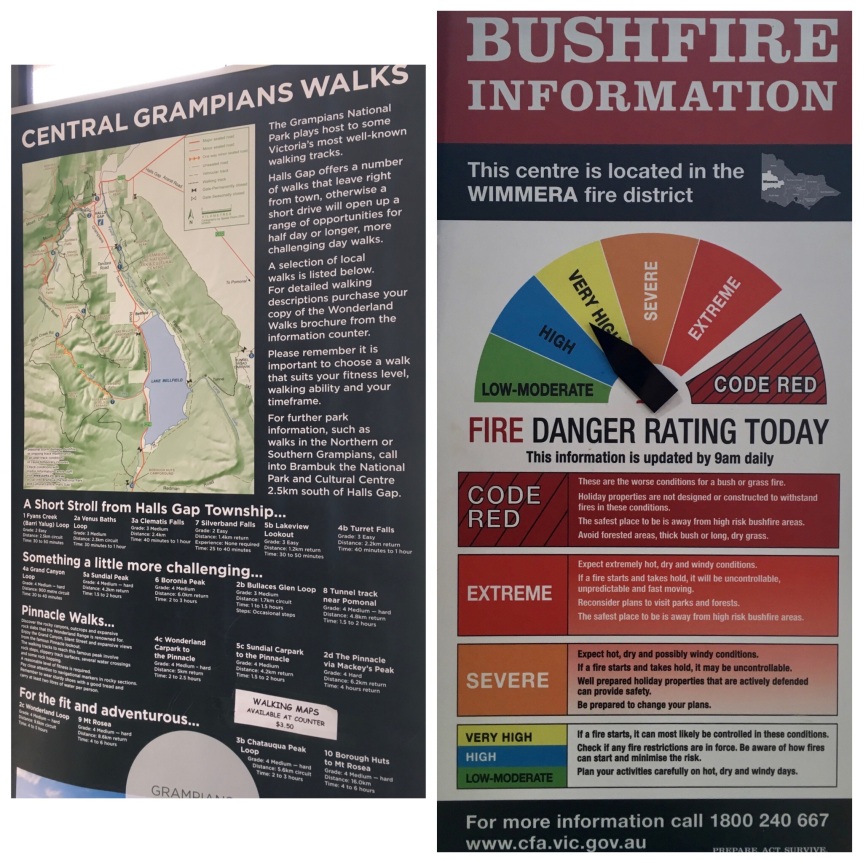 Our first stop was at the information center for maps, and then we went to the nearby Brambuk Aboriginal Cultural center & Bush Tucker Cafe, for a bite to eat (I strongly suggest checking out the Cafe as it specializes in the unique foods and flavors that the native Aboriginals and original European settlers to the Bush would have experienced.. but, that said, the cultural center was kind of a major let down and only suggested if you have time.)

After that we drove into the park itself….. Because this visit was on February 10th, only about two weeks after I fell down and went boom on Jan 25th, giving myself the worst concussion of my life, our visit was limited to easily accessable by car locations… so no hiking for me, not even a little bit. Just sitting in the car, being driven around and seeing new things was exhausting for my brain at that point. Getting out of the car to experience the lookouts was about all I could manage.

Our first stop was at Boroka Lookout

The first time I tried to take a picture of the friends that I was visiting the park with they had their faces completely in the shade, making taking a photo of them almost impossible. The picture of me (above) was me trying to show them an awareness of light what was necessary in order for them to be well-lit in this harsh/high-contrast light situation (things photographers know); that said, the woman on the left is the friend who I was staying with (who serendipitously for me was a former registered nurse, so she perfectly understood my limitations at that point).

Our next stop was at Reeds Lookout and balconies …. apparently from the car park & lookout there’s an easy walk to the balconies, but like I said, I was not physically able at that point to do even that. That said I found a REALLY well done video on YouTube that someone made of the walk and the views I would have seen had I done it: 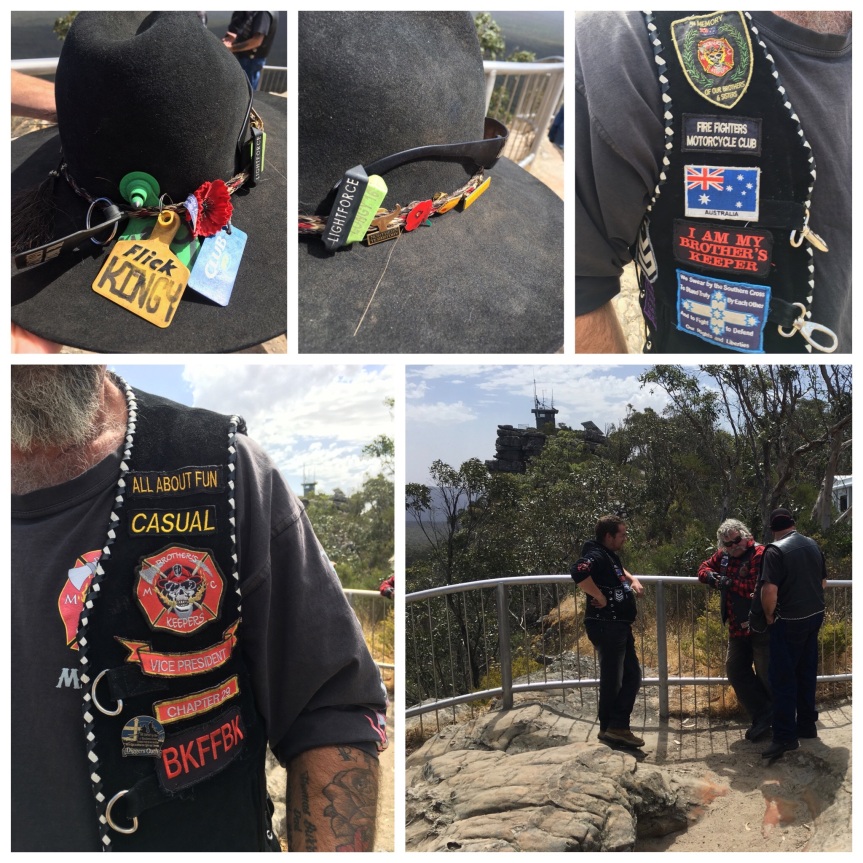 That said, we met up with a fairly large group of bikers, while at the lookout 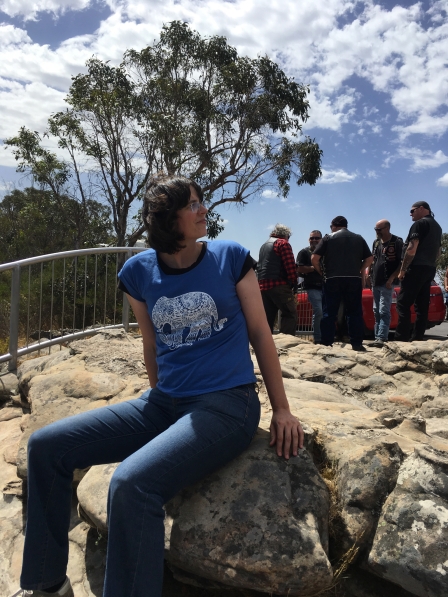 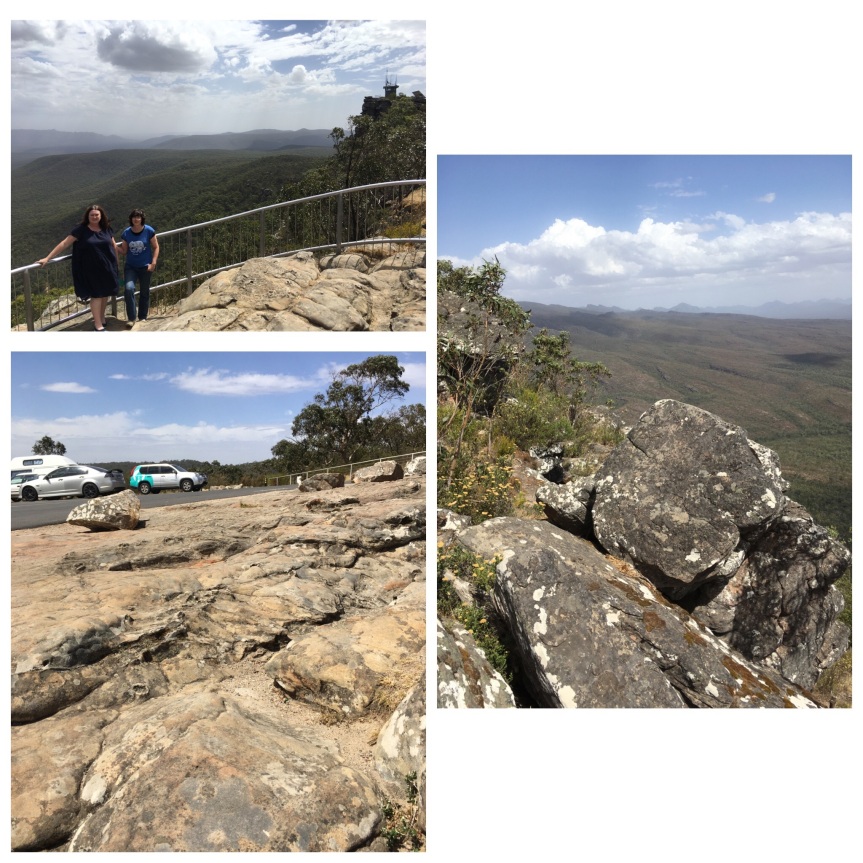 After this we headed to Bunjil Rock Shelter, one of the many Aboriginal religious sites scattered throughout Australia, and then home.