The Birthplace of Abraham Lincoln is located on the top of a hill just outside of Hodgenville Kentucky, in National Historical Park that safeguards both his birthplace and the first home he lived in. Other than that, there’s really not much there. 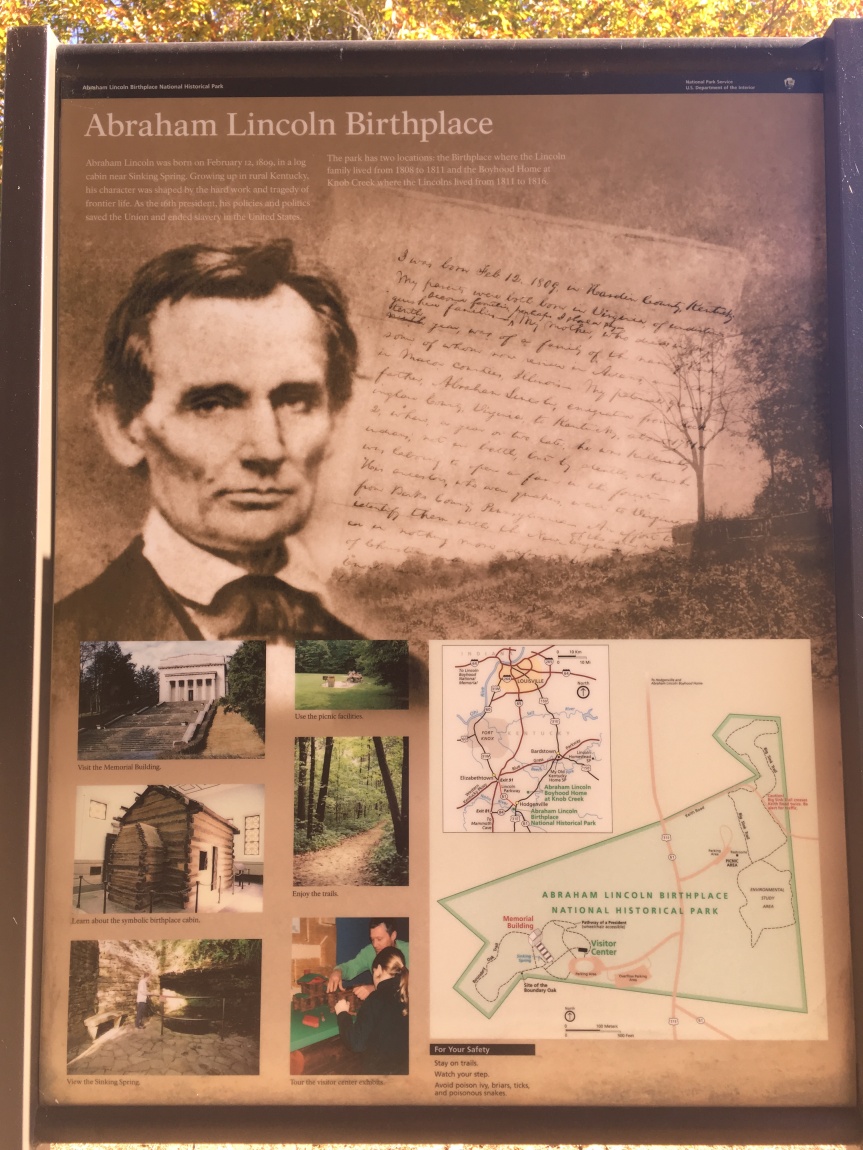 Over a year ago, on Sunday Nov. 13, 2016, during one of my many road trips I had pit stopped at the birthplace of Abraham Lincoln, and for some reason COMPLETELY forgotten to blog about it. (I had been to Zachary Taylor’s Tomb the day before and THAT I had blogged about, but for some reason never did this.) I thought I had, but apparently Not so much. I didn’t realize till just yesterday, when I was blogging about his tomb and wanting to link to the post about his birthplace and wondering where the hell the blog for it had gone to … so I have decided to rectify that lapse now. That said, it’s been a LONG time since I was there, and although I’m looking back in my Facebook postings for notes, those were pretty scarce… so this post will mostly be about the pictures.

So, one thing I did find in my Facebook notes from the day of my visit was that there had been NO WiFi or data accessible outside of the building (I have T-Mobile), although there was some free WiFi inside of it.

Getting up to the top of the building was NOT easy for me. My legs were still very weak at this point, and all of the various ways up to the monument involved a lot of steps (handicapped accessible the place is not)….

Today I learned from Wikipedia that there are in fact 56 steps going up the hill, and that the number is intentional, as it was Lincoln’s age at the time of his death

Here
over the log cabin where Abraham Lincoln was born
Destined to preserve the Union and to free the slave
A grateful people have dedicated this memorial
To unity peace and brotherhood among these states
With Malice toward none, with charity for all 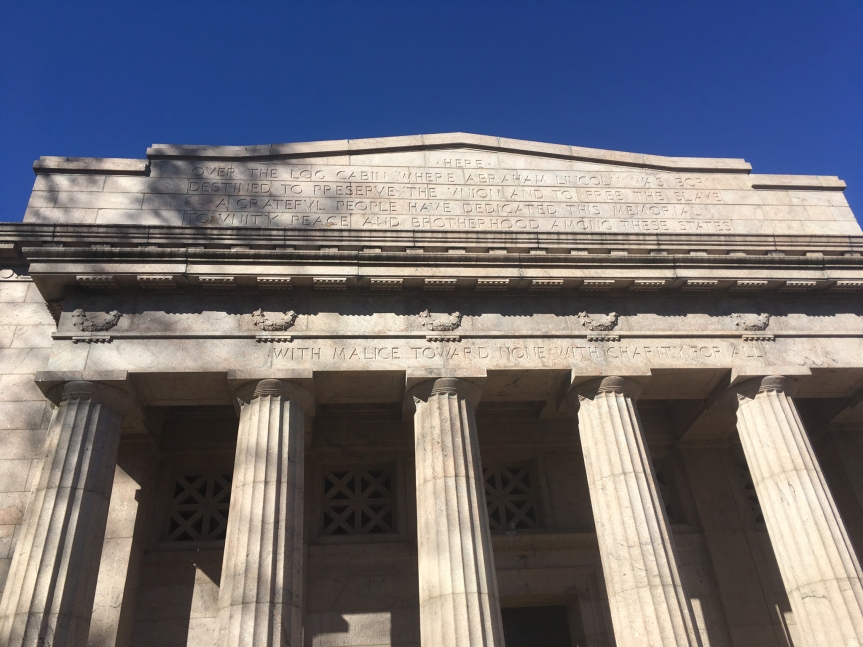 And when you got inside (according to my FB notes from that day) there was movie about Lincoln and his life, whose over-riding message was that “acceptance and inclusion are what makes America great”… something that had sounded particularly jarring to me at the time. (Keep in mind that Donald Trump beaten Hillary in the election for President JUST four days before, and I was in the state of Kentucky, a former slave state that had declared neutrality at the start of the Civil war, and where pro-Trump stickers and posters were common place — he won the state by 62.54%, and on that day every racist red neck in the state was still in a state of euphoria over the win).

There was a nice bronze of Lincoln’s family, when he was a tiny baby (having just been born of course)

And then inside this huge structure stood what the staff member (I remember this person was particularly grumpy) told me and the other visitors was a reminder of the original house. We were like all amazed that it was the actual house and he was like, “No, it’s just a replica.”

So, while from the outside it’s a very nice looking building (there was a slab on the side of the building that gives you some of the history of the place… something about the whole thing had my hackles up… could a state that had just gone overwhelmingly Trump have actually put up a monument to Lincoln?

According to this plaque on the outside of the building I still couldn’t be sure. It says that the memorial was built with funds raised by the Lincoln Farm association, the Cornerstone was laid by President Roosevelt in 1909, and it was dedicated by President Taft in 1911

However, now that I’m researching all of this I have learned that, the Association was founded in 1906 specifically to save this location, was headquartered in New York (NOT Kentucky) and included such notables as Samuel Clemens (aka, Mark Twain), Ida M. Tarbell, Robert Collier and Richard Lloyd Jones

According to Wikipedia: “From 1903 until 1911, he was a writer and associate editor for Collier’s Weekly, working under the publisher Robert J. Collier.[1] In 1905, Robert Collier and Jones collaborated to buy the old Abraham Lincoln farm at auction in Hodgenville, Kentucky. Then they organized a fundraising campaign to establish a historic site, which was opened during the Lincoln Centennial in 1909. The first board of trustees for the site included Jones, Jenkin Lloyd Jones [his dad], Mark Twain, William Jennings Bryan and President William H. Taft.[1]

So in other words, No, this memorial was NOT built by the state of Kentucky or even anyone who lived here.

According to both the staff member and Wikipedia the log cabin is NOT the original, but according to this site it was — or at least the guys who bought the building thought it was. Doing more research I found this site which sort of explains the confusion.

Apparently, in 1894 a speculator by the name of A.W. Dennett bought the farm where Lincoln had been born thinking people would want to see it, and had deconstructed a two-story log cabin found on a different part of the property, and moved its logs over to the spot where the original farm was thought to have stood (the original building had long ago been disassembled and he just assumed that this Lincoln cabin had been built using those logs). He then opened the spot for business, only no one came — because, no one was interested enough to shelp to rural Kentucky… So, as the saying goes, if you can’t bring Mohammed to the Mountain…. and at one point he added the logs from the cabin that was supposed to have been the childhood home of Jefferson Davis, the President of the Confederacy. But, with all the building and taking-apart and moving around, the Davis logs and the Lincoln logs got mixed up… so that by the time the Lincoln Farm Association got around to buying the land and the logs back from Dennett, it was anybody’s guess (by historical standards) which if any of the logs were from the original house, when they ‘rebuilt the house’ in Hodgenville.

So, all that said, back to the site…  At the bottom of the hill where the memorial to Lincoln’s childhood home sits, on what is known to have been the location of said home is a spring, which is still there….

And worth walking down to…

Also, out by the parking lot, there is something actually pretty cool. It is a metal copy of the memorial specifically designed to allow blind people to see the memorial. Keep in mind blind people see by using the sense of touch…  Cool right? I seriously wonder why I haven’t seen more of these around the country. This would be my first.