This is one of those historic oddities that make for a nice pit stop during a long drive. It is quite literally a grave that is located in the middle of a side road that led off to some very pretty farm land.

Among the sources I used when planning my trips, there’s a web-page/iPhone app resource that I use, called Roadtrippers.com where you can load in your destinations, and the application/web site will pop up a list of all the various things you might want to consider stopping at along the way (in its “oddities” category, which I love). You chose the ones you want, and then on your iPhone you load the list… HOWEVER, I have also found that the addresses appended to those locations are NOT always correct, so it’s best to then double check them with google. (For instance, the next day I went to the Louisville Slugger museum, and got misdirected to a residential neighborhood in seemed to be the worst part of Louisville, although based on the myriad of signs it was also the neighborhood where Muhammad Ali, formerly known as Cassius Clay, had been born.) This time however the address was true, and my GPS device in my car led me to it no problems, only the whole look of the place had changed.

Previously, as evidenced by some of the videos and photos I found, there had been an actual grave that stood above the road level

And above the grave there was a fancy marker sign that had read:

[and then in much smaller type]
Erected in 1982, by Kenneth F. Blackwell
Great, great grandson [of Doty?], and his son
Richard Blackwell

However, as evidenced by my photos, by the time I got there this had all been bull dozed flat (including the marker), and replaced by a far less interesting grave-marker embedded into a concrete lane divider — which granted, is arguably far more practical for the locals who drive by the place daily:

To my pleasure, however, I also discovered that the grave-site was a pokestop (I’m currently obsessed with Pokémon go), and it was the photo for that (another reason I love this game) that first allowed me to see the now missing sign and learn a bit more about how the surrounding cemetery had been moved.

NONE of this information was now available at the site!!!!!! 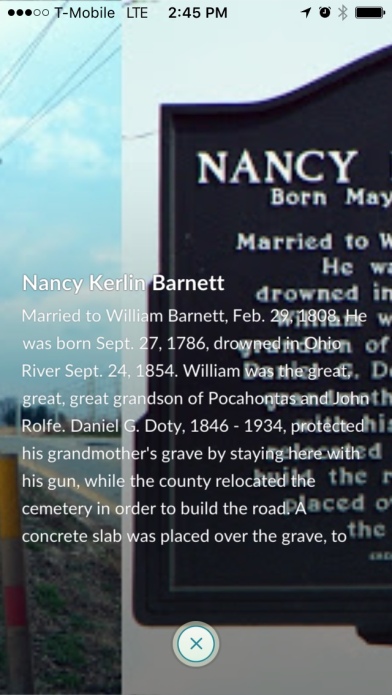 While I was sitting there, playing the game on my smartphone, figuring out where and wanted to go next, and reserving myself a hotel room for the night — God BLESS smartphones, anyone remember the hassle of tripdix from AAA back when they were printouts? —  a local guy in a pickup truck drove by me, stopped, and said he was concerned that maybe I needed help. He seemed highly amused that ANYONE would be interested enough in the site to actually drive here intentionally — I honestly don’t think the county really considered the tourism possibilities when they restructured the area… there weren’t even any signs out on the main road leading to this location.

Later that night, when I had stopped for the night and started to write this blog post I was able to pull up more information about the site, such as how the site had been restored to meet current traffic needs

To some disturbing things they discovered when the archeologists from the local University had finished investigating it (they got WAY more than they were bargaining for … literally).

In fact, keeping in mind the story that the Daniel G. Doty had protected the grave with a shot gun, and refused to allow them to move it, you have got to wonder if maybe the family had previously committed some murders, and hidden the bodies in grandma’s grave… and he knew that, and THAT was why he was so crazy adamant about not allowing the body to moved.