Fort Rodd Hill, Because militaries have to spend money defending strategic locations, even when they are highly unlikely to ever being attacked; the movie presentation takes some sort of pride in the fact that other than for training purposes, a single shot was never made from this facility.

I’m currently staying on Vancouver Island, BC, Canada. I came here mostly because it’s the hometown of a former officemate of mine from when I taught in S. Korea, and she’s returned home. I’m not staying at her home for a variety of reasons, the most important of which is she has three cats and two dogs, and I’m allergic to both. Instead I found an Airbnb rental near her in a neighborhood called Shwanigan Lake, one with a spare bed for visiting friends.

Shwanigan lake, BC was advertised as a resort mountain lake town, but the reality of the place came no where near to meeting the excitement those words conjured in my mind’s eye; for instance, the town area has two restaurants (one Japanese place that no one EVER goes to, the other is a pretty tasty fish and chips shop with maybe four tables), a fairly decent but not impressive non-chain coffeehouse/bakery, a Subways Subs, a Sarpino’s (that cheap chain you rarely see outside of a mall), a gas station and a Korean owned connivence store that also makes sushi to order. The homes are either falling down shacks, or decent looking middle class homes. There are no mountains to be seen, just hills, and the lake is fairly dinky in size. Basically, if it’s a resort mountain lake town, it’s a working class one. This basically means I’ve been getting a bit bored, but HAVE managed to catch up on a bunch of back-dated blog posts that I didn’t have time (or was too tired) to write while actually on the road.

As I was looking for ‘things to do’ in the area for my friend Louise and I, and came across an activity called, “Women on the Home Front at Fort Rodd Hill 2016”

“Discover how women of the Second World War contributed to our victory. Join costumed re-enactors and Parks Canada staff during this four-day event at Fort Rodd Hill National Historic Site. Step back in time to honour women of the second world war and learn about the important contributions they made on the home front.

Saturday June 18 at 11am – Learn to knit:  First 20 participants get needles and wool. Everyone will receive free historic patterns and knitting help.

Sounds good right? I thought so as you know I’m in to History, and in case you missed it (the book I’m currently reading is listed off to the right), I had just recently finished reading the social history book Home Fires: The Story of the Women’s Institute in the Second World War, which originally went by the title of Jambusters: The Women’s Institute at War 1939-1945, but got renamed to match name of the PBS drama series that was based on the book. Also, my friend Louise is very into feminist issues (she’s a professor of Human Resources -HR – and has written a load of papers on how women get screwed over repeatedly in the work place, especially in S. Korea) so I thought she’d be excited to see it, and she was.

I made a point of calling the Forte well in advance to verify what the web site had said, and they confirmed that it was going to begin on Thursday the 16th and run through Sunday the 19th (I actually found TWO web sites with the same information). Since my friend Tom was going to be coming in for a visit via the Victoria Clipper (a passenger only ferry) from Seattle, WA on the 17th, and would stay through the 19th, I figured our best bet was to go the 16th — as Tom being male might be less into the whole feminist thing. Then, the morning of the 16th I had posted to facebook that the plan for the day was to go to that event, and Louise posted a third link to it, one I had not until then seen, which said it was on the 17th through the 19th, and NOT on the 16th. This got me worried.

Neurotic female that I am, I started calling the Forte to get confirmation, was it or was it not happening today, Thursday the 16th.… and every time I called (and it was repeatedly, and incessantly) I got a recorded message; I called my friend to tell her my concern, and she called and got a human who said they were setting up, but events wouldn’t really get started till tomorrow the 17th, when my other friend was arriving…. OK then, not great news… after a few more tries myself, I finally got a human who confirmed that in spite of TWO websites saying it, they were NOT REALLY starting yet; that there were some exhibits currently being set up but that no one would be around to interpret them and we should come on Friday or Saturday, and that NOT on Sunday, because that was the day they’d be taking everything down. So I called Tom and asked him if he’d be interested in seeing this thing tomorrow after I picked him up from the Ferry, and he said he would… so problem solved, Louise agreed that rather than driving in together, she would meet us there, and then we’d each go our own way afterwards.

When we got to the event, it was a sort of massively underwhelming, mostly because there was in essence NOTHING set up the related to the female experience in the war (we didn’t stick around to have our hair done).

What there was, was a guy showing us how to make barrels by hand (not sure what if anything that had to do with the topic) 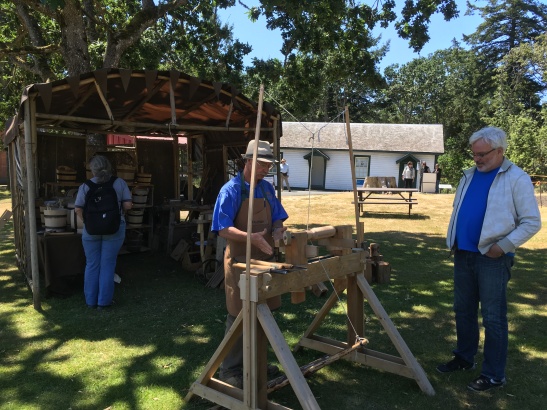 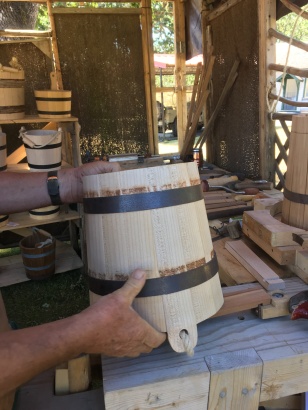 And there were two guys who Tom and I both decided were just a little bit to fascinated with Russia, talking about Ukrainian troops who fought during WWII (he was less than happy when he discovered that both Tom and I were fully aware that the Ukrainians had not only backed the Nazi’s in that war, but were down right enthusiastic about sending their Jews to extermination camps), and a younger guy who looked to be his son talking about the Russians who fought in Afghanistan, and how they explained why Russians love Putin (again, one of men on my list of people that I love, has been, on and off, in what he refers to as ‘Fuckupistan’ ever since the 1980’s Russian incursion, first as a freelance photographer and later working for the UN when the US invaded, and as such I was a lot more ‘well-informed’ than this guy was comfortable with).

The closest thing to the topic was a woman who had set up a small exhibition of the post cards and things her great Uncle had sent home to grandmother (his sister) from his experiences in Europe during the war. These were kind of interesting. Some of them were hand-made needlepoint post cards made by Belgian women as something to sell to Allied soldiers. The most impressive cards he sent however were images of destruction. Apparently the Nazis would create these postcards of Allied destruction of the Fatherland as a way to motivate the troop. Then,when Allied soldiers picked the pockets of fallen German soldiers — uhg — they considered these to be a prize find, and would send them home as evidence of the progress they were making (sort of a disturbing win win if you think about it).  However, again, her exhibition was far more about her uncle’s experience in the war, than her grandmother’s.

So by attending this event we discovered very little “regarding how women of the Second World War contributed to our victory” as promised. And the only costumed re-enactors were talking about men’s experiences. We did however get to see the normal presentations by the park, and of course the permanent buildings:

I hate to say it, but I think this might be a Canadian cultural thing — although I don’t have enough info yet to confirm the theory. My friend Tom and I talked about it afterwards, and he said that while Canadians are amazingly polite, and disconcertingly nice, they also have a reputation — which I’d not heard of — to be a bit apathetic about things (my friend Louise is the opposite, she’s obsessed with fighting for causes). He said that you just don’t see the attention to detail professionalism that you’d expect in the states, which would explain why 2 of 3 web sites were wrong, and when we got to the event it was not at all what was advertised.