Back on September 22, a day before I was supposed to leave to go to Reykjavík in Iceland I fell down and went boom on the streets of London, yet again!  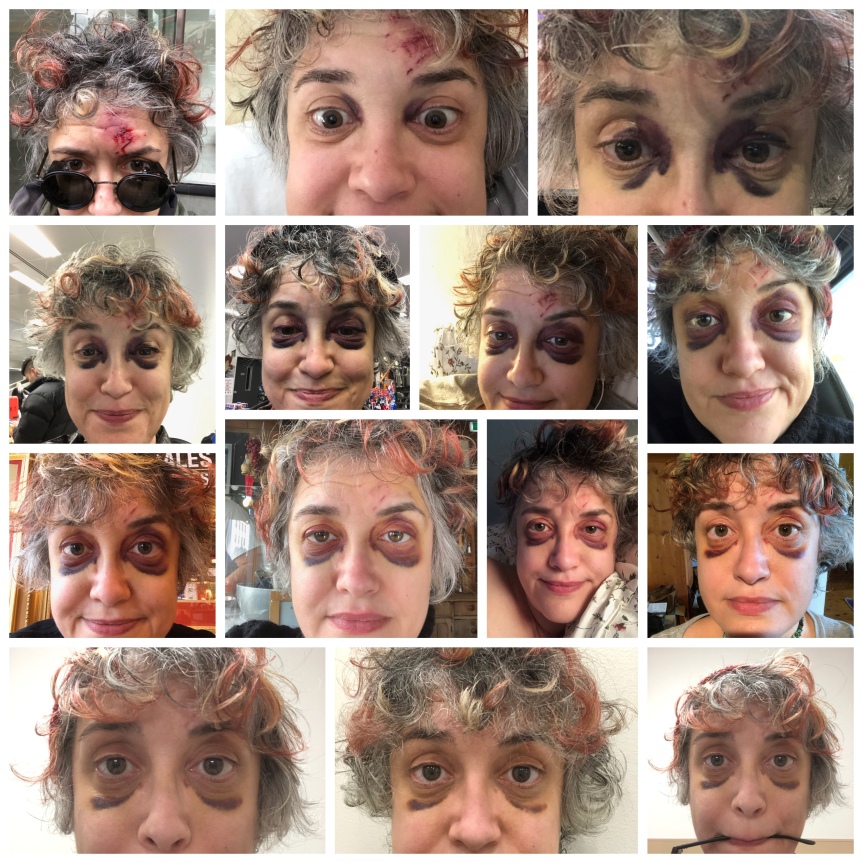  At the time I was staying in the Kensington neighborhood directly adjacent to Harrods (a world famous department store, now owned by the family of the guy that Princess Diana was in the car with when she died)   and had been spending the morning walking around and exploring the museum district where the Victoria and Albert Museum is, while listening to an audible recording of a book . Yes I was very distracted and putting a lot of stress on my brain, which was still dealing with post concussive syndrome .   I had already become aware of the fact that I was starting to mentally fatigue and had contemplated staying in place and finding a cab to take me home , but had rejected the notion  thinking I shouldn’t be such a ninny, my body was still fine and I needed the exercise. 

Suffice it to say that was the wrong decision.

One of the problems I’ve had ever since the major concussion (back in Australia about two years ago) is that when I start to tire the balls of my feet  begin to drag.   this is a problem that I’m still dealing with today. Initially they had been doing it all the time, so that it felt like the sidewalk was reaching up to grab my feet as I walked; but after identifying the problem and  some self implemented physical therapy — who knew that my childhood ballet lessons would ever serve some sort of practical use  in adulthood   ; I basically made a practice (for a few months) of focusing my attention on what my feet were doing, and that solved the problem by 95%.  That said, anytime my brain starts to fatigue my feet go right back to dragging.

Anyway I suddenly caught my foot on a not completely level piece of sidewalk, tripped and started to fall … But I guess because I was mentally fatigued  my hands didn’t do what they’re supposed to do, which is to Jut-out in front of me to break the impact and keep my head from hitting the ground . As a result I landed pretty much square on my forehead. 

 The picture in the upper left-hand corner is what I looked like shortly after hitting the ground. I lay there immobile in a state of shock , but some very nice girls whose names I didn’t get stopped and helped me. Once they gotten me up off the ground they escorted me down the street to a local pharmacy which turned out to not be a real pharmacy. They then took me from there even further down the street to a branch of the Boots pharmacy chain ,  where there was a minute clinic type set up .  

The pharmacist was busy talking to some other customers when I waddled up and asked for help, with blood trickling down my face . First she said “please stand in line and wait your turn.” , and then looked up at me and said, “apparently you take priority!” The people she’s been talking to were not particularly thrilled with this until they turned around and took one look at me and agreed that in fact I did.   She took me into the clinic area and cleaned up my forehead and put a bandage on it and then took me out to the street and put me into a cab and directed it towards the nearest hospital with an emergency room , namely the Chelsea and Westminster hospital. 

I then got to experience yet another example of how by comparison to other industrialized countries  the US health system is seriously fucked up. I went into the waiting room, had to wait for more serious patients to go ahead of me – – keep in mind my forehead had already been cleaned up and bandaged by the woman at the pharmacy. When they finally saw me — The room has been pretty full when I arrived and I had a wait of maybe an hour , they cleaned my wond  up a little bit more and put surgical super glue over the cuts to help them heal (and keep more blood from escaping– as we all know head wounds are heavy bleeder’s) .    when I asked how much it was going to cost me, this visit to the emergency room … keep in mind that in the United States if I even step foot into an emergency room I am hit with a bill for $1000, and that’s before seeing the doctor   . When I was in Australia they charged me $134 to walk into the room, $134 to see the doctor, $134 for the CAT scan, etc.… So at the very least I was expecting some sort of fee of a few hundred dollars. To my shock and awe they informed me I owed them NOTHING!!! 

The second picture on the upper left top row is what I look like when I woke up the next morning. The day started out with a small black eye swelling in my inner tear ducts adjacent to my nose, and progressed rapidly over the course of the day, most of which was spent at the airport or on a plane heading to Reykjavík. The third picture starting from the left in the second row is what I look like the next morning waking up in Reykjavík, and from that point on every photograph was taken once a day over the ensuing days. By the time I left Reykjavík the bottom right picture all I had left were lines that made me look like a football player.

What was kind of funny is that in spite of the fact that my eyes were deep purple almost nobody said anything to me about them, other than my best friend who flew in from Chicago to spend that week with me. There was one exception, one elderly man who I met in the waiting area for the flight to Reykjavík said to me, “I have a bet with my wife, she thinks you’re just doing some sort of weird make up thing, but I said that you had fallen and hit your forehead and that you have black eyes as a result.” Apparently the same thing that happened to him as a kid.

What I was most impressed by, and my Best friend  felt the same, was just how impressively balanced the swelling was. It really did look like eyeshadow I had applied to my eyes, So I can’t fault people for thinking that that was what it was.