To paraphrase my friend who stayed with me for part of this trip, while people may come to Iceland wanting to see all the gorgeous geography, for those of us from more southern climates, what we are most hoping to see is the dancing lights of the Aurora (green lights) Borealis (Northern). In this post I’m sharing what I learned about your options for seeing them, if you’re based in Reykjavík. Firstly, unless you have a proper camera and tripod, you’re going to want to look on line for an app that tricks your smartphone’s camera into taking long exposure photos (I used an app called NorthernLights) unless you own one of the newest phones that already have that function built into them. And then you’re going to want to find a way to get away from the light pollution of Reykjavík at night — if you can’t see most of the night stars, you won’t be able to appreciate the Northern lights.

Over the course of my one week stay I went on two different $100 tours to try to see the lights. The first time, my first night in Iceland, was a total bust. This was partially because of partly cloudy skies — the nights before and after all the northern lights tours were cancelled because of rain. But also, and almost more importantly, because there was in fact barely anything to see that night — even if the skies had been clear. No dancing light, no brilliant green stripes. At best all the sun was offering up that night was a bit of light green haze that just lightly lit up part of the northern sky… it was there (enough that the tour company felt no necessity to follow up on their guarantee or a 2nd trip or a full refund if it had not been), but realistically it really wasn’t what anyone would have flown all the way to Iceland in hopes of seeing.

In fact, the high price tag we’d paid felt a bit like a rip off. When initially researching the prices for these tours, the prices kind of boggled my mind and initially I’d contemplated that it might just be cheaper to just hail a taxi and ask him to take us someplace dark… but in reality, as the week progressed, and after discovering just how insanely expensive taxis are in Iceland, the $100 round trip on a minibus seemed like a bargain. There’s nothing like Uber or Lyft in Iceland (i.e., more affordable taxis), so your choices are rent a car, take a bus tour (of varying sizes), or hire a taxi — which could easily run you $250 or a lot more by the time you’re done.

The group shot above was taken of the 17 of us in the minibus on my first trip. I’m posting it as proof that the problem had not been because I was trying to take pictures of the Aurora with my iPhone… that’s me in the front row in the green coat/red hat, my friend who flew up to see Iceland with me is standing next to me wearing the purple coat and scarf … This shot was taken by the tour guide using his TOP of the line camera with a fancy lens, on a tripod, using a long exposure and with about 2 seconds of bright fill lighting flashed at us … see those slightly lit up patches on the right side of the image … seriously, that’s IT! That’s all we got that night. The Driver did his best and went to about 3 different locations, drove us around for about a full hour there and back — headed towards the middle of the island on the Golden Circle road, and we got to see lots of stars as he dogged the cloud cover, but mother nature just wasn’t helping him out with regards to the Aurora lights.

This is why, pretty much EVERY Northern lights tour you sign up for will start with a very LONG and detailed apology from the guide. This includes a lot of trying to explain scientific realities as to why you might not see anything that night and it’s not their fault. Be prepared for the fact that your fellow tourists may or may not grasp said science, and that they’ll end up wasting precious time asking questions that the guide has already explained, but they just didn’t grok it; the smaller the group, the less time wasted on said questions being one of the benefits of not taking a big bus. In fact I think half the job of the tour guide is to … if you get a night like we did that first night … make a really big deal about ANY Northern lights, no matter how pathetic, that might show up that night, just so that the company doesn’t have to take you out a 2nd time as promised in their guarantees.

As such, be prepared for the reality that you MIGHT have to go out more than once during your trip before you see anything. There is a cheaper $40 option, which means taking a huge passenger bus along with 120 other people. The major difference between opting for a minibus (20 passengers) over a full sized one (other than the aforementioned time wasted on explaining science to folks who have difficulty grasping it) seems to be that smaller vehicles are allowed to take dirt roads and take advantage of small concrete parking areas (big enough for about 2 cars max) that the Icelandic government has created for tourists on the sides of the roads. It’s important to remember that in Iceland the ring road wasn’t completed until the early 1970’s and even the ‘heavily’ traveled highway from Reykjavík to the international airport in Keflavík is only ONE lane in each direction… and not even a very wide single lane. AND NONE of these roads have large shoulders built into them to allow for pulling safety to the side. According to one of our tour guides, who spent a lot of time explaining how to drive safely in Iceland to us (while he was driving), the roads are so narrow that if a tourist stops anywhere other than one of these designated areas, trucks might just barrel through and run them off the road — and under the law, its the fault of the person who parked so as to partially block the road.

The big busses (clearly) can NOT take advantage of either dirt roads, or the tiny concrete lots on the sides or roads, and are by necessity relegated to taking you ONLY to locations that have big parking lots AND are out in the middle of nothing… of which there’s only a few within an easy drive of Reykjavík. If the sky is clear of clouds and the solar winds strong enough, the reality is that it doesn’t matter which option you take, you’ll see the show. HOWEVER, if that’s not the case — and the sky in Iceland is rarely clear of cloud cover, the smaller the vehicle you book the better the chance they can find a legal place to park that is both away from any light sources and where there’s a lot of visible stars, i.e., the best place to see the lights. 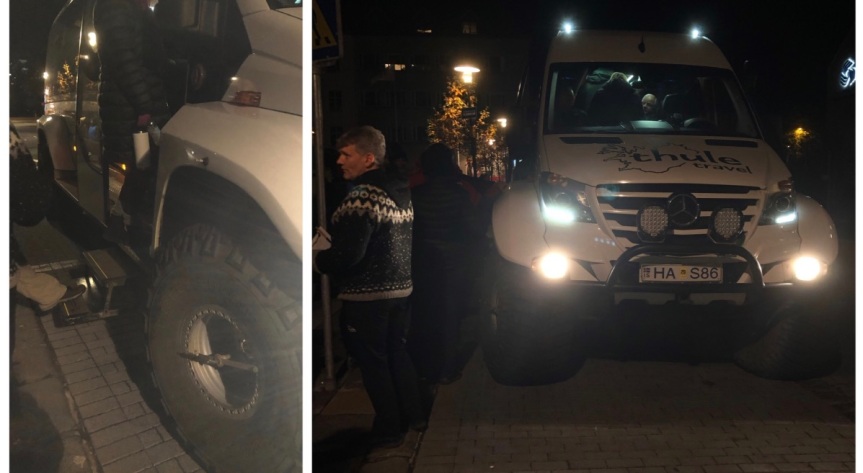 That said, while we were waiting for our tour (the first one) this Minibus showed up, which was unlike any other we saw. It’s big wheels, and stood much higher than normal, and clearly was designed for off road travel. For myself, while I could see wanting one of these for a daytime tour, but I’m seriously doubting that the extra expense (I’m guessing it cost a lot more than our ~$100 per person), was going to be worth it… for all the reasons previously discussed.

The first time we went out (my friend and I together) was on the first night of our trip, a Monday night, and like I said … nothing. My friend didn’t stay as long as I did, and left on Friday at around noon. By that evening I found myself to be SO exhausted by the previous three days of tourism that I pretty much collapsed into my bed at around 3pm and couldn’t even go to get food. I survived on what was left in our fridge, some Icelandic yogurts (called Skyr — similar to greek yogurt, but with a milder flavor), and smoked lamb and traditional bread that had been gifted to us by our Airbnb host.

The next morning as I was touring around town, I kept hearing everyone raving about how intense the northern lights had been the night before, that the sky had been cloudless for the first time all week, and how the event had been so intense due to a massive solar storm, that you could have seen it from town if you just walked over to the bay and looked North. Let’s just say I was kicking myself. I went right back to my room and tried to book a tour for that night, but the company I had used the first night was fully booked, as were the next two companies I tried. So I got an idea and walked over the Aurora center (a museum near my rental, where you can see a fake Northern lights display and learn about the phenomena), and with the help of the staff found a ‘good’ (according to them) tour group that still had available seats for that night for about the same price I paid the first time.

With the 2nd tour, which was led by a company called “BusTravel Iceland” we got picked up, taken to a parking lot, and then transferred to a 2nd bus of the same size (???) — this group killed about an hour of my time for no purpose, which I was not happy about, before finally hitting the road to our destination. Because of how intense the light show was expected to be that night, they only took us on about 15 minutes away from town on the road southwest towards the airport, and then only about three minutes along a dirt road on to the adjacent lava field (so that the headlights of cars wouldn’t bother us). Once there, lets just say that not only did I get to see the massive green stripes I’d been dreaming of, but even dancing lights were seen, where the you can see the strips moving around. We even got to see multiple colors as the lights danced, with bits of purple and pink flickering along the edges (unfortunately this wasn’t something my camera could pick up).

[Time lapse video of the Northern lights found on Youtube]

Initially my camera was failing me and causing me a lot of frustration. It would initially work, but then after a shot or two would stop. There was an Indian woman in our group who’d read something about how the automatic night shift feature in the iPhone interfered with the app’s software, and when we went into settings and turned that off sure enough my phone started working well. I had to restart the app after changing the settings, but then it was working again and continued to … the light show kept coming and going for about a half hour, and then stopped… we waited a bit just to be sure it was done… and then the driver said they probably wouldn’t be back till about 4am 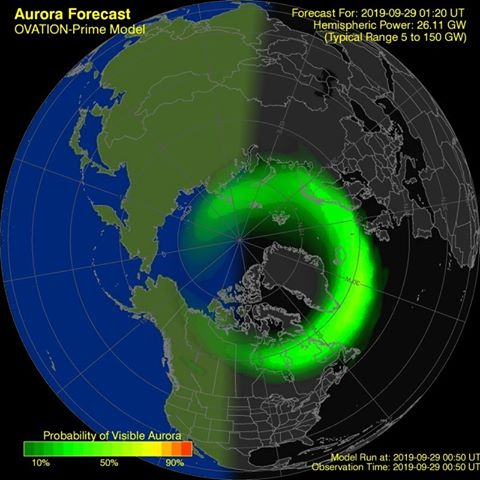 The next morning my friends who work in the computer industry were all complaining about the interference from the solar storm, and one of them posted this image, which shows what I’d been watching the night before.