If you’re passing through Paeroa, while road tripping New Zealand (NZ) — let’s face it you’re most likely on the way to some place else — you WILL be seeing these two “Big Things”, i.e., huge bottles with the letters L&P on them located at either end of town. They represent one of NZ’s national soft drinks, which is made in here, using the local water.

It is a super sweet lemony concoctin called L&P, short for Lemon — because it’s supposed to be a lemon tasting drink & Paeroa, the name given to the magnesium bicarbonate rich water of the springs located here. That said, the brand is no longer made here… it got bought out by Coke years back and is bottled up in Auckland …. although I’m not sure how many Kiwi’s know this.

The bottle above, located in front of the L&P cafe, is one of two such bottles in town. In the photo I’m pointing at the advertising slogan on a red banner across it’s front… which reads “World famous in New Zealand.” I thought that was pretty witty, but learned afterwards that, according to Wikipedia, it was so successful that it has become a popular saying in New Zealand.

At first I assumed the one in front of the cafe was the promosed “big bottle” but when we got there we were told that it was in fact the smaller one. The BIG one, is at the other end of town in a small park along the main road/highway…  Although, that said, if you compare the one above with the one below, to me they looked to be about the same size, only the one in the park is standing on a pedestal 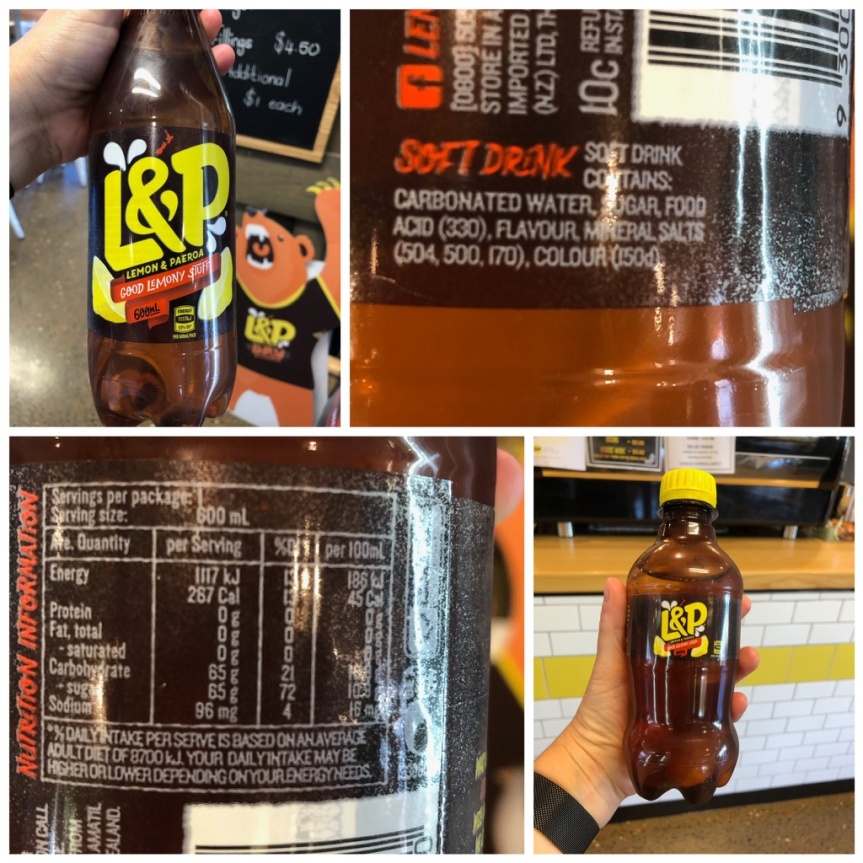 In case you’re completely unfamiliar with the product, L&P is a local to NZ brand of a lemony flavored soft drink… that in my personal opinion wasn’t very lemony, and actually tasted kind of fake … like some lab’s idea of lemon… And then of course I read the ingredients and…. its basically water, sugar, a lot of acid, and Citric acid (330). 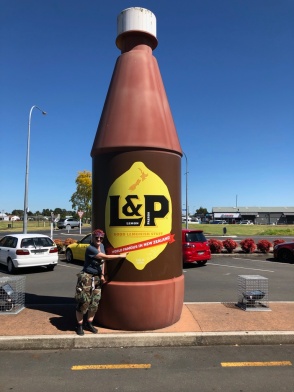 As I discussed at length in the article about my visit to Hobbiton, (the movie set where the Hobbit Shire for the Lord of the Rings Movies where shot) is that while New Zealand’s economy is ranked first in the entire world for its socially progressive policies, and has a reputation for being one of the cleanest and greenest among the First World/western block, high income, Organisation for Economic Co-operation and Development (OECD) countries….  the reality is that it is, ironically, also the most DEregulated government within that institution. 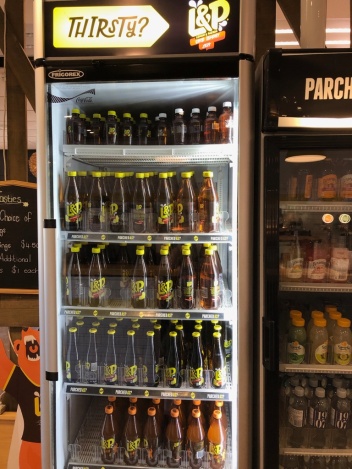 This is the result of the economic policies of Roger Douglas, who was NZ’s Minister of Finance back in 1984, as part of the country’s Fourth Labour Government (1984-1990). Known as Rogernomics, a hat-tilt to Ronald Reagan‘s  Reaganomics, he had instituted a set of neoliberal economic policies, the most important of which from the perspective of this piece, was an almost complete deregulation of NZ’s industries.

In day-to-day life, part of how this shows up for the average consumer is that in New Zealand, food labeling is DEVIOUS… so if you look at the close up of the bottle’s ingredients it says “food acid (330)” rather than “citric acid” … and ALL chemicals put into foods are like this… You know how in the states the general rule is if your reading the ingredients list and you can’t pronounce the ingredient you probably shouldn’t consume the product? Well in New Zealand ALL food additives are some easy to read words and a number code. 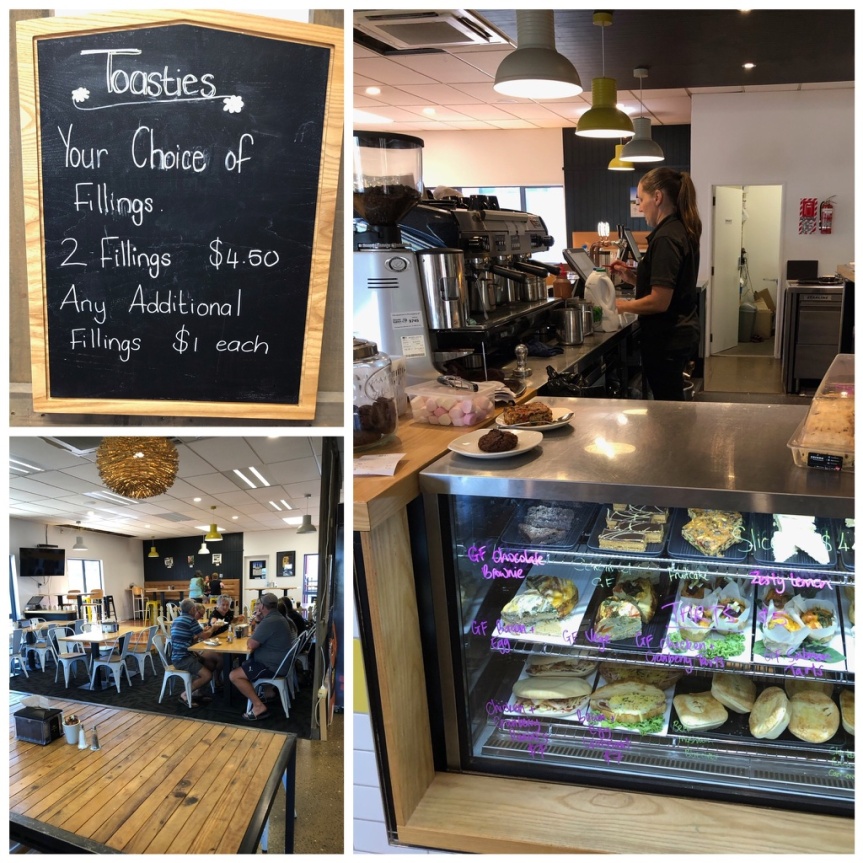 First my friend and I went to the L&P cafe location (which is the first one you’ll hit if driving south from Auckland to Wellington, and pit stopped long enough to try a bottle of the stuff and use the facilities. 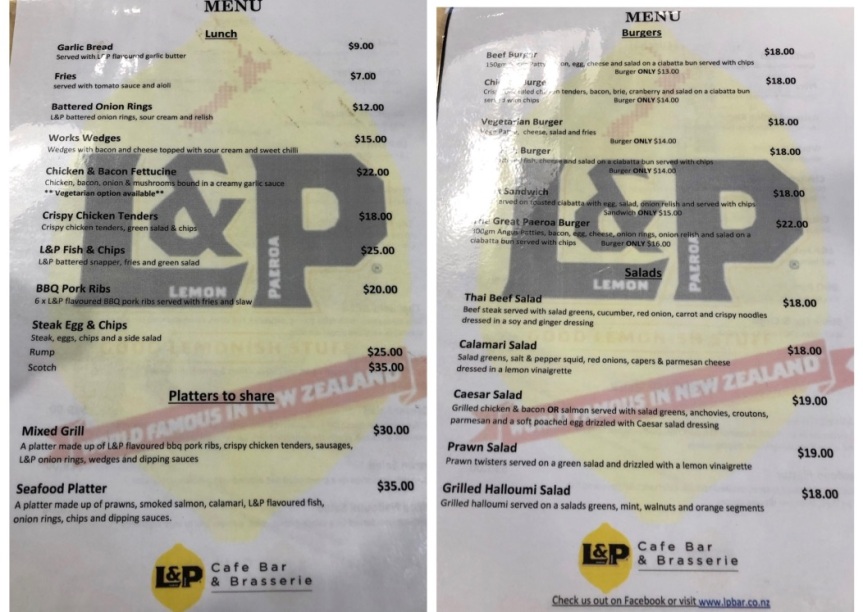 While the menu looked ok, I was actually holding out, if you can believe it, for a pit stop at the McDonald’s down the road. No, seriously! This was because along with happy meals in New Zealand’s McDs were giving out children’s books by Ronald Dahl (he of Charlie and the Chocolate Factory, which was renamed as Willy Wonka and the Chocolate Factory for the movie version) with the happy meals instead of toys 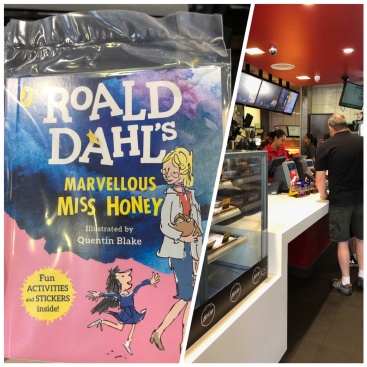 The book being given out was his story Matilda (which in the movie version is called Matilda), only given out one chapter at a time — so that the title of the chapter was the title of the book — but with no reference on the cover to the fact that it was part of the larger book called Matilda. But for the fact that I’m very familiar with the story (not just the movie) I would never have known… and I was hoping beyond hope that at least they were giving out a chapter a week, because ever McD’s I stopped at was handing out the same “Marvelous Miss Honey” mini book. 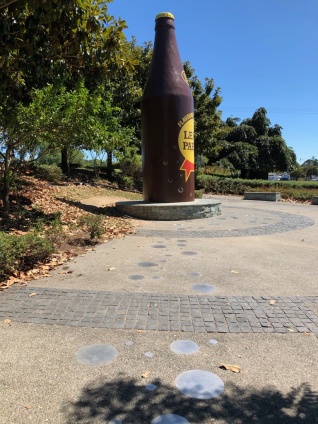 After this we stopped at the park at the other end of town where the “bigger” bottle was located. This one had little spots on the ground leading to it, which I’m guessing were supposed to be bubbles… which was kind of cute…. and a collection of signs talking about the history of the town 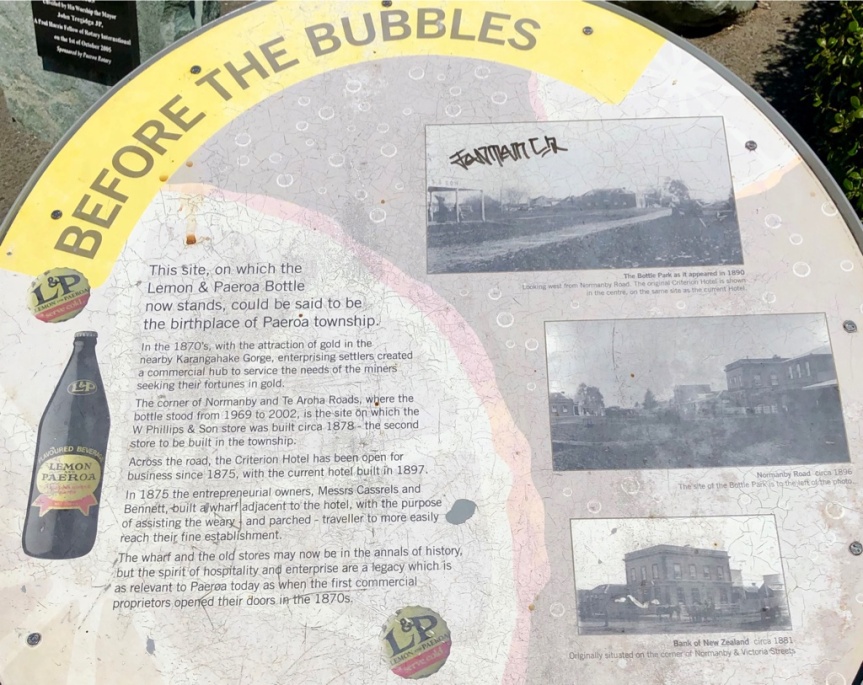 As well as the history of the product 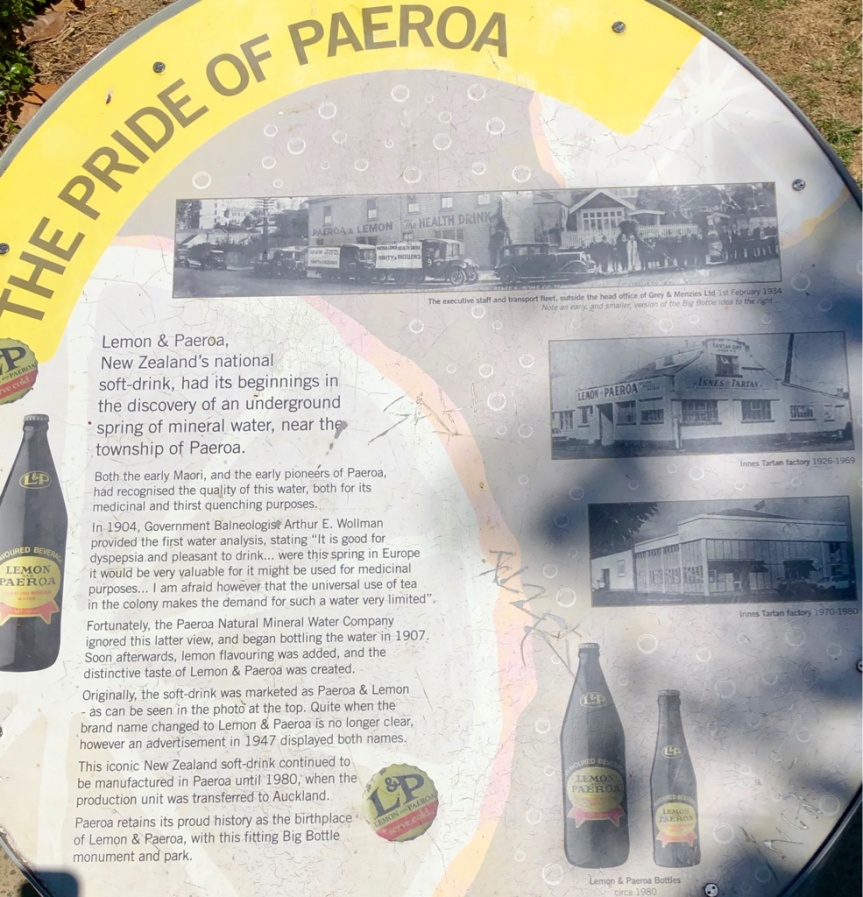 According to the sign above, the reason the drink was made in this town, and I guess was made part of the drink’s name, was because the water in the town is naturally effervescent…. hence the bubbles on the floor. 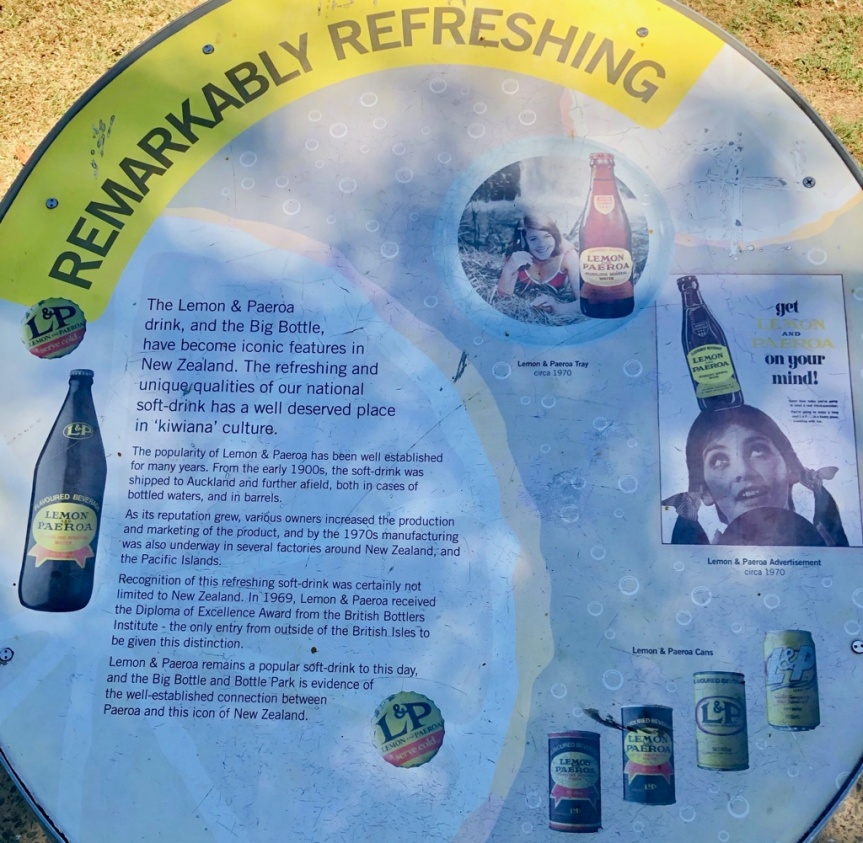 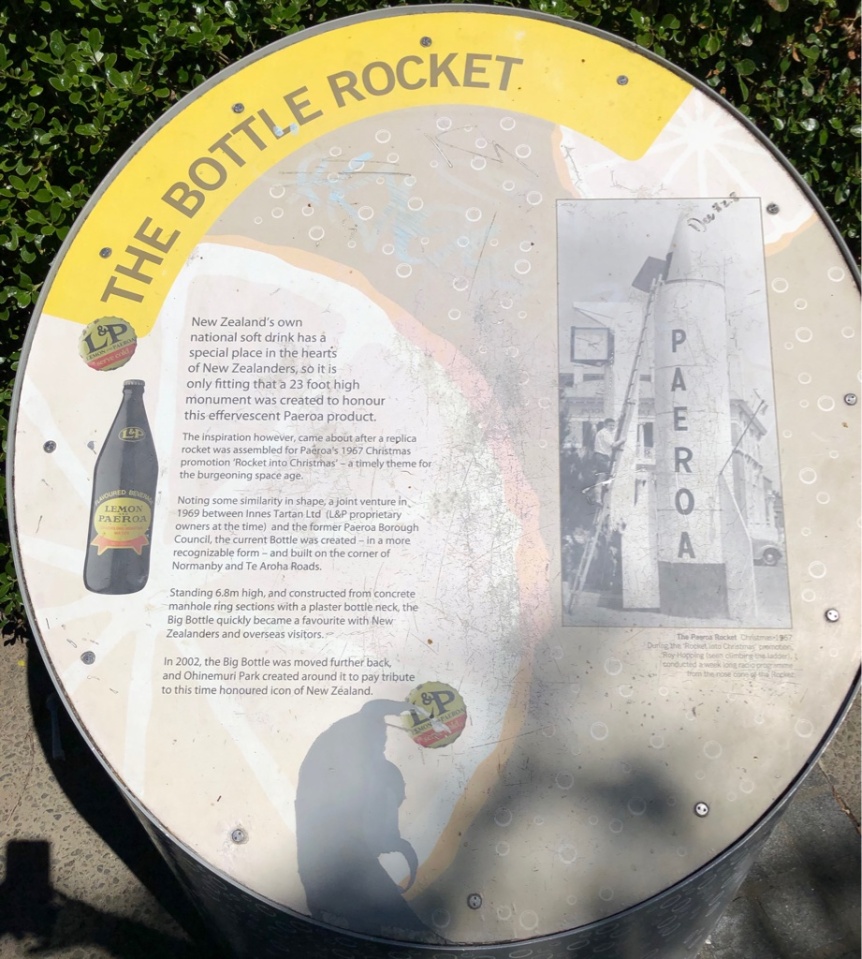 That said, we weren’t the only ones stopping to take a picture with the bottles… only these guy had the good sense to bring bottles of the stuff with them for when they posed in front of it. 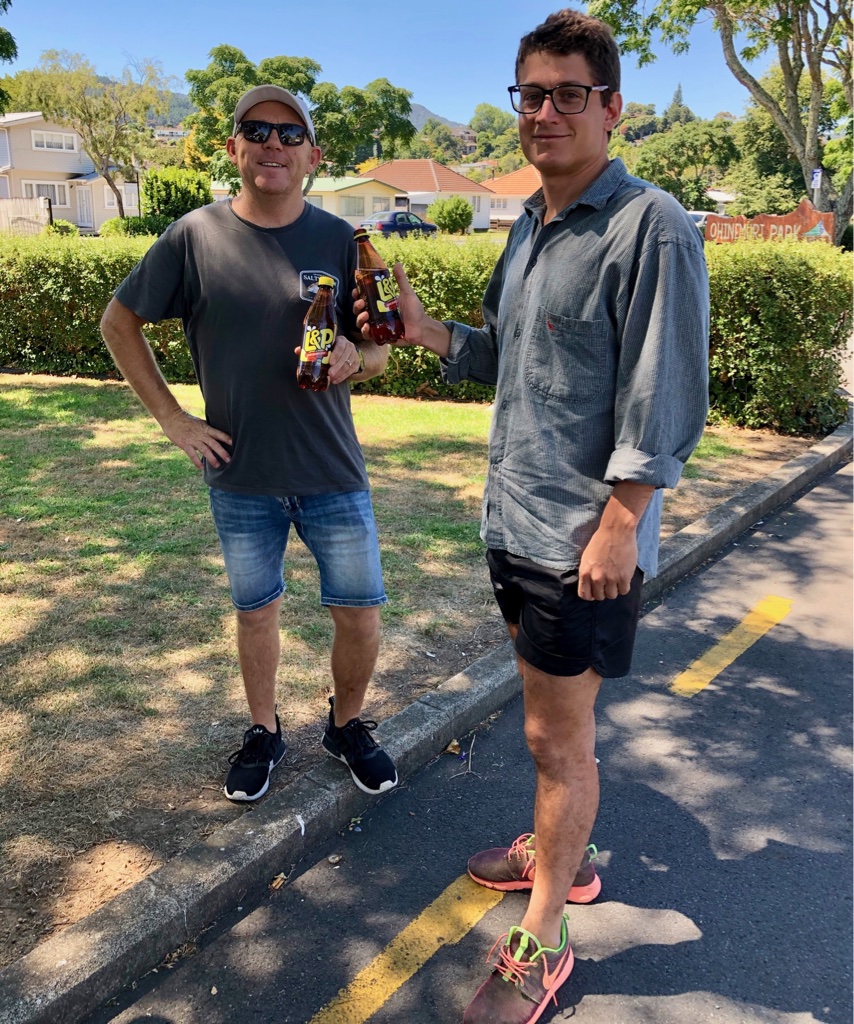 Location of the Bottle in front of the Cafe

Location of the Bottle in a small park