You’d THINK ‘women-only’ carriages would only happen in cultures like the Middle East, where the genders are kept separate, but you’d be wrong. In an effort to combat ASSHOLE men who think a crowded train is the perfect opportunity to put their hands up the skirt of any women unlucky enough to be standing next to them, various cities around the world have begun to institute “women only carriages” in their trains, including Tokyo. 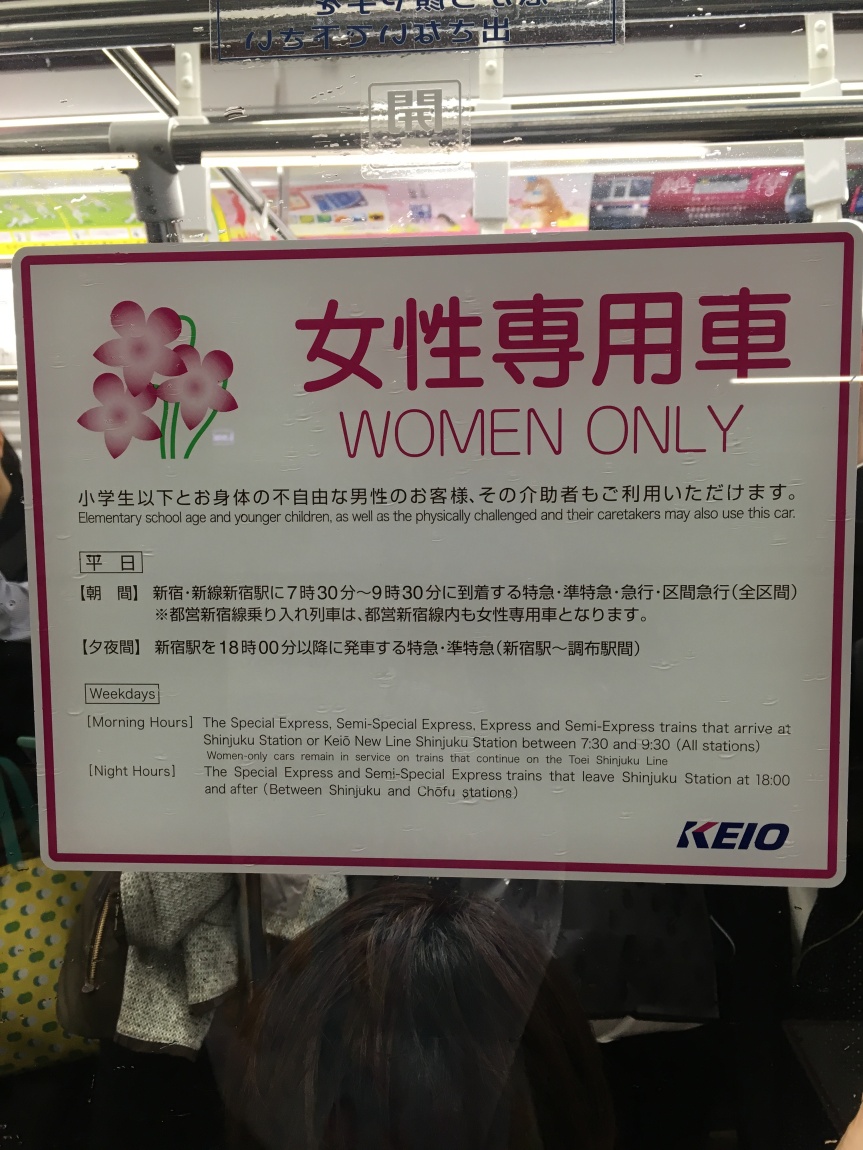 Today I spent best part of a miserable day (Tokyo was having a gale, i.e., a storm with very little rain but near constant 30 to 50 mph wind gusts) at Tokyo Disneyland (hey, a woman has got to have her priorities); and while heading back home to my airbnb had my first encounter with this phenomena.

Because of having to fight intense winds the whole day I was already exhausted, and the whole route (from the airbnb to Disney) takes a miserable 1.25+ hours — and includes a LOT of additional walking as you make changes between three different lines none of which are adjacent to the other (suffice it to say that I will NOT be staying in this location again)… By the time I reached the final leg I was EXHAUSTED, and I still had make a change from the Japan Rail (JR) Chūō line (which runs east to west) to the Keio which starts at Shinjuku Station, which runs to the “dormitory communities” (or commuter towns) west of Tokyo…. where I was living. When I finally got to the Keio platform, the train was sitting there with it’s doors open, but pretty much every car “looked full”.

Emphasis has to be given on the “looked” part, because … one of the “experiences” of being in Japan is riding in a TRUELY full train. Most Americans have never had the pleasure because it involves an invasion of personal space that unimaginable in the west. A full train in Tokyo is one where people have been crammed together like sardines to the point where you are cheek to jowl with your fellow passengers, and as the doors close the train staff can be seen shoving people in.

[Note: if you ever find yourself on a train like this, I STRONGLY suggest you take this suggestion, “go with the flow.” By that I mean, relax your entire body and pretend you’re laying down on a bed, and don’t freak out when you find your legs are no longer under your body. It’s a very Zen meditative sort of thing, like a trust fall or being held aloft in a mosh pit. IF you try to struggle to stand, a) you will fail, and b) you might actually get hurt — as in strain your back. At stations right before yours, maneuver yourself closer to the doors, especially if your needing out at the next station. When you station arrives and the train comes to stop, THEN you get your legs back under you and yell “SUMIMASEN!” at the top of your lungs repeatedly, and starting from a football stance put your shoulders into the person in front of you and shove the hoard blocking your exit out of the train. Once you’ve burst through their ‘defensive line,’ immediately turn around and face the startled masses, bow very deeply and hell out Sumimasen again, then leave.]

Back to my story… This was not THAT full, but it was still pretty darn full. I kept going down the line car by car trying to find one where there was enough space to step in without having to shove my way in (like I said before, this was the first station on the line so the train was just sitting there with its doors open). Finally, I found one, and bleary eyed and exhausted, I stepped in. Looking around I was like “wow there are a lot of women on this car.”  The doors remained open, and more women stepped on… And then I started to look around and really SEE and realized that I could not spot a single male on the car. Well that was odd, so I couldn’t be right… I keep looking and sure enough I could not spot even one man on the car.

Suddenly I had a brain fart and, in English, I loudly said “is this a woman’s only car?” One girl standing just by me, who spoke a tiny bit of English volunteered a quiet, “yes”, so then I asked her “how do you know which is the women’s only car?” and she kept saying “muzukashii, muzukashii” which in Japanese translates to literally to “difficult, difficult” but idiomatically has a much broader ‘unexpressed meaning’, or what the Japanese refer to as Haragei (a crucial concept to understanding the Japanese);, in this particular case it meant: “my English really isn’t good enough to be able to explain this to you and while I’m struggling to find the words I don’t know how to say it… and I am very both sorry and slightly embarrassed about that, so please forgive me.” In Japan it’s VERY important to belly as much as with your ears.

When I got off the train I looked all around until I spotted the identifier.

I had of course heard about women only trains, and had probably many months ago read something somewhere saying they were showing up in Japan, but it wasn’t something that was in my ‘awareness’ so to speak… to use proper English, it was not within my ken. (Great word, shame it’s not used more, it’s the closest thing in English to the full and proper meaning of the Japanese term, “Wakarimasu” — which is rather closer to the SciFi slang term “to Grok” than it is to the simple concept of to know.)

The need for women only cars in Japan however, WAS … I am sorry to say, very much within my ken. Back, 30+ odd years ago, when I was in my early 20’s I spent two successive summers living and interning in Japan. The first was in the tiny Japanese ceramics town of Arita, more precisely in Okawachiyama Village (and at the time there were only two other westerners in the whole place) working interning in the international business department of Iwao Jiki Kogyo; the second time was in Tokyo for one of the world’s largest pharmaceutical firms, Eisai. That summer I was riding on a perviously described “very full train” with wife of my father’s colleague, a professor from Todai, when an also previously described asshole made the mistake of taking advantage of me. My mamma didn’t raise no shrinking violets.

I felt an uninvited hand exploring my backside and then using it’s fingers to pull up my skirt. For about a split second I was in shock, but then I got pissed and slowly maneuvered my hand through the press of bodies around to my rear and grabbed the hand. I then proceeded to slowly turn my body around while holding firmly onto the hand (at that age I played piano, violin and viola, practicing each for at least 20 minutes a day… and was rather renowned among my friends for how strong my hands were). By the time I turned myself around, the hand had been twisted into a position that I was sure would be uncomfortable if not outright painful for the owner. I then looked among the faces in front of me, and found who I was pretty sure was the guy based on his expression of fear and pain… I then let go of his hand, pulled mine out, pointed right into his face and yelled  repeatedly “CHIKAN! CHIKAN!” … Japanese for molester, or sexual harasser. The people around us all looked at him in shock (tellingly, a lot of them were unhappy with me for disturbing Wa, or harmony — another term crucial to understanding Japanese culture) and when the train doors opened he ran out of the train with his tail firmly between his legs.

While the folks on the train weren’t thrilled with me, my companion, who was in her mid to late 30’s (I was in maybe 23? at the time) looked at me with pride and wonder. That said, she shuffled me off the train even though it wasn’t our stop (like I said, I had committed the then socially unforgivable sin of breaking Wa — read the description) — but now a days I hope Japanese might have grabbed him and held him for arrest, instead). And then once we were on the platform she said to me, “HOW did you do that! PLEASE teach me! That happens to me all the time on the train and I never know how to respond. That was WONDERFUL!!!”

I say that no a days I would expect the Japanese to respond differently because, as the presence of Women only cars indicate, times have changed. According to this web site, “The chikan problem is [now] taken very seriously by railway companies and the authorities, and anyone found guilty of groping is liable to imprisonment or a fine of up to 500,000 yen ($4,500).” But that said, according this other web site  (citing a 2008 study by Adam Burgess and Mitsutoshi Horii), “Somewhere between 50-70% of young Japanese women experience chikan (“pervert,” often “groper”) on Japanese commuter trains in metropolitan areas” and, according to the same site the reason Japan’s camera phones make a snapshot noise that the user can NOT turn off is to prevent sicko’s taking pictures up girl’s skirts.

According to yet another on-line article, Women who attract chikan, and women who don’t”: The illustrated guide that’s provoking debate, which was published in 2014… the problem of Chikan men is now being discussed openly in Japanese society…

By the way, THIS is the image in question…
And, looking at it, who do you think the artist identified as the easy target?

… according to the artist, in Japan, sexual attacks are more in line with the tastes of Pedofile priests than the sort of “she must have been asking for it” victim shaming we tend to see in the West. As such,, the woman with exposed breasts, or the Goth girl are the ones least likely to be attacked, while while the underage school girls or demurely dressed adult woman are statistically the ones MOST likely to be attacked.

“Suspects in sex crime cases were asked why they chose that person [to attack]. Fewer than 5 percent said they targeted someone because they were wearing provocative clothing. In rape cases, the most common reason given was ‘they seemed like they wouldn’t report it to the police’ (45%). In indecent assault cases, the most common reason was ‘they seemed meek; I didn’t think they’d be able to stop me’ (48%).” — from the article about the image

… returning to the trains, the good news, according to the wikipedia article on the subject of Women only cars on trains, is that in Japan, unlike some other countries, men are fined for entering the cars and the ever present rail staff (the ones whose job it is to shove people into cars) are on site to enforce the rules.