Yesterday a childhood friend and I had High tea at the National Cathedral in Washington D.C.; it was a very interesting tour with a tasty snack at the end. Unlike most high teas, the portions are just enough to satiate your hunger while leaving you more than enough room for dinner. 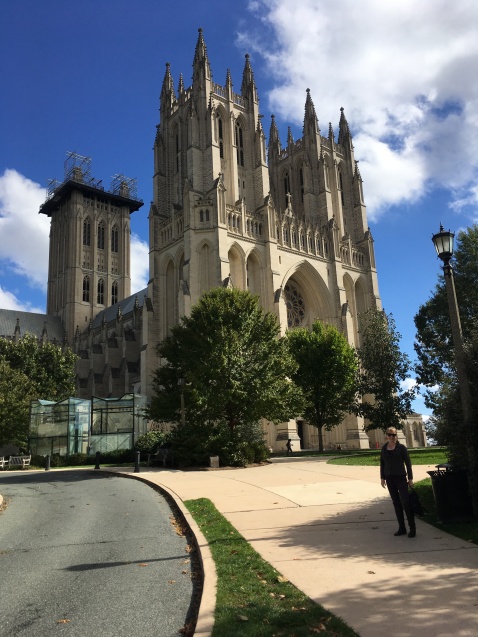 As is our ‘tradition’ whenever my friend Gina comes to town, we go to high tea. Last time I was in D.C., Cheryl, another childhood friend who lives in the general area, suggested that our BEST choice was this one at the National Cathedral — but seating is highly limited so that by the time Gina had finalized her travel dates they were already fully booked and we ended up at Lady Camellia’s in Georgetown instead. However, SINCE I was going to be coming back to D.C. again this week, I suggested to Cheryl that this time she and I should do it together. 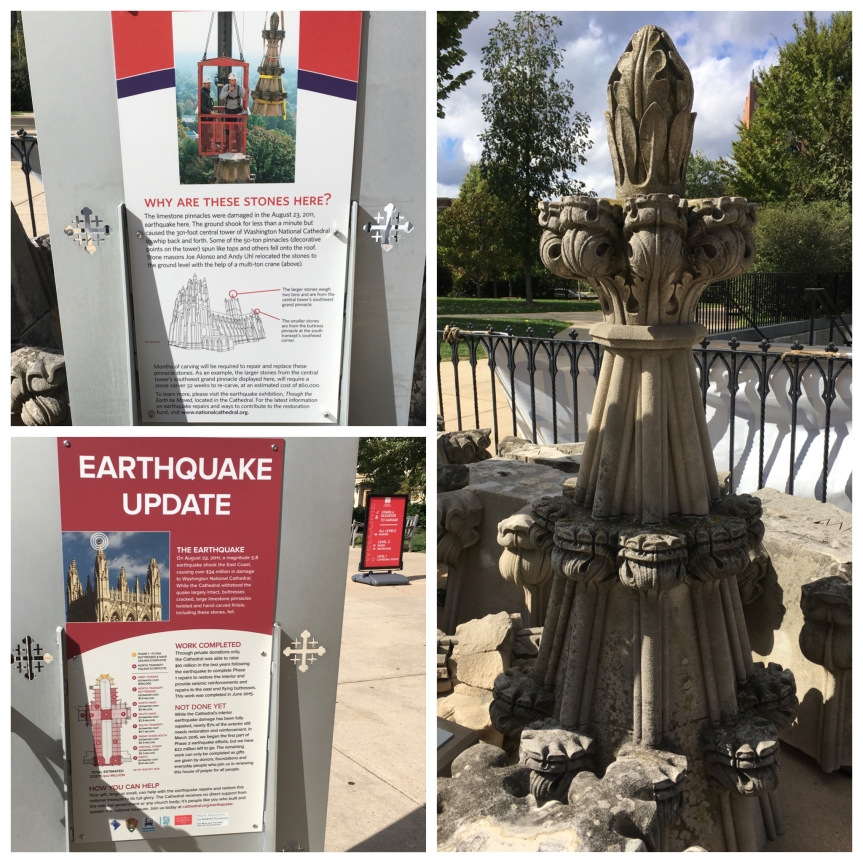 When at first you arrive at the Cathedral, the first thing you’ll notice is the update on the post 2011 earthquake repairs to the only recently completed Cathedral (1990), and a plea for funds so that they can complete the job. Personally, while construction had begun in 1907, I have to wonder why as it progressed modifications had not been instituted to keep it up to modern earthquake standards. 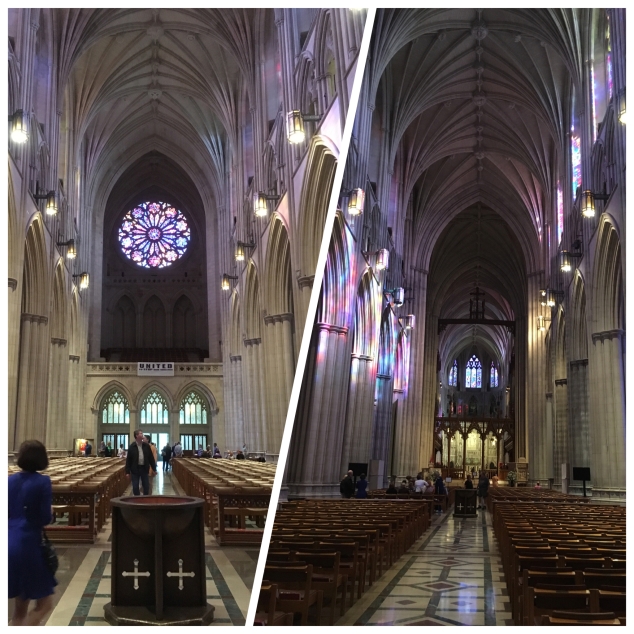 When you enter the Cathedral at the check in counter you tell them you’re there for the high tea, and they don’t even bother to check a ticket or compare your name to a list. (That said, one way to get in and avoid admission on a weekday is to time your visit to when folks would be arriving for the tea, and just say that’s why your there.) Once you are inside the church proper, you are immediately impressed by it’s grandness, which is on par with some of the greatest medieval built Cathedrals of Europe, but with a lot of very modern touches (earthquake proofing construction not being one of them).

Notably, the stain-glass windows are on the whole far more modern than what I would have expected. One of them, which I could not get a good shot of, is devoted to the exploration of space, and includes a moon rock provided by NASA. And many of the windows have a sort of ‘cartoonish’ aspect to them, rather than the sort of classic stained glass you normally see in churches. 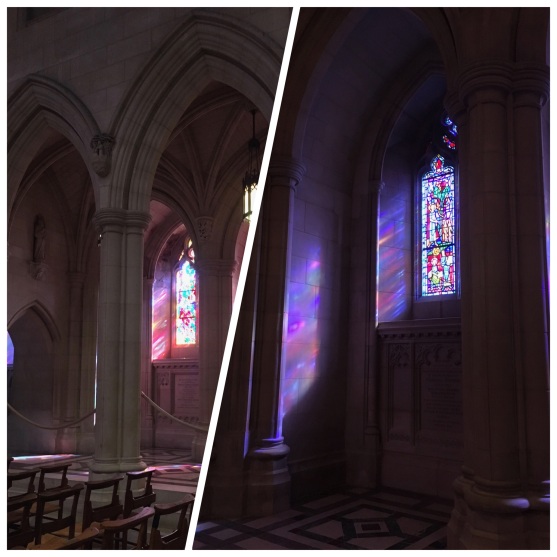 My favorite window however was fairly traditional… and pretty clearly devoted to Jews and the old testament: 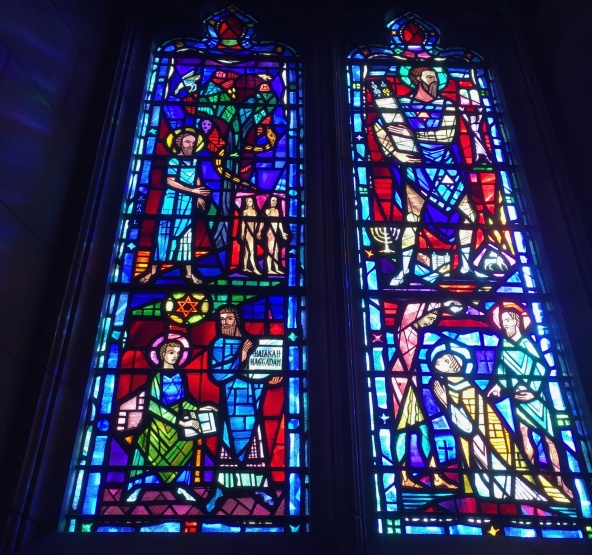 About 30+ people had shown up that day for the tour and tea, and first they spoke to us about the Cathedral 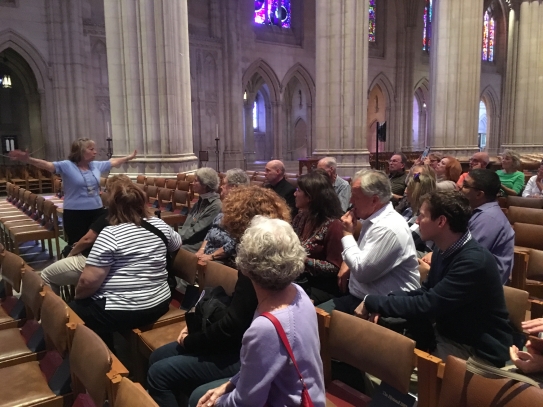 and then of course showed us some of it’s high points. 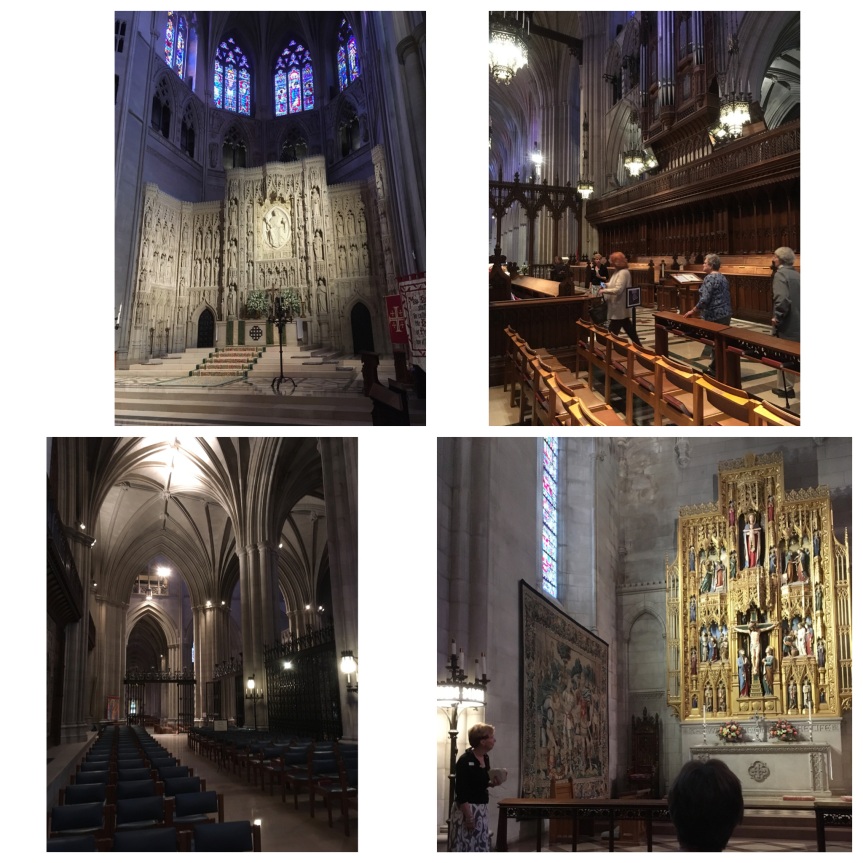 HOWEVER, as Cheryl had already done the generic cathedral tour twice before, I had signed us up for their “Nobel Prize” tour, which highlights aspects of the church devoted to that; this is a tour only offered a few times a year, and these are some but by no means all of the details they pointed out to us… 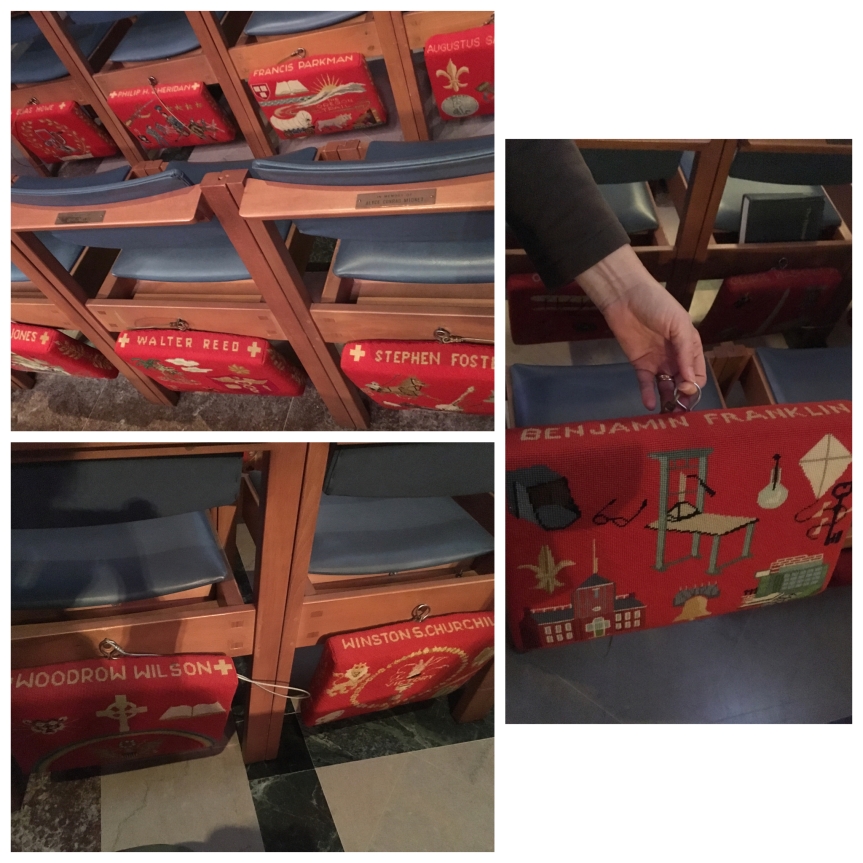 Kneeling cushions devoted to Nobel Prize winners, and and other notables. While Ben Franklin obviously could not have won the Nobel as it was not created till well after his death, he did win the Copley Medal for his work with electricity, which is given out the UK’s Royal Society, and was an early equivalent.

After the tour they took us all upstairs to have our tea. Cheryl and I were lucky in that we had a window seat: 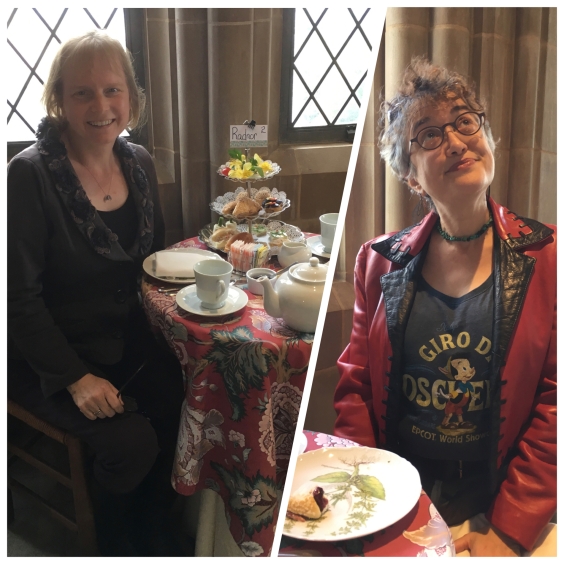 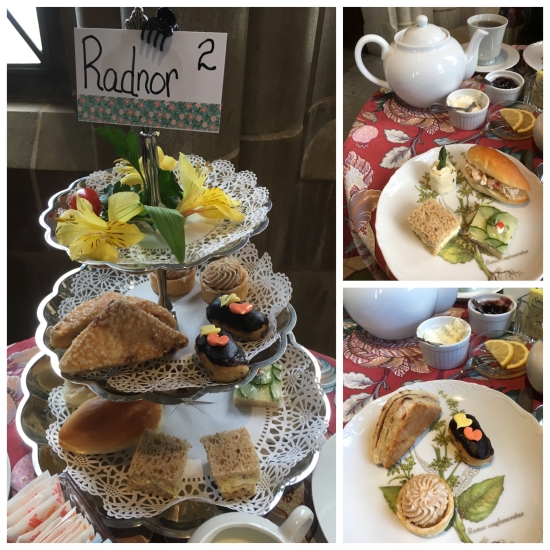 While very tasty, as you can see the sandwiches and desserts are for the most part “finger food” or appetizer sized portions, so our hunger was soothed, but the meal wasn’t filling enough so that we had no appetite for dinner.

After our tea was over, we explored the top floor and the windows other groups were sat next too, taking in the various views offered 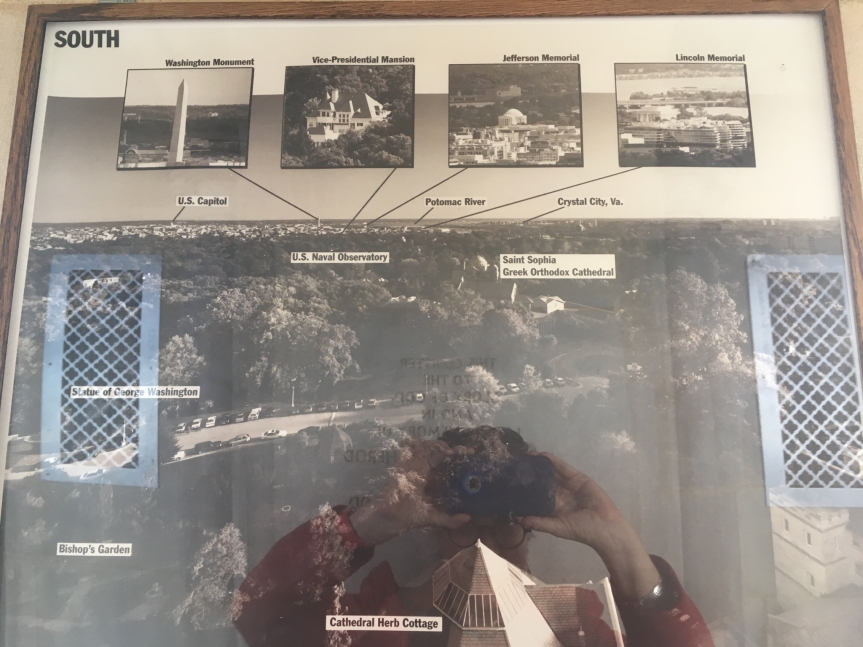 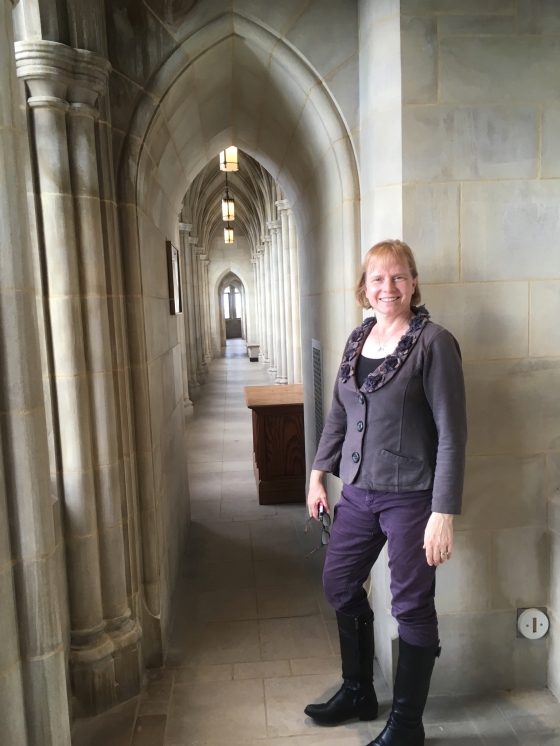 After the Tea we went down into the basement of the Cathedral, which the tour had not gone to and explored it…

In addition to the massive gift shop the basement holds more crypts, chapels, and is something of medieval architectural delight 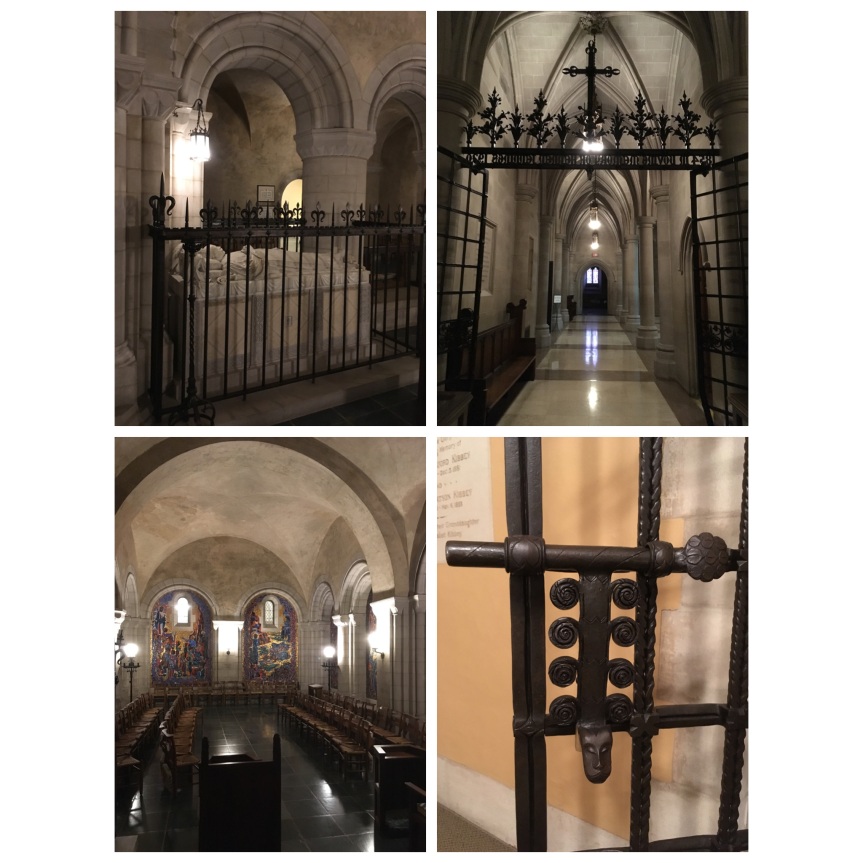 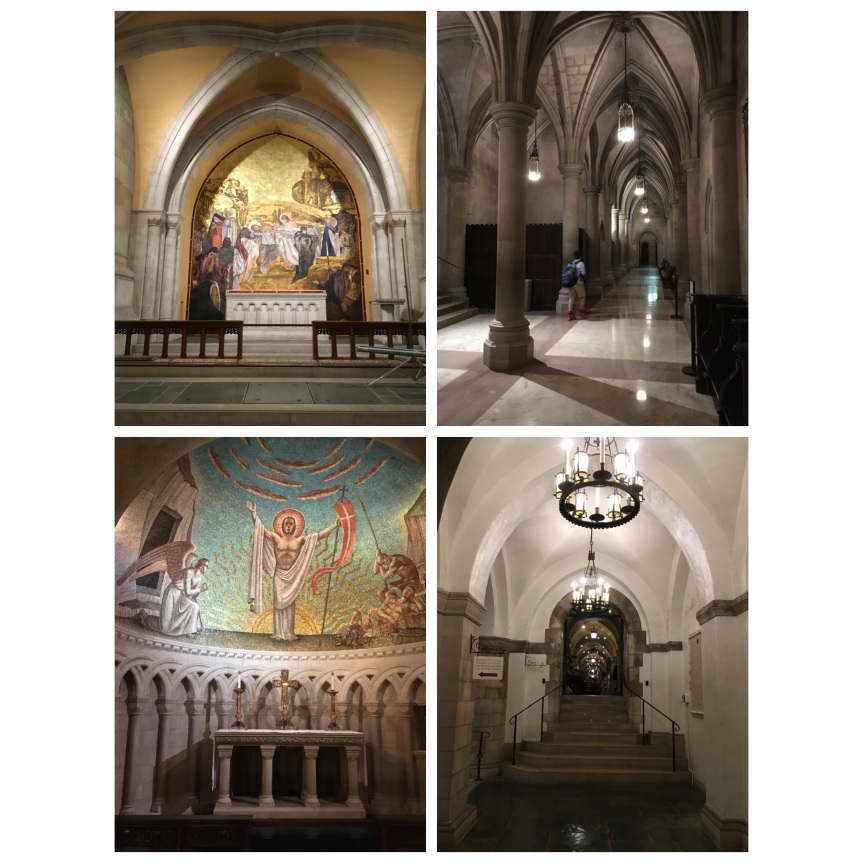