Museum dedicated to a medal. Currently located in a mall, but expected to move back to central Chattanooga soon.

This is a tiny but very interesting museum that should not be confused with the larger Museum that is being built in Mt. Pleasant, South Carolina. I had a published pamphlet advertising it, and had called previously to confirm that was open and that it was really located in the mall… all of which turned out to be a very good thing, because if I had needed to rely solely on folks who worked in the mall to direct me, I’d have left feeling lost and annoyed; as it was, once I was at the mall I quite literally had to ask seven different staff members for directions before I found one who even know it was there and could direct me (and none of her fellow workers had any idea about it and laughed when they learned it was there and had been there for a while; One even realized she’d walked by it daily, and never saw it).

Like I said previously, the first medal of Honor was given for the civil war campaign called “The Great Locomotive Chase” (which, not surprisingly, Disney made a 1956 movie about) that occurred during the Civil war and ended in a tunnel near Dalton Georgia, where some union soldiers tried to steal a confederate train, take it back up north to Chattanooga, and do as much damage to the strategic rail line as possible along the way, hence the existence of this museum in the Chattanooga area. This museum used to be downtown and according to the docent, intends to move back there soon. The guy running it was a young war-geek guy, maybe 27 years old (where most docents are retired elderly people) who seemed to know a heck of a lot about every aspect of the museum. From what I could tell this was sort of a dream job for him, where he gets paid to sit around all day reading every book he could get his hand on about medal of honor winners, and shares that knowledge with visitors.

It’s a small place, but it’s packed to the gills with information about the medal itself, it’s history, and placards describing some of the more outstanding individuals who had won the medals. Among the ones that peaked my interest was the only medal of honor ever given to a woman, Dr. Mary E. Walker, which — according to the docent, was then taken away from her because women weren’t in the military (only she refused to stop wearing it), but the right was later returned to her posthumously. She had been a volunteer Union army surgeon who had been taken captive when she cross enemy lines in order to help wounded civilians, and declared a spy (probably because they couldn’t believe she was a doctor) 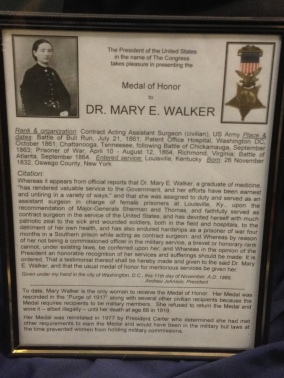 Among their fairly large selection of original medals and historic artifacts, was special cash brought back by WWII soldiers that had been created by the nazis for Jews to use within the concentration camp of Theresienstadt, which I’m not sure I ever saw before. For those who don’t know, Theresienstadt was a mediveil walled city which the Nazi’s had converted into a Ghetto for Jews, and as something of a waypoint to the extermination camps. Mostly however, they also used it for propaganda purposes, making movies about it claiming it to the world that it was an example of many Jewish resettlement areas, and an area they allowed the red cross to visit to prove the lie.

And of course, we can’t forget everyone’s favorite Medal of Honor Winner, Audie L. Murphy who initially tried to enlist at 17, then won the medal of honor for valor he showed in battle when only 19, and then became the most decorated hero of WWII (33 different awards) when he finally left the military at age 21; and if that weren’t enough, he then went on to be a fairly successful hollywood star who even performed in a few movies that went on to become classics, including as himself in “To hell and back” his own life story.